AREITO STUDIOS IS IN CENTRAL HAVANA, on Calle San Miguel, just where the colonial old city transitions into the more modern one. It was built by Panart, the biggest record label in Cuba before the Revolution. In the late summer of 1991, when Jane Bunnett recorded Spirits of Havana there, the big room upstairs was out of commission, with its grand piano in pieces on the floor, so we were in the smaller room on the ground floor - not a small space by any means, but very much filled up with the musicians who'd been asked to back Jane up for her first Cuban record.

The first thing I saw every morning when I walked to the studio from my hotel was the musicians hanging out on the street - a sight that had probably been common since Panart began recording there in the late '40s. Combined with the city around it, mostly preserved as it was around the time Batista fled, it had a time machine aspect; this is probably what Manhattan's 42nd Street or RCA Studios on 24th St. was like when jazz was still pop music.


Jane and the band had spent the first week in Havana rehearsing tunes, but this was still a step into the unknown - the first big step into Latin music for Jane, with musicians from a different tradition, who had grown up and learned in a place that was relatively isolated from the jazz world she'd come up through. Time was short, though, and it had to work - language barriers had to be crossed and musical relationships formed on the spot.

The musical backbone of the band was Yoruba Andabo, a group of singers and percussionists formed in Havana's docks in the early '60s. A mix of older and younger musicians, they made the whole affair seem epic - an orchestra of men and drums who either filled the studio or the courtyard and street outside for most of the recording sessions.

At one point during the week I took them out into the courtyard to take a series of portraits; with my film supply running low, I budgeted three frames for each man - framing them each on the left and right hand side of a horizontal frame, then once in a vertical shot. Here are a few of the best: 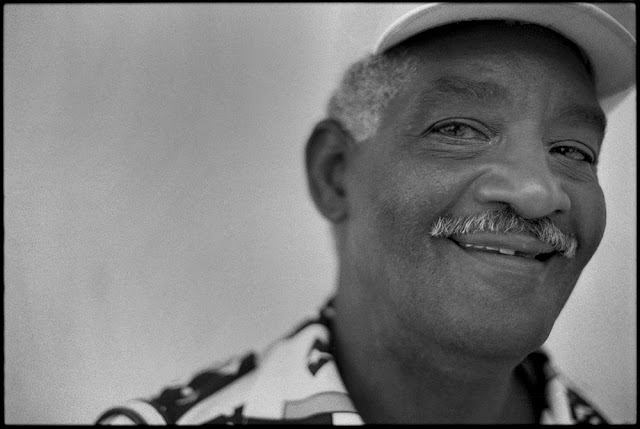 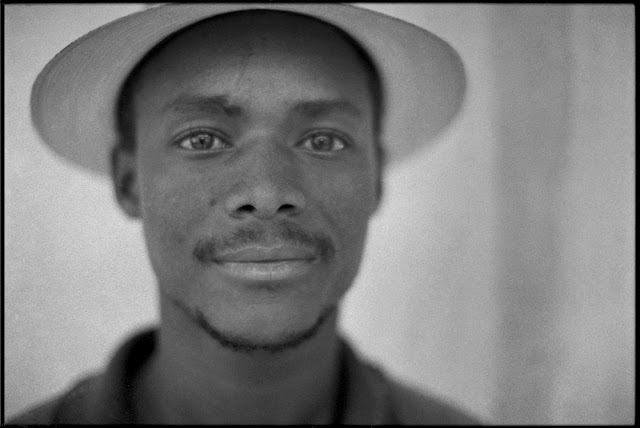 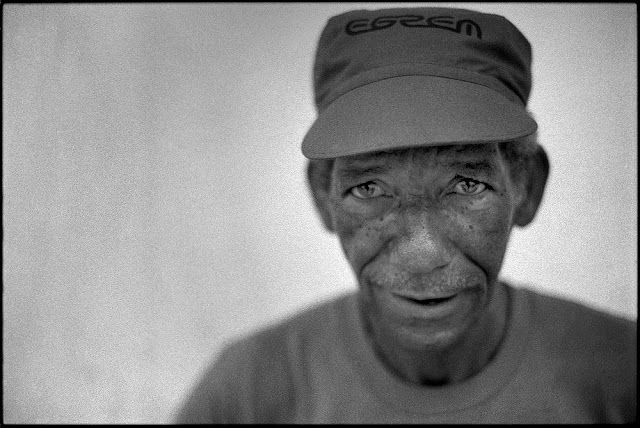 Jane's biggest asset during the recording of Spirits was percussionist and arranger Guillermo Barreto, a legendary figure from the golden age of Cuban music. A veteran of Afro-Cuban bands who once filled Buddy Rich's drum chair for a night in Stan Kenton's band, he was the bridge between the two musical traditions, a whirlwind of sound and movement as he helped set Jane into the sound being produced by Yoruba Andabo and a trio of pianists - Frank Emilio Flynn, Hilario Duran and Gonzalo Rubalcaba.

I found it hard not to like Guillermo. An insistent, cajoling chatterbox, he'd acquired the nickname "El Loro" ("The Parrot") from singer Rita Montaner back the '50s. He was a theatrical presence, shouting and scowling and hammering out rhythms on his timbales to make a point, hell bent on getting everyone on the same page. Like the studio and the street outside, he was a relic of a time when recordings were live and nothing got fixed in the mix. 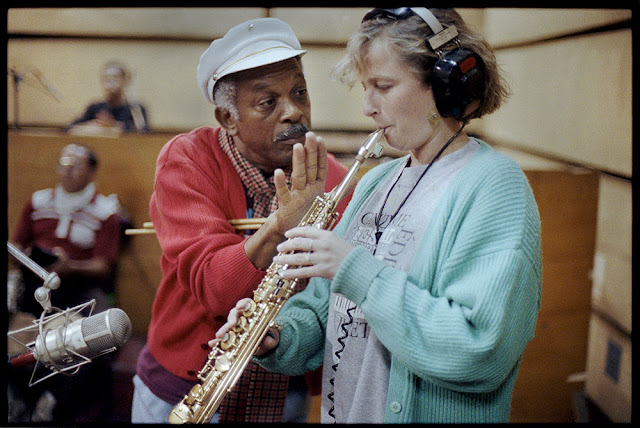 If you've ever spent time in a recording studio, you learn quickly enough that it's only slightly less painful than a movie set. I had the luxury of being able to absent myself for a few hours or a day if I thought I'd gotten needed photo coverage, but Jane, her husband Larry, Guillermo and producer Danny Greenspoon had to be there every day, and occasionally the stress of making a whole record with a huge band in barely a week was palpable even after a brief absence. 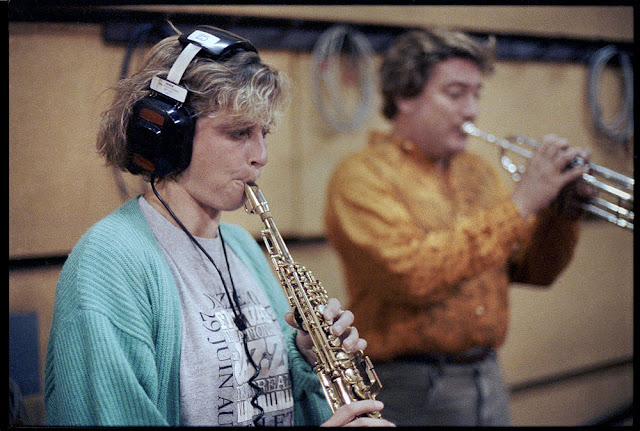 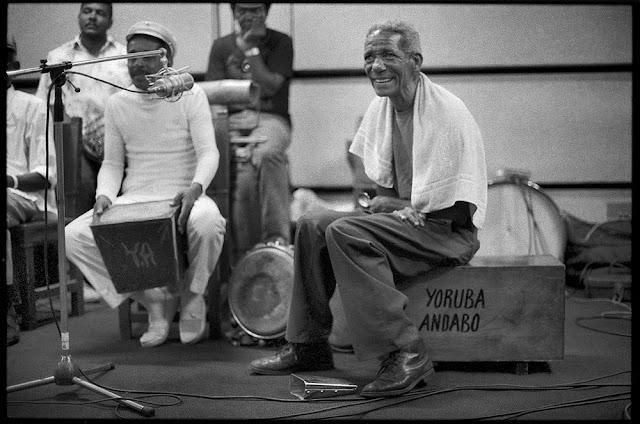 Glamour was provided by Guillermo's wife, singer Merceditas Valdes, who Jane had met when she'd toured Canada a couple of years previous. A tiny woman, she was as lively and charismatic as her husband and seemed to draw the considerable energies in the packed studio around her when she did her vocals. 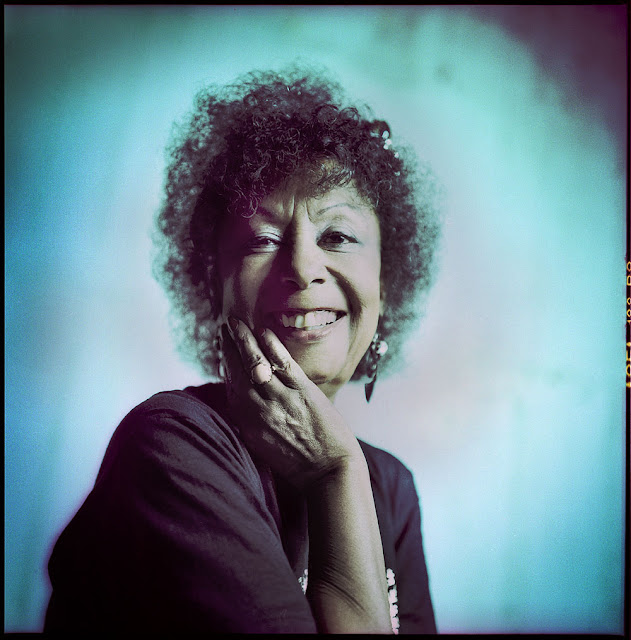 I did a couple of cross-processed rolls of portraits of Merceditas and another with her and Jane, though they never ended up getting used on the record package when it finally came out almost two years later. I was in the thick of my cross-processing period in Havana, and did the shoot for the record's cover with 400 ASA Fujichrome the previous week, taking Jane around to Cathedral Square and the park-lined boulevard outside my hotel, just down the street from the old Capitol and the Gran Teatro.


The frame at the top of this post is the one just adjacent to the one that ended up becoming the cover of Spirits of Havana. I've lost track of how many different releases the record's been through, but the original Denon Canada cover is still my favorite.


If there was ever another contender for the cover shot, it was probably this one, taken in Cathedral Square back when it was usually empty and not a market or performing space. There's talk of a new version of the record on its 25th anniversary next year, so I might get another shot at the cover; in any case, some more of the work I did during those two weeks in Cuba could end up being seen for the first time.

Spirits of Havana was a pivotal record for my friend Jane. She was a pioneer - one of the first North American musicians to record in Cuba with Cuban musicians since the '50s, and you could argue that she created a new network that would eventually go overground with Ry Cooder and the Buena Vista Social Club recordings. She's still at it today, playing with musicians like Hilario Duran, who now lives here in Toronto, and with new ones like the young women in Maqueque, with whom she's currently been recording and touring.

I'd end up back in Cuba myself, not long after this, with my camera and on assignment for Jane. This time, though, I was alone, and the work would look very different.

Guillermo Barretto died in Havana on December 14, 1991, two months after he finished recording Spirits of Havana.