TURNER LIKED SQUARES. I was excited to learn this at the Turner show currently running at the Art Gallery of Ontario. I'm a big fan of Turner - and of squares, going back to my first medium format camera and especially the Rolleiflexes I used for so many years. One of the great features of my new Fuji digital camera is the 1:1 frame option, which I use all the time. The square is magic, as far as I'm concerned.

I've been spending a lot of time at the AGO lately as youngest daughter has been enrolled in a life drawing class there. Which means that every Sunday afternoon I've had two hours to kill, and since you can only drink so much coffee or eat so many muffins, I've been bringing my camera with me. Photography was allowed at the Turner show, which meant I could capture some of the small details in his canvases, little near-abstract sketches scattered amidst the bigger composition. 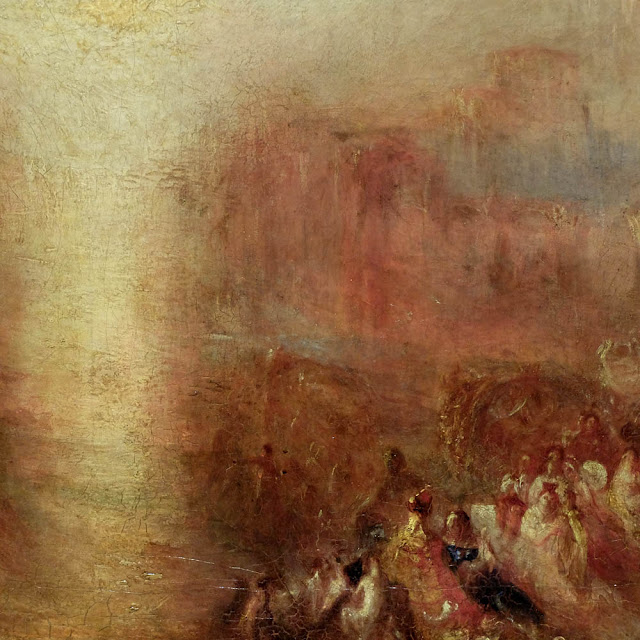 I never went to school for photography. The extent of my photographic education was the friend who told me the developing times for home darkrooming (and he got those wrong!) Whenever someone asked me how they could learn more about photography, I usually told them to just buy a big box of film, put aside money for developing and shoot, shoot, shoot. Digital imaging has simplified this to just the last instruction, which is probably why the world seems suddenly flooded with photography.

With just two hours, my Lord's Day photo walks were limited to the neighbourhoods adjacent to the art gallery - Chinatown, Alexandra Park and Kensington to the west, the university to the north and the hospital district to the east. I was blessed with good weather almost every Sunday for the last couple of months, so here's a selection of what I saw.


The one thing that never changes about a city is that everything always changes. Last year, when my daughter was enrolled in a cartooning course at the AGO, I brought along a camera, and ended up taking a few shots of this bit of late '60s modernism at the corner of University Avenue and Dundas West:


This is the future of my childhood - a future that was probably intimidating until the weather began wearing at it; sharp eyes will notice the metal straps bolted to the thin upright sections between windows, little band-aids holding together a sick building. Nothing looks sadder than an old future gone sour.

A year later, that monolithic monumentalism was being peeled away as the building is transformed into an office/condo complex, with a new exterior and some additional storeys:


The building is literally being skinned alive.