THE "SPECIAL PERIOD" BEGAN IN CUBA IN 1990 when the Eastern Bloc began to dissolve and the USSR withdrew aid to the country. I arrived in Havana in late September of 1991, two years after the fall of the Berlin Wall and just a month after the "August coup" that finally ended ended the Soviet Union. Cuba was on its own now, and years of shortages and economic scarcity had begun in earnest.

I'd been invited by my friends Jane Bunnett and Larry Cramer to tag along with them as they recorded Jane's first album with Cuban musicians in Havana. I brought my cameras and as much film as I could afford, and while Jane and the musicians rehearsed for the first week before heading into the studio, I wandered around the city.


Home base for the first few days was the Vegas-like but slightly shabby Riviera in Vedado, but my roommate Howie, Larry's brother, convinced me that we needed to be closer to Havana's old downtown. So we moved to the Inglaterra, just next to the Gran Teatro, a block from the capitol building, and a short walk to Areito Studios, where Jane would be recording..

Apart from several trips to New York City, this was the furthest from home I'd ever traveled, and the closest to the Equator. The days began bright and hot and the humidity hit you like a wall when you left your hotel. I was dizzy not just with the heat and light but with the colours - the faded tropical palette of pink, green, yellow and blue - and the street life, teeming and busy most of the day and night despite the fact that what shops there were had nothing to sell. 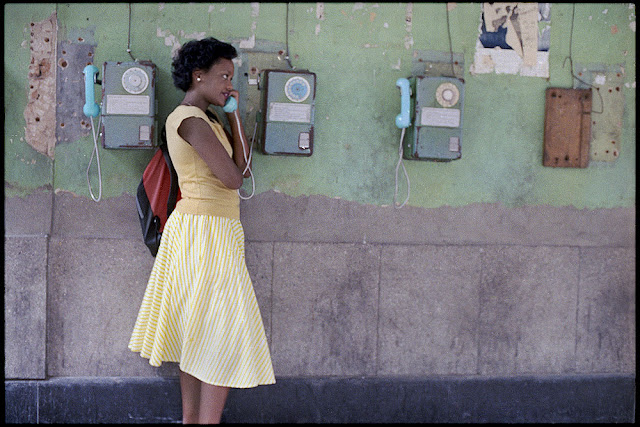 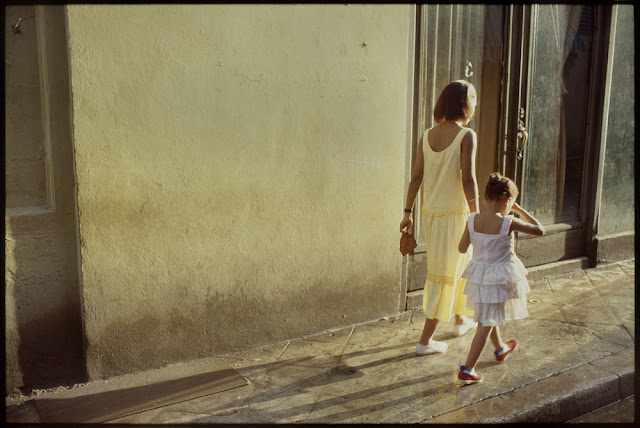 Perhaps it was the strangeness, or being so far away from the comfortable routine of Toronto, but I found myself becoming the street photographer I'd only dared to be once or twice before. Striving to avoid the old cars that were already a visual trademark, I ended up focusing my Nikon on what I saw on the streets; my contact sheets from this trip are full of people, in the studio and on the streets.

It helped that Cubans, at least then, were friendly and - when they weren't posing and mugging for the camera - unselfconscious when I pointed a lens at them. It probably helped that, with the heat and almost complete lack of air conditioning anywhere but in the hotels, people lived on the streets and treated them like their living rooms. On the Prado and the Malecon - the long seaside boulevard - they did their living very much in public. 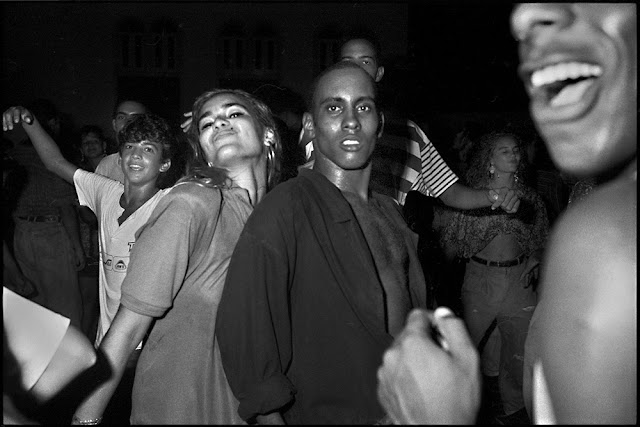 This was especially true at night; denied access to the hotels, they put speakers in windows and turned up car radios and danced on the street, in couples or alone. Official nightlife was scarce, and what little I saw of it was meant mostly for tourists or Party and government officials and their families, so block parties and static cruising seemed to be the pressure release for almost everyone under fifty, tolerated by the authorities.

I occasionally saw that authority exercised in the most arbitrary ways, like when Cubans sat with us in hotel bars or restaurants, and had to be vouched for when police made their frequent sweeps. Even more arbitrary were the notorious ID checks of black Cubans by white police, one of which I caught on film in the middle of a busy shopping street.


I walked next to the police and took the viewing prism off my Nikon F3, fiddling with the camera and cursing while snapping the shutter, framing at waist level. I'd heard about these random ID checks before I arrived in Havana, and while their purpose was never clear, it ensured that everyone carried their papers with them at all times - a low tech but effective form of state surveillance.

My camera seemed to make the police nervous but as a tourist - and a valued source of much of the island's sorely needed economic activity - I knew I wouldn't be bothered. After the police finally returned his ID, the man in the striped shirt walked past me and whispered "Thank you very much."

My favorite photographic subject in Havana were the kids, which was a surprise to me as much then as now as (fatherhood notwithstanding) I've never been much for kids. In Cuba, however, they were brash and engaging and at ease in front of the camera; like everyone else they lived on the streets, free and unsupervised in a way that kids back home were already rarely allowed. 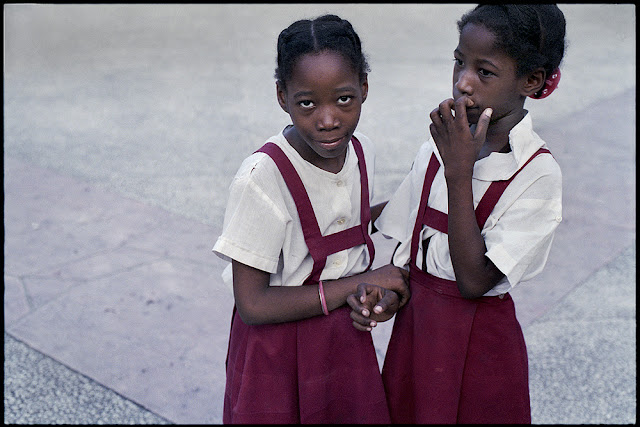 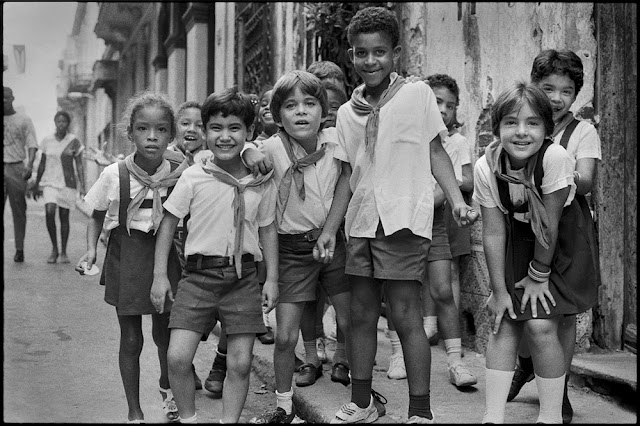 Some kids seemed fascinated by me - tourism wasn't nearly as big as it's become today, and Old Havana wasn't crawling with photographers - while others went about their business in the curious time warp of the old city. I had to keep reminding myself that this wasn't just a terribly picturesque backdrop for me to take my photos, but the scene of people's lives; the shabbiness and decaying buildings might have looked smashing, but I knew that any Cuban would have traded them for reliable electricity and full shops.

On one of my strolls through the old city I spotted a sign hanging above a storefront advertising the Circolo Fotografico Habana Vieja. (Don't bother Googling it - if they're still around, they reside like most of the country in a vast territory unmapped by the internet.) I'd already tried to buy film in a store near my hotel that featured a loving display of Eastern European film packaging in its window, only to be told that they had nothing to sell me. I wanted to talk to some fellow photographers here about how they did their business in a place when film and supplies were clearly unobtainable luxury goods. 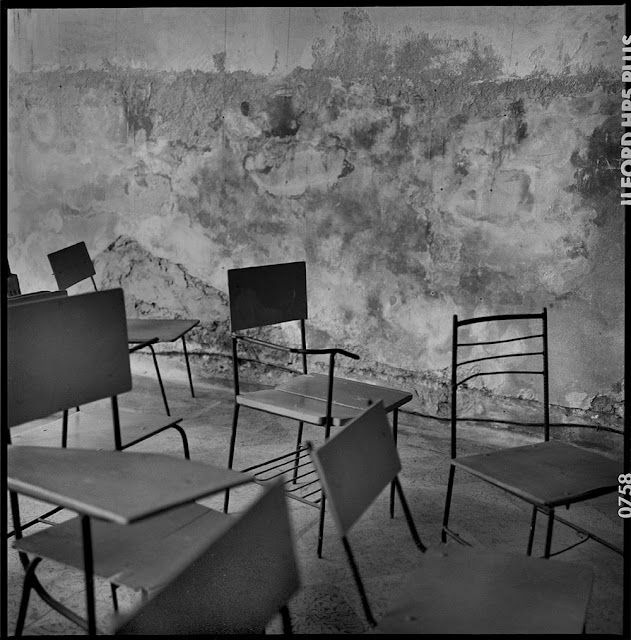 My timing was serendipitous - they were just finishing a meeting and I learned that keeping cameras working was a job only slightly more difficult that servicing the vintage cars on the roads, and that film was so scarce that, when you finally got a roll to load into your camera, frames were shot with great care and planning.

Their clubhouse, while yet another picturesque tableaux of decaying walls and salvaged furniture, was tidy and their meeting well attended, and after snapping a couple of frames I took everyone outside for a photo. I wanted to share some of my film with them, but after nearly a week in the city and with recording sessions still ahead to come, I knew I had to hoard every roll I had.

My first trip to Cuba left me uneasy - only a few days in, I had John Lydon and the Sex Pistols' "Holidays in the Sun" running through my head ("A cheap holiday in other people's misery") and wondered how long it could go on like this. After a few more days I began to realize that Cubans could endure this and so much more, thanks to some accident of climate and geography and national temperament, and despite their government's crude but apparently effective machinery of oppression.


This photo - snapped with my Rolleiflex in the lobby of some government building in Vedado where we were waiting around for reasons now completely forgotten - summed up my first trip to Cuba. Heat-struck and enervated by too much history, Cubans seemed willing to put up with so much since, living in the aftermath of one revolution, they were sure it would be entirely too much to cope with another.

While scanning these photos, though, I couldn't help but think of the kids in my shots. Almost twenty-five years later, they're all in their thirties now, the grown children of the Special Period. They've seen that change happens slowly, almost imperceptibly, and with the same old men in charge of the same old policies, I don't imagine that the lifting of the U.S. embargo after fifty years will mean anything radical in the short term. They deserved something better.

SCANNER UPDATE: Thanks to the generous donations of several friends and readers, I was able to replace my tired and failing HP scanner with a brand new Epson, the first results of which are showcased on this post. I'd like to thank Kathy and Arnie, Tim, Chris, Peter, Warren, John and James for supporting this blog and my work - you will always have my gratitude in this uncertain time in my career. I hope you'll continue to enjoy the work I'll continue presenting here as long as I have negatives to excavate.