MY CAREER AS A TRAVEL WRITER AND PHOTOGRAPHER begins nearly twenty years ago, in Spain, with a very definite failure. I was very underemployed when a novelist friend told me about a travel junket he was going on, and said that he'd try to get me on the trip. He was sure I could sell the story and photos later, and I was eager to return to Spain after going there with K two years earlier.

It was a strange trip. My novelist friend managed to get Bob, another buddy of his, on the junket, and the three of us formed an unruly group all week, made a foursome by Vincent, a writer from La Presse in Montreal. A few days into the trip my cat Nato died. I got the news from my novelist friend over breakfast one hungover morning in Burgos; he had been told by his wife, a friend of K, on the phone the night before.

The effort of keeping my grief in check coloured the whole trip, and probably explains why the photos I came back with seem so elegaic and mournful. In any case, they weren't the kind of work with which I could likely sell a travel story package, and in the end I never did. This is the first time any of these photos have been published anywhere.


My guidebook for the trip was The Cities of Spain, a frequently splenetic travelogue published in 1925 and written by Edward Hutton, an Englishman and aesthete whose marked preference for Italy is hard to ignore in his dismissive commentary about the decrepitude of Spain and what he often regards as its second rate art and architecture. It was a strange book to use as a guide, but it was amusing to compare the backward, pre-Franco country he described with the very modern one we drove through.


I kept a detailed diary of the trip at the time, but neglected to make careful notes of what I was shooting day by day. As a result, most of my black and white shots are hard to give a precise location to, nearly two decades later. It's worth noting that while my subject matter was decidedly mournful - cloisters and sarcophagi and picturesque ruins - it wouldn't have been a drawback to hand in black and white photos for a travel story back when most newspapers only used colour for front pages. 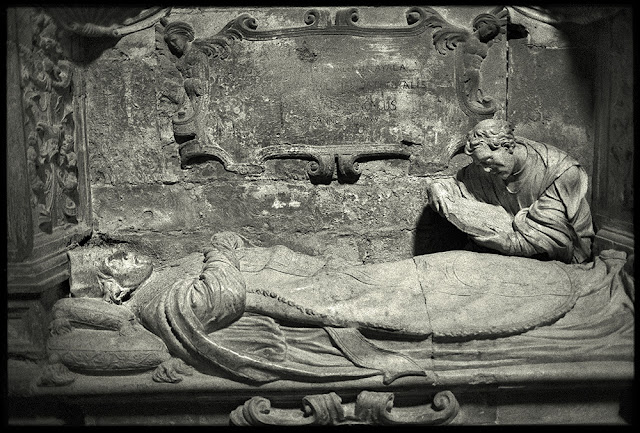 The trip began in Madrid, where half of our group had lost their luggage on the flight over, and moved on to Logrono and Najera, Rioja, Burgos, Silos, Vallodolid, Salamanca, Avila and back to Madrid. The theme was wine, religion and Cervantes, in varying proportions, and by the end of the trip our little group of writers and photographers were well and truly sick of each other, and of our little (usually) drunken quartet in particular. 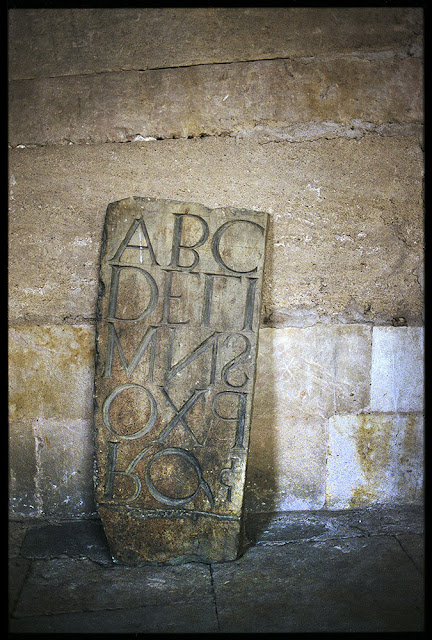 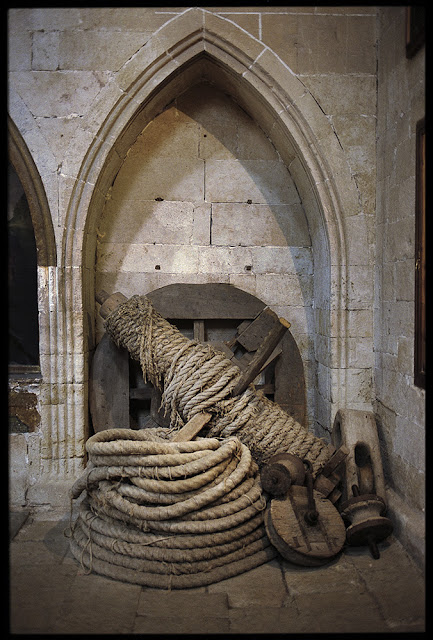 Without a client or experience, I came back with very few vistas or beauty shots and a lot of gloomy photos of medieval stonework and ancient detritus. I can't imagine how hard it would have been to sell the story, even if I'd found an interested client - which I never did. The low point was probably the bus strike that left us stranded in Avila, and the train trip back to Madrid, where I came down with a 24-hour flu. I sweated through the sheets in my hotel room while the boys went out for one last piss-up on the town.


With the trip over, I arranged to delay my flight back home for a couple of days so I could visit our friends John and Rosa in Barcelona. I was met by John at the train station, finally sober and healthy, and he took me on a tour of the town, where two old markets and several apartment buildings had been demolished and excavated by archaeologists. I slipped through a hole in the fencing around the Mercat de Santa Caterina to take my last, appropriately desolate photos from the trip.

Posted by rick mcginnis at 9:53 AM