EVERYBODY IS FASCINATED BY DEATH. At the turn of the millennium everyone was reading Boom Bust & Echo, one of those applied big ideas books, like Freakonomics or The Tipping Point, that seemed to explain nearly everything in one easy-to-grasp conceit. The big idea in Boom, Bust & Echo was that demographics were the key, and that if you wanted to predict the future or make a lot of money, all you had to do was figure out the largest number of people who were going to be in school, buying homes, having kids, retiring or dying.

I was particularly taken by the last point, and for years I'd tried to sell editors on a story about young people entering the funeral business, anticipating the massive boom that would commence as soon as the baby boomer generation started dying off. I was also interested in how the funeral industry, one presumed to be basically conservative in nature, would handle the demands of a demographic who were used to getting what they'd wanted their whole lives, and who had led massive social and cultural changes based on that combination of demands and numbers. 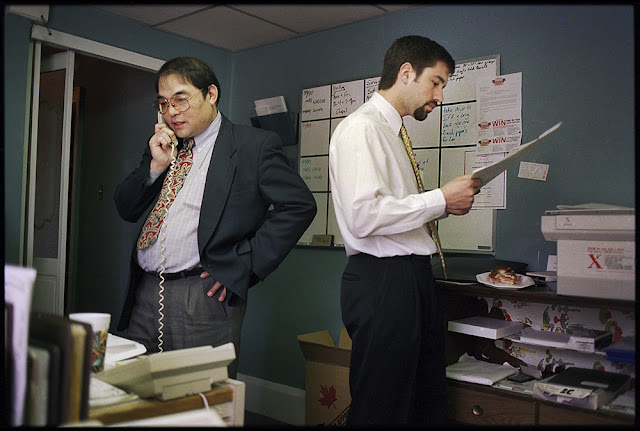 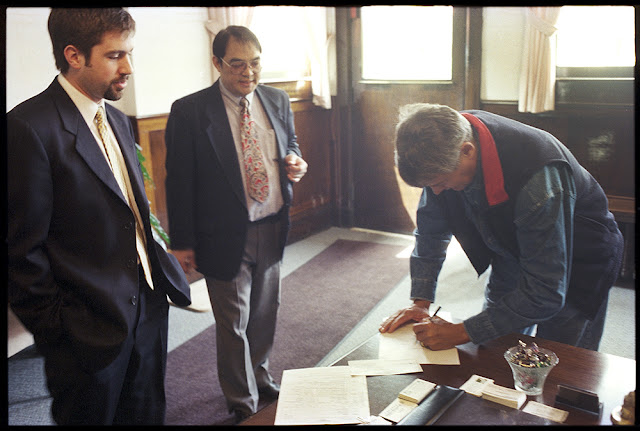 At what I perceived to be a critical point in my career, Saturday Night magazine bit at my story pitch, and I spent most of 2000 following around Steven Duquette and Stanley Chung, the proprietors of Bates & Dodds, a small, independent funeral home - the oldest operating one in the city - with a very interesting location, on Toronto's Queen West shopping district and across from the gentrifying streets around Trinity Bellwoods Park.

Steven and Stanley were very gracious with their time, and let me document their work with my cameras - provided I dress like them in a somber black suit and expressly request permission wherever I went. Steven, young and articulate, would be the focus of the story, and I shot portraits of him in the casket sales room at the funeral home and sitting on his Honda Shadow by the rear garage door where they took delivery of flowers, coffins and bodies.


One of the first things I learned was that being a mortician involved an awful lot of paperwork, to comply with the almost infinite number of regulations that applied to the funeral business. I was desperate to get them to talk about the abiding myths and preconceptions about their profession, and to wax philosophical about the nature of what they did, dealing with one of life's most profound and - to most people - terrifying absolutes.

They were remarkably casual and offhanded about it all, as were the many undertakers, young and old, who I interviewed for the piece, as I tried to create a compelling and resonant story for the magazine. I spent most of the year reading, researching, and spending time with the men from Bates & Dodds, accompanying Stanley on a Buddhist funeral one sunny day, and killing time (no pun intended) with Steven in the queue at St. James Crematorium, waiting for our turn to commit a body to the flames. 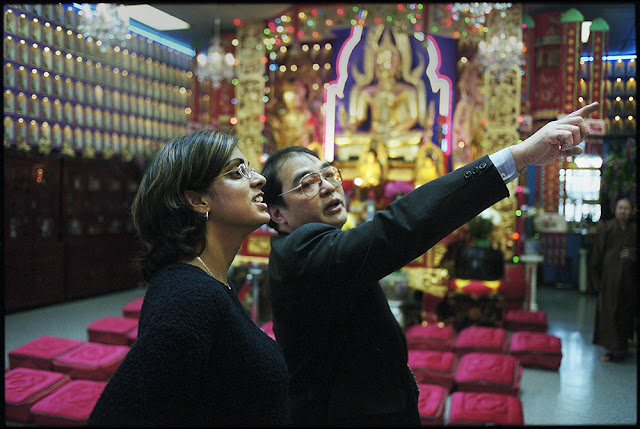 I shot a lot of film, did hours of interviews and took a lot of notes. This was the sort of story I thought I was uniquely suited for, as a writer and photographer; with every new draft and conversation with my editor, I imagined how it might look in the glossy pages of the venerable - over a century in print! - and award-winning publication. I was a devoted magazine reader, and at one point read over thirty a month, though most of my career had been spent working for newsprint publications. I was desperate for a change, and this story potentially showcased the best of what I did.

It was hard not to be fascinated by the more morbid aspects of the funeral business, and Stanley and Steven let me spend a lot of time and a few rolls of films shooting in their embalming room. But even more poignant was a dusty cabinet in a storeroom next to their office, where they kept cremains - cremated ashes - that had never been picked up after funeral services were bought and paid for. Some of these packages had been there for decades.

One dusty box, the earthly remains of Isobel MacFarlane, had been unclaimed since 1968. The label was from the (now-closed) crematorium at Prospect Cemetery. Today I live in a house right next to Prospect, and as I write this I can look out my office window over the wall of the cemetery to its veteran's plot and cenotaph. In retrospect, perhaps not everyone is as fascinated by death as I am. 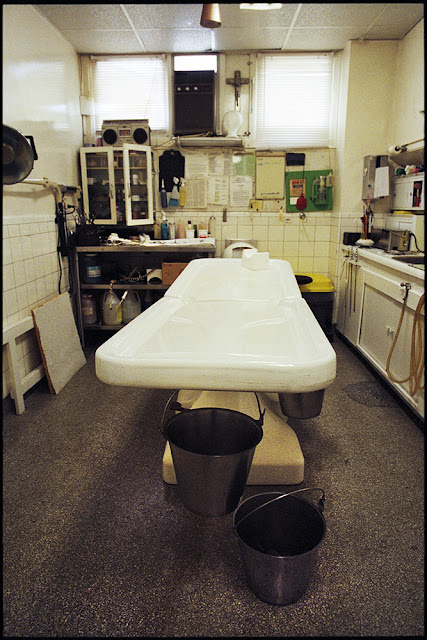 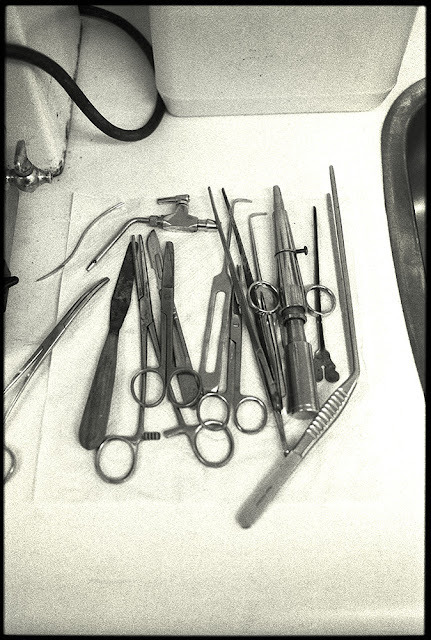 There were so many stories I could have written about Steven and Stanley, Bates & Dodds and the funeral business, but in the end I didn't write any of them. I'd hand in several revisions of my story, even more unsure every time as to what my editor was looking for. He was young, and from Montreal - a detail he never tired of pointing out - and seemed to want to spend more time at our meetings way up in Don Mills talking about music and music journalism. (A job and a world that I was desperate to leave behind in my past.)

Saturday Night was one of only two or three national general interest magazines in Canada, with a long history and a reputation that made it like a combination of the New Yorker, the Saturday Evening Post, Harper's and The Atlantic all rolled into one - a role that fell to it mostly because Canada is a big country with a very small publishing market, and barely able, even when publishing was healthy, to support four magazines when one would do.

The magazine was in trouble, however. Under a previous owner, I'd tried in vain to get a friend of my fiancee who worked as an editor there to assign me a story. We'd spend endless phone calls talking through pitches and getting one after another tantalizingly close to an assignment letter before they'd be shot down at one of their many editorial meetings.

Now under new management as a free weekend magazine distributed through the National Post, it seemed that even getting the assignment was no guarantee that I might ever see the story in print. I began thinking that Saturday Night was in the journalism business much as Hollywood made movies, with the majority of the effort expended in its offices and boardrooms devoted to preventing anything from getting published or filmed.

My editor, maddeningly vague the whole time, had me change the focus at least twice before telling me one day that they were thinking of running it as a photo essay. I went up to the office for one more meeting where I'd talk with the photo editor.

We had a mutual friend in my buddy Chris, and while I hoped that might have worked in my favour, our brief, largely wordless meeting mostly involved her glaring at me with what I can only recall as barely concealed hostility. I returned home upset and confused. This was not going at all well. One final phone call with my editor revolved around the question - mostly posed by me, expecting an answer for some reason - of whether they intended to run my story at all. The answer wasn't positive, and I was told to send in an invoice for a kill fee.

Saturday Night would be sold two more times. It went bimonthly and returned to the newsstands before the final owner ceased print publication in November of 2005, after one hundred and eighteen years. It briefly came to life again in 2008 as a blog, but was abandoned after five posts. The photo editor who seemed to hate me for some mysterious reason left publishing to run an artisanal food business. Bates & Dodds Funeral Home closed its doors a few years ago. The building is now a veterinary business.