THE TWENTIETH CENTURY ENDED FOR ME WITH A PAINFUL CRISIS OF CONFIDENCE. The business that I'd entered over a decade earlier was visibly contracting and the market for what I had worked so hard to do well - editorial portraiture, mostly - was disappearing. The frustration made me doubt myself and, despite having reached a level of technical competence I'd only dreamed about when I picked up a camera, I could feel my inspiration and creativity flag with every shoot.

If I wasn't feeling desperate, I wouldn't have taken the advice I'd read in some photo magazine and bought a cheap plastic camera. The logic was sold simply enough: If you'd spent your career relying on technology and gear to help create images - and if inspiration was diminishing despite your skill - it might be useful to eschew all those crutches and habits and try to create images without them. 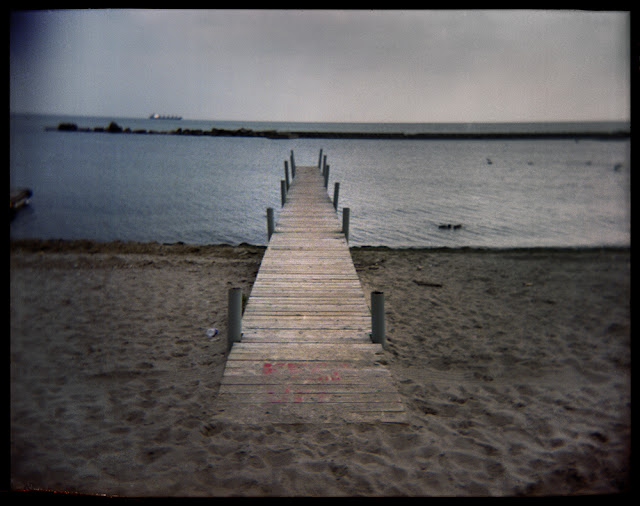 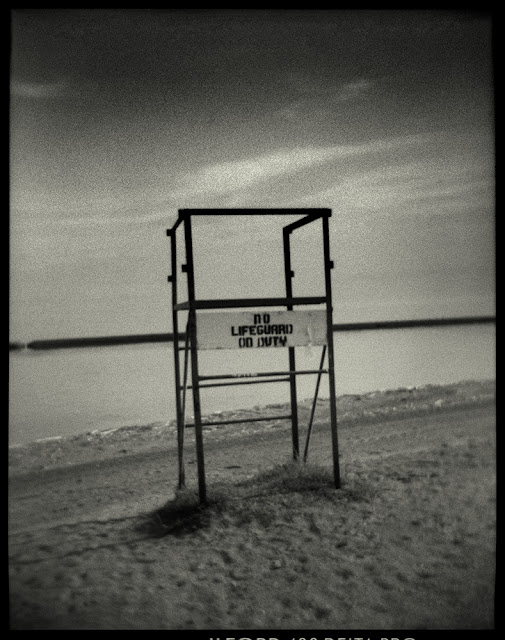 I picked up my first Holga plastic camera for $75 - they've actually got cheaper since then - and took it out for a stroll along the lake at Sunnyside, a place I've returned to over and over for inspiration. I loaded it with both colour and black and white film to see what kind of results I could expect, while trying to get used to shooting with no expectation of either precise composition or even sharp focus, which is good, because when the film came back I had neither.

What I did get was weirdly evocative shots that, on the contact sheets at least, looked like frame grabs from an old home movie. The imprecise focus in the centre troubled me, but I loved the way the images blurred out at the edges - an effect that would have been more pronounced if I hadn't bought the 120S model of the Holga, which is fixed to shoot only 6 x 4.5cm frames instead of 6 x 6cm squares, so the full effect of the camera's fuzzy optics is lost on two edges. 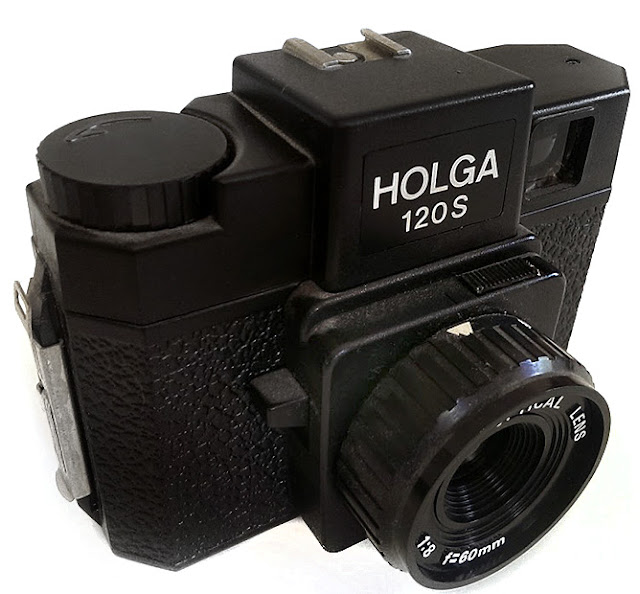 The Holga was invented in China in the early '80s, a cheap camera meant for the masses. It was built almost entirely out of plastic except for a few tiny metal parts in the shutter mechanism and the clips that hold the back on to the body. Thanks to its very basic construction and the plastic lens, it was prone to light leaks, spherical and chromatic aberration and practically every other flaw that's supposed to be designed out of a quality camera.

It never caught on in China, probably because it took inconvenient 120 medium format roll film instead of 35mm cartridge film, but even more probably because cameras got cheaper and better and made the many faults built into the Holga - its very approximate focusing mechanism, its even more loose rangefinder for composition, its single fixed aperture and shutter speed that makes it almost useless anywhere but on bright days - unendurable for the average buyer, even in communist China. Here, however, it developed a cult following that, a few years later, would coalesce around the Lomography movement.

I became hooked on the Holga, and took it out again to shoot a stroll through Mount Hope Cemetery, looking for the graves of my grandparents, then again to shoot across the rooftops from the deck of our apartment on Macdonell. It's been over a decade since we lived there, and I haven't been on that rooftop deck since before our youngest daughter was born, so this is how I remember it now - sky meeting asphalt shingles and roof gables, a vivid flash of the past fading as soon as it's recalled.

There was something about the frames on the contacts that evoked images from memory - indistinct and hazy, but with only some small random plane in reasonably sharp focus, like the mind trying to engage some fleeting moment of clarity but falling just short. I'd been experimenting with effects like these in the darkroom for years, using soft focus filters and tissue paper. With the Holga, however, this look presented itself with an added, and very seductive, element of chance. 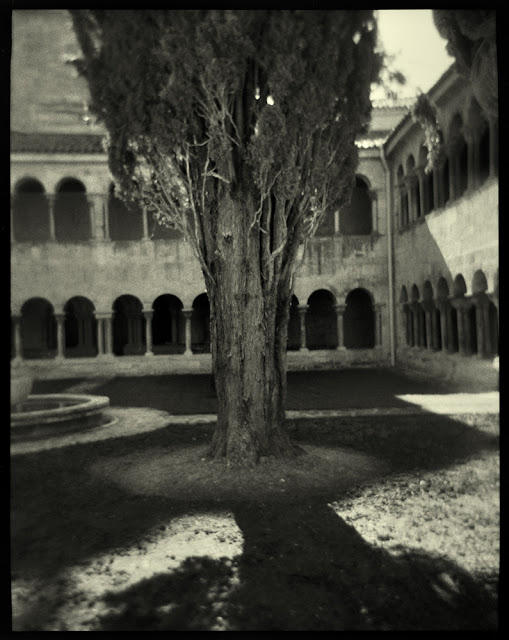 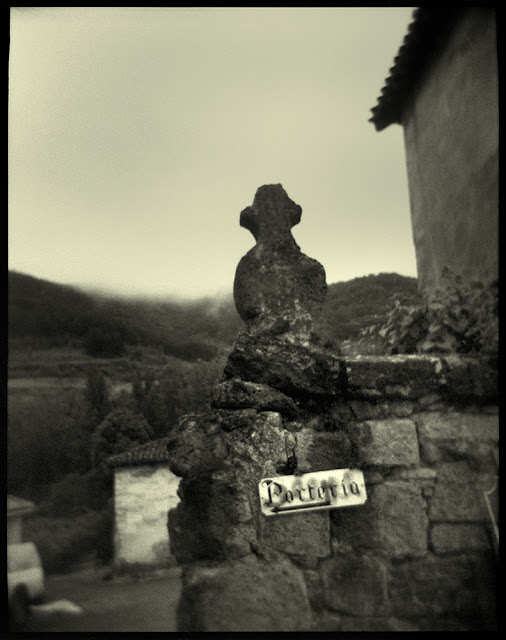 I took it with me again to Spain, tucked into my camera bag along with my trusty Canon SLR and a Kodak disposable panoramic camera. Thanks to the locations - and my choice of subject - the results were even more pleasing. I'd spent almost a decade trying to force sharp, modern lenses, film and printing papers to look like fading Victorian snapshots or the sort of  Pictorialist gallery prints that Ansel Adams formed a movement to rebel against.

But thanks to a cheap Chinese camera I finally got the look I'd been striving for - abetted today (and quite ironically) by digital tweaking in Photoshop. These frames - and especially the photo at the top of this post - are pretty much the best of my first year with the Holga. At the time, I couldn't be sure if they were helping me recover my inspiration for the rest of my work, especially since, within a year, I'd pretty much stop shooting professionally. But the Holga did make shooting fun again, even when I wasn't sure if I could truthfully call myself a photographer any more. 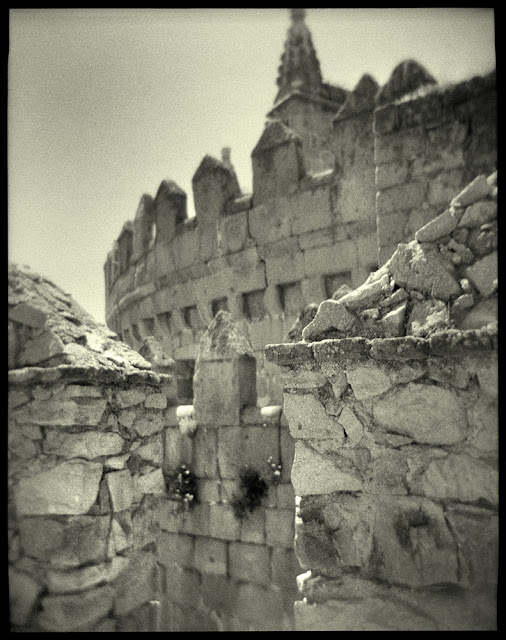