IT WAS HARD TO TELL IF TOBEY MAGUIRE WAS BEING DIFFICULT. I was shooting the young actor for a NOW magazine cover during the film festival, and his manner as soon as he got in front of my camera could only be described as coming from the point where diffidence becomes confrontational, if you can imagine such a thing.

I'm not sure if Maguire was at the film festival promoting Ride With The Devil or The Cider House Rules - perhaps it was both. He was a star, but nowhere near one on the level he'd reach three years later with Sam Raimi's Spider Man films. I'd enjoyed him in The Ice Storm, two years earlier - the best '70s period film really about the '90s ever - and would be just as big a fan of Ride With The Devil, his second film with director Ang Lee.

I wanted the shoot to go well. I was sure it wasn't. 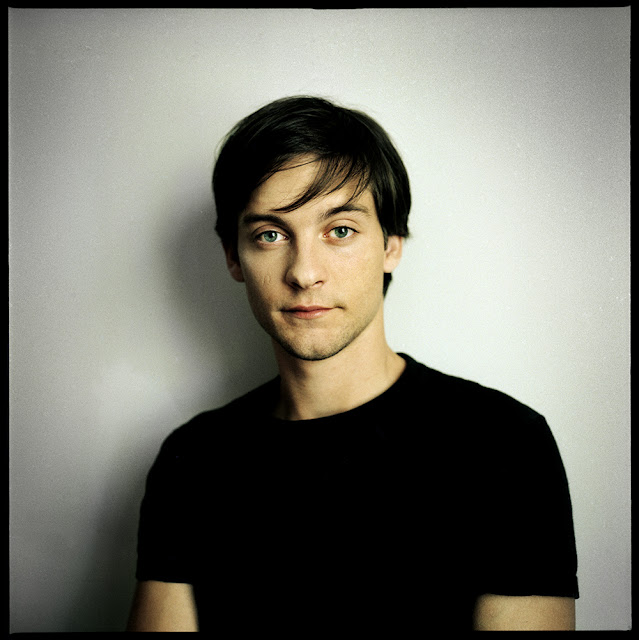 I don't give a lot of direction in a portrait shoot. Most of the time, I can rely on a subject to react to my seeming nonchalance by giving themselves internal prompts, trying to deliver what they think I want - or what they'd like to be seen doing in a portrait. As this happens, I might spot something that works and ask them to repeat it or even amplify it; Maguire was doing none of this.

It was as if we were having a staring contest with my Rolleiflex between us. Over the course of three rolls, the most I might have said was "Look away. Now look back at me." When it was apparent that I wasn't going to get much more out of him, I said we were done, to his obvious relief.


When I got the film back and made contact sheets, it became obvious that Maguire, young as he was, knew just how little he had to give to a camera in close up to register some sort of interior life. He had, more and earlier than many actors, learned the lesson that film acting is all in the eyes, and that most of the time we project most of the emotion we read into a performance.

It was a big lesson for me to learn at this point in my career, and I wish I'd been able to explore it a bit more at the time, but when I handed in the prints from this shoot a couple of months later, on the eve of the new millennium, it would be the last job I would do for NOW magazine.


My first NOW cover was a photo of Chuck D from Public Enemy, which came out in May of 1989 - serendipitously the same week that I was fired from my job in the classical music department of a big downtown record store. I had been sending the magazine photos on spec since the previous year, and would do so for a couple more months, but by the end of that summer I was getting regular work, and by the following year NOW work would comprise the majority of my income.

I began my career at NOW as the junior photographer, and felt like I remained so for almost the whole of my decade there. I worked with a group of photographers - Paul, David, Anne, Laurence, Susie, Algis, Debra and Ben - with years more experience than I had, whose work I couldn't help but admire. And I had the great fortune to have a sympathetic photo editor, Irene Grainger, who fought to give us the space to experiment every week, steadily pushing against the arbitrary edicts (the "big face" covers; no high key lighting) that came down from on high.

NOW was a steady gig that gave me access to celebrity subjects and, for a few years, the chance to travel for shoots - as much travel as I'd done in my life up till that point. As long as I kept my overhead low and held on to my Parkdale studio with its absurdly below-market rent, I didn't need to do much work that I didn't enjoy. I didn't have money for savings or big luxuries like a car or vacations, but my Cold War upbringing had taught me to keep my expectations low - hey, you'll probably be dead before you're thirty - so I never felt like I was missing out on anything.

Politically agnostic, I didn't really care much about the paper's politics as long as I was getting work. The first jarring moment, though, was when the employees of this very stridently pro-labour paper led a drive to unionize. Confronted with the obvious discontent with NOW's non-union status quo, publishers Michael and Alice reacted with dismay, even anger; I remember Alice complaining, tearfully, that she thought we were a family.

Despite our position on the masthead as Contributing Editors, the photographers were still technically freelancers and exempt from union membership, but we'd have our moment with management a few years later. By the late '90s, the internet was a thing full of potential and menace, though still of only marginal utility. (At the end of 1997, less than 20% of American households had internet; Canada was actually a trailblazer, with nearly thirty per cent.)

NOW's news section had published several articles adamantly condemning attempts by big publishers to pay their contributors a pittance for use of their material on websites. The paper's position was that website publication was a separate usage, and should pay reprint fees in line with those paid in print. But when the time came for NOW to launch its own website, the photographers were approached with a proposal that we get paid a fraction of the standard reprint rate - a figure I remember as less than twenty dollars.

The issue reached a head at a meeting where Michael and Alice laid their case out for the photographers, and Michael actually framed our taking this nominal fee as "an investment in the future of the paper." I replied that if this was an investment, it wasn't out of line to ask that we be given shares. (Ultimately we'd be paid nothing for website reprints.)

My relationship with management cooled considerably after that. At one point Irene mentioned during a phone call that I was being referred to around the newsroom as "the Fascist." A shock to me, I should add, who just a few years earlier had voted for Bob Rae's NDP government.

It was Michael's firm conviction - voiced firmly to me once at a party - that NOW should own its market, so we were tacitly forbidden to work for any free weekly competition. (At some point Michael entertained widening that edict to include the big dailies like the Star and the Globe & Mail, but relented.) I had always chafed against this - freelance work was tenuous, after all, and none of us had any guarantee of income - and at some point in the mid-'90s I began writing a column under a pseudonym about old jazz & blues records for NOW's main competitor, eye weekly.

(My pseudonym, if you're curious, was the name of the psychopath protagonist of Jim Thompson's hardboiled novel The Killer Inside Me.)

Many of my friends worked for eye. (I was best man at the wedding of Greg Boyd, the paper's entertainment and later news editor, and he would later return the favour at mine.) I'd played chicken with Michael's non-competition rule with the eye column, to be sure, but I'd helped push to end the "big head" and "no white background" edicts in the past, and imagined - mistakenly - that he'd see reason about this one day.

It was especially galling by the end of the '90s, when jobs from NOW were getting scarcer, and Irene warned us that there were going to be even fewer to come as layouts were maximizing ad space at the expense of our once luxurious photo spreads. The paper's travel budget for covers had been cut a few years previous. Looking at my ledger of assignments, the drop off was considerable: 1999 records just a dozen jobs from NOW all year, culminating in the Tobey Maguire swansong; at the beginning of that decade I was getting up to eight assignments a month.

Which is why I scratch my head when journalists and photographers complain about the destructive effect the internet has had on their business. My experience was that the industry was already shrinking with increasing speed long before the really disruptive effects of the digital revolution - first cheap broadband and then smartphones - had ever happened. The audience - and the ad dollars - that fueled the last golden age of publishing were clearly disappearing before Apple sold the first iMac, and with it the marginal market for my specialty - editorial portraiture.

I pushed things with NOW by taking a job from eye and letting them run my photo byline. It was noticed. Irene called me and, with obvious regret, told me I had a choice. With surprising regret, I told her that I was choosing eye, and with that my long tenure at NOW ended after a supremely productive decade.

I knew, when I hung up the phone, that a major part of my life had ended. What I couldn't know was how much more of it would end, as my circumstances - as both a freelance writer and photographer - would utterly change, while the foundations of the business I'd worked in since I'd left college shifted and buckled in the first clear signs of an industry's historic, slow-motion collapse.

As I write this, eye weekly is long gone (Michael got his wish there) and while NOW - barely, according to some reports - holds on, it's been many years since any of the photographers I shared a masthead with for a decade have had a byline in its pages.