THE MOST FRUSTRATING MOMENTS IN MY CAREER WEREN'T when I was looking for new clients, but when I couldn't get traction or recognition for work I knew was good. At the turn of the '90s live music photography was still a big part of what I did but, after climbing the steep technical learning curve, I realized that it was hard to do something original with concert shooting.

It was around this time that I ran into Kevin, who had been the guitarist in A Neon Rome, one of my favorite bands on the Queen West scene. He'd formed a new group, and told me I should come and check them out. I did, and at the end of the night I realized that I'd found the subject that would help me break my creative logjam with live music photography.


The band was called Pure - later re-named Love Bomber when another band of the same name, signed to a major label, got Kevin, Mike, Rob and Dave to give up the rights to the name for an undisclosed sum of money. They played what I can only describe as industrial metal, with drum loops and samples - handled by Dave from a keyboard - instead of a drummer.

What was really great about Pure/Love Bomber was how much work they put into their live shows. They had an unofficial fifth member who handled the lights, strobes and smoke machines that made every little club gig they did around town - I remember mostly seeing them at the Rivoli or Lee's Palace - look more like a stadium show. They also threw great shapes on stage - Kevin had always been good at this, right back to A Neon Rome - and I made an arrangement with them that I'd shoot as many of their gigs as I could. 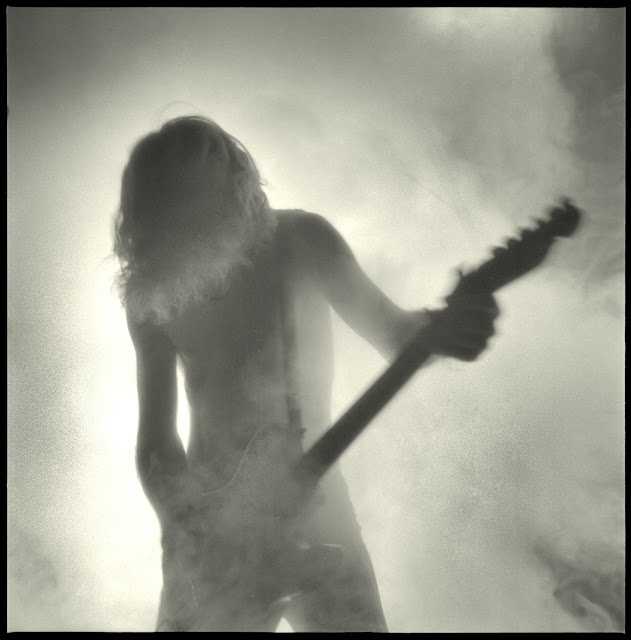 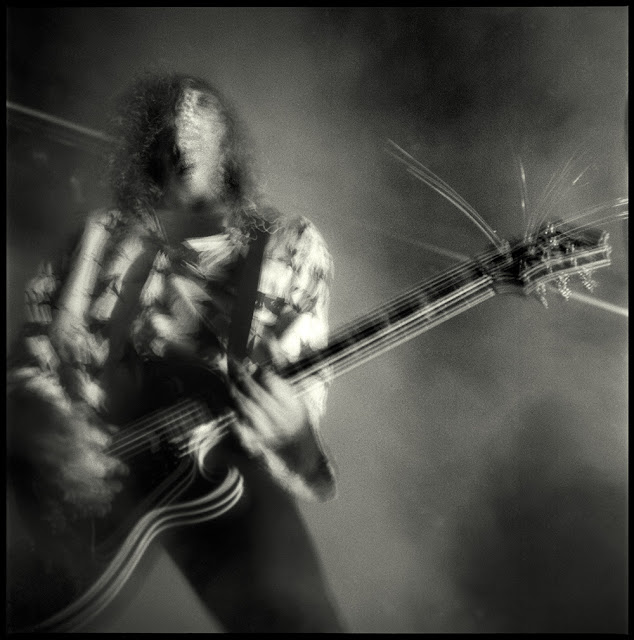 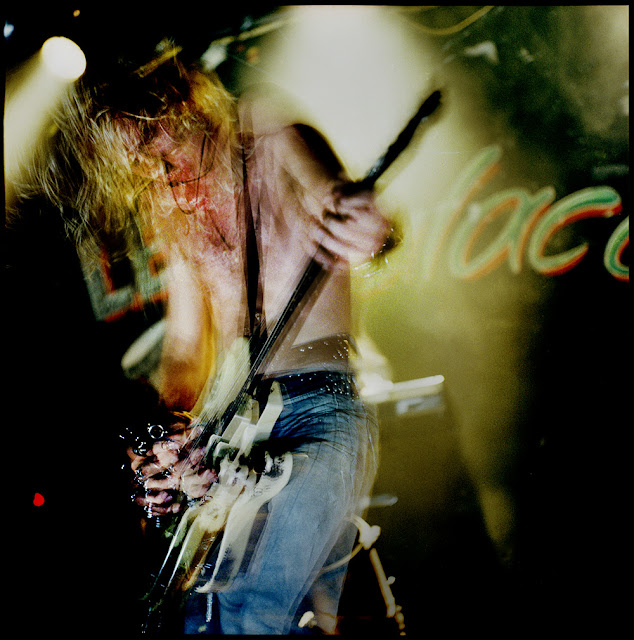 The biggest problem with shooting live music is that, as soon as you reached a certain level of competence, it was almost impossible to do anything with a unique style. Which is to say that, if another photographer was standing beside you taking photos at the same time, it was likely that your shots would look pretty much the same. My way out of this was to ignore the technical conventions of shooting live music - 35mm SLRs loaded with fast film, often pushed a stop or two, using long lenses and fast shutter speeds to capture action.

Instead, I shot nearly every Pure gig I went to using my Rolleiflex, a camera designed for portrait or street photography. I shot with unpushed film at slow shutter speeds, knowing that I'd be getting huge blurs. I had two big inspirations: One was Neal Preston's book of Led Zeppelin photos, published a few years earlier and full of the mystery, drama and menace I loved to see in rock photography. The other was Harper's Bazaar art director Alexey Brodovitch's rare but influential book of ballet photography from 1945, which was full of expressively blurred shots of dancers shot candidly. 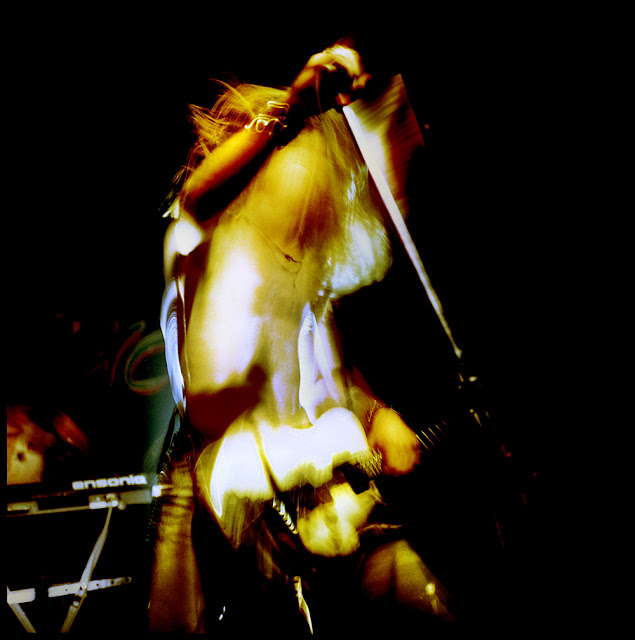 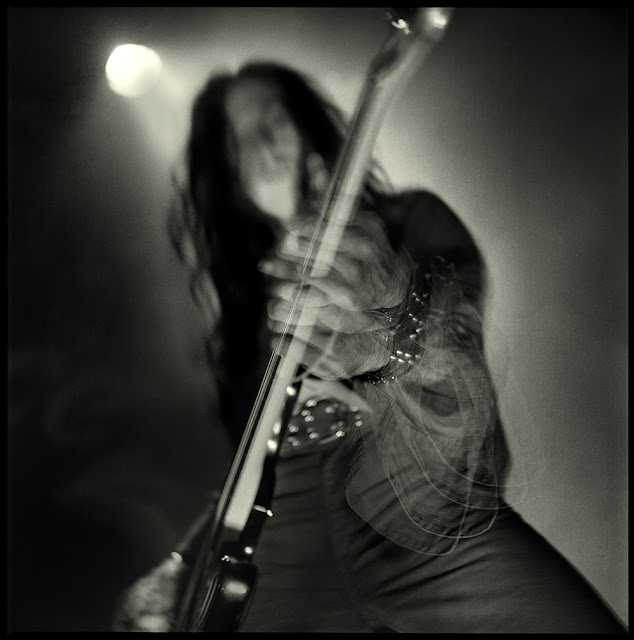 I photographed Pure/Love Bomber for nearly two years, refining the dramatic, expressionist look I got with my shots almost right from the start. Their smoke machines would helpfully fill in what were usually black voids around the performer while the strobes caught slivers of action in stuttering sequences, folded into the blurs. I even shot a few gigs with cross-processed colour film, breaking another rule for music photography that tried to reduce, not increase, contrast on film.

I was immensely pleased with the results of my work, and I think the band was, too. I made lots of prints and showed them around to everyone I could, to little or no interest. The band itself, who I thought should have been huge, struggled to get interest and, after some personnel changes when Kevin and Dave left, disappeared without a recorded trace. It was all very disappointing, and I resolved to pursue as little music photography - live or otherwise - as I could as the decade wore on.

Let me tell you a little secret about shooting music in Canada in the '80s and '90s. You could be relatively hip, and know who all the good bands are; you might even count them among your friends and neighbours. You might even get a big break early on, the sort of thing that might launch a young photographer's career in another country. Your reward for all this enthusiasm and creativity was that, one day, the industry would finally take notice and give you a big job.

They'd ask you to shoot Haywire.

At the end of 2001, I was invited to take part in a group show of concert photography at the Barry Whistler Gallery in Dallas, Texas. Of all the live shoots I'd done, I chose to send them two photos from the Pure/Love Bomber series I'd done a decade earlier - the final two shots from the ones above, printed very dark and moody and small and surrounded in the frame with an expanse of white matte. No one had heard of the band and, in any case, their faces were hidden or obscured in the shots. I could have sent photos of Prince or Bowie or Neil Young, but I wanted to make a statement that this was the best live music photography I'd done. Needless to say they didn't sell, and they hang in my office today. 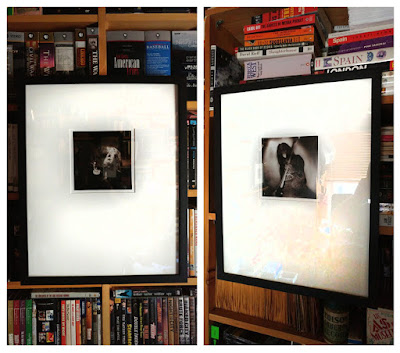 Those photos were the last entry I'd make in the Big Ledger, the record of prints made and sold I'd been keeping since the late '80s. Work had slowed down to a trickle by this point, and there didn't seem to be much point keeping track of what little I was getting any more. It seemed appropriate to stop with this gesture, underlining what I considered my best work and not the most commercial, and evidence - if it were needed - that I'm not a very good businessman.