YOU PROBABLY NEVER HEARD OF THE NILS. I think that's a shame, because for at least a couple of years, they were probably the best band in Canada. Which might sound like faint praise, but in the context of the best music being made on the fringe of the mainstream music industry at the time, they were probably as good as anything else that was happening - anyone from Husker Du to the Replacements to R.E.M. to the Meat Puppets. They were that good.

But you've probably never heard of the Nils because they were probably the unluckiest band to come out of Canada in the '80s, and that's saying something. I have had a guilty, lingering feeling hanging off my shoot with the Nils for almost thirty years, mostly because I saw them crash and burn so badly and wished desperately that something I could have written or done might have changed their luck. Which is why, even today, I feel sad looking at these pictures.

I first encountered the Nils early in my career at Nerve, when Dave handed me Sell Out Young, their first EP, and asked if I'd write about it. I frankly didn't expect much; habitual Canadian self-deprecation set my expectations low, and the record was on a Montreal label that I associated with the sort of painfully arch kitsch or noisy bullshit that Torontonians like myself presumed came almost exclusively out of Montreal.

But I took it home and put it on and ended up writing a rave review that verged on hysteria. If that was the only thing they ever released they'd have been a hall of fame act in this country, but it wasn't. The thing is, there was no way you were ever going to hear what they did next.


I shot the band the same year they brought out their eponymous debut record on Rock Hotel, a subsidiary of Profile Records. They remembered my review a year earlier and thanked me profusely; we had a good interview despite an awkward start, I took some portraits of the band sitting on the fire escape behind Lee's Palace, then came back later that night to watch them do an incredible set. I took a roll or two of live photos, which I've never printed until today.

And then it all went wrong. Halfway through their tour of North America Profile went bankrupt and their tour support money disappeared. After a depressing drive back to Montreal, they discovered that they were tied up in a four year contract with the defunct label that stopped them from releasing any new music. Don't ask me how something like this can happen - it's the music industry; the only business more exploitative and legally dubious was outlawed in America after a civil war.


Another band might have bounced back from this sort of blow, but the Nils had too many things going against them. They were from Canada, for one, and from a working class background that ensured there was no safety net or money for lawyers. Being anglophones in a francophone city probably didn't help either.

What it meant was four years of Joe jobs to pay off the debt they still owed a bankrupt label, few gigs, no touring, and no recording. The band effectively broke up when Carlos, the older brother of songwriter Alex Soria, took what money they had left and headed west. Alex formed Chino - basically the Nils Mk. II - and when their contract finally expired, put out a compilation of the early Nils EPs with unreleased and rare tracks.

Alex began playing with a reformed Nils early in the new millennium, but a lot of time had passed and obscurity is a close cousin to entropy, and nearly as hard to overcome. In early December of 2004 he walked in front of a train near his Montreal home. He was 38. For a small group of friends and fans, the news was devastating. 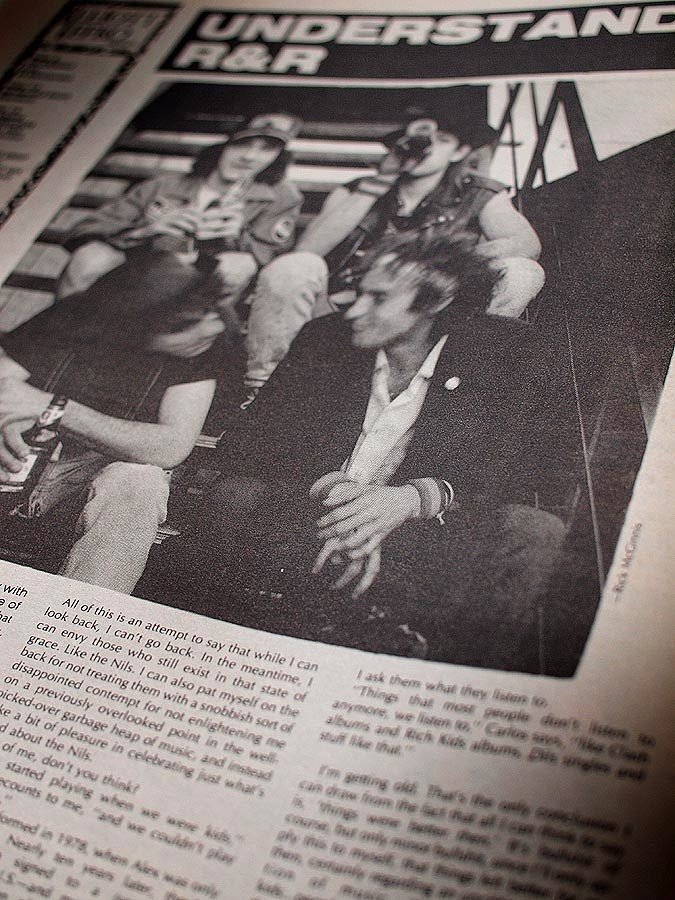 He might have despaired, but based on the Chino record and the two compilations that have ultimately filled in the Nils story, he never lost his ability to write great songs. At any point in their forced retirement and the long struggle back they could have put out records as fantastic as that first EP I loved so much. If they'd been a different band in a different place.

Apart from my rave review of Sell Out Young and the more than slightly self-indulgent interview with the band that ran in Nerve, I'd never write about the Nils again. They were just one of a half dozen Canadian bands that I ardently hoped would make it, and when it was obvious that - for a couple reasons that might have been their fault and a whole lot more that weren't - they never would, I guiltily looked away.

The Nils are touring and recording again with Carlos Soria leading the group, and I hope they can at least manage the sort of anxious and humble but steady living that a cult band traveling the post-major-label landscape can aspire to these days. But I know that they - and Alex Soria especially - deserved a whole lot better. If you don't believe me, just buy the records at the bottom of this post. And tell me you wouldn't prefer just one Nils to a dozen Brian Adams. Because Canada could have been a whole lot cooler.