THE REIGNING MUSICAL MOMENT WHEN I STARTED WORKING FOR NERVE magazine was still dominated by American hardcore punk. Whatever I ended up shooting and writing about for Dave and Nancy in the years that followed, my first months at the paper were spent in the dingy dives where punk shows got booked, dodging flailing legs and arms as bodies rolled onto the scarred stages where I was crouching.

The faster, louder, "bees in a bottle" sound of early hardcore was, by 1986, giving way to a more metallic sound, led by bands like Corrosion of Conformity from Raleigh, NC. I'd been passed a copy of Animosity, their new mini-LP, and I'd loved it, so I asked Dave if I could write about the band as they passed through town.

The band were a revolving door, constantly swapping out members, with the only constant being guitarist Woody Weatherman; bassist Mike Dean had been the singer on Animosity, but by the time they played Ildiko's, a worn-out former Hungarian banquet hall on Bloor Street's student strip that would soon become a pool hall, Simon Bob Sinister had joined the band for a brief run as vocalist.

Perhaps this is why the band had such little camaraderie when I walked them a couple of blocks north of the club to the park next to St. Alban's Anglican church - a spot I'd scouted a few weeks previous and was dying to use as a backdrop. Mike Dean certainly didn't bother trying to look like he wanted to be there, but even at the time I thought that this glaring tension actually made for a better photo than just another shot of a band trying to look moody or antic.


The only technical note I have is that this is one of the few times I used Ilford's XP film - a black and white stock that was developed in C-41 colour chemistry. (They still make a variation on it today.) It made for a nearly grainless negative, but the expense of paying for it to be developed in a lab and its unusual contrast curve in the darkroom meant that it was an experiment I wouldn't try again.

I shot one roll of XP1 that contained the band portrait and the two live shots above. I was obviously keen on the "flash and burn" effect, and was desperate to capture the chaotic energy of a hardcore show. Maybe I was just a little bit successful. 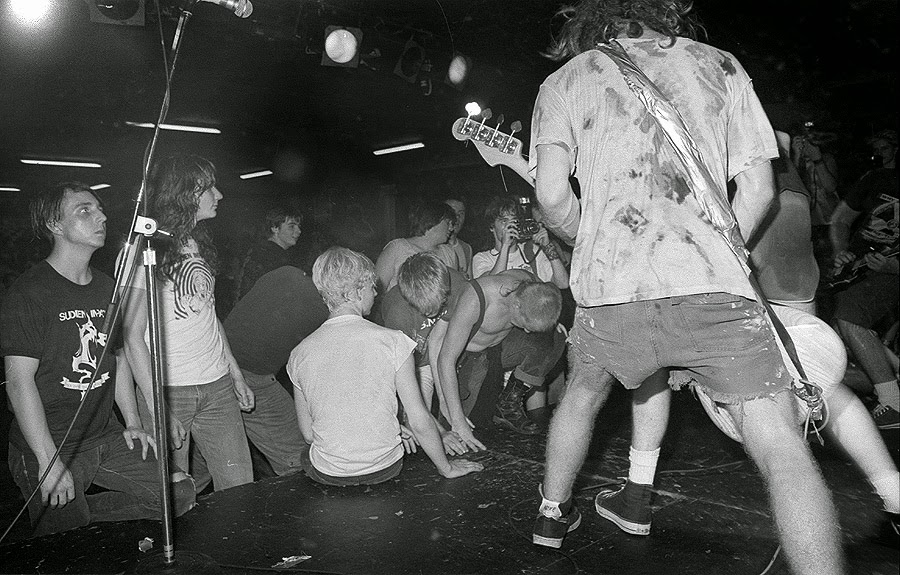 When that roll was finished I switched over to a roll of regular black and white film, and filled most of that one with shots taken behind the band, aimed at the crowd, who were always as much - if not more - a part of any hardcore gig. As ever, with old shots like this, I can't help but wonder what happened to these young men. At least I can account for one of them.

As I was examining the second last shot in this post, I noticed the young man in the crowd holding a camera. Knowing he was at this show, I sent it off to my friend Rod Orchard, my onetime assistant and the photographer at my wedding; he confirmed that it was him, a bunch of years before we'd meet. Hopefully one day he'll find a shot in his archives looking the other way, catching me hunched at the side of the stage at Ildiko's.