I'M BAD AT THROWING THINGS OUT, especially if they have a sliver of usefulness left in them. Cameras are among the most useful things in the world to me, so it's no surprise that, more than two decades after I stopped using them, I still have a Pentax Spotmatic.


Just after I dropped out of college I was given a small nest egg by my mother - my Baby Bonus, saved up for years with interest at the Our Lady of Victory Credit Union. An act of charity, I'm sure - I was out in the world without a degree but with a vague ambition to become a journalist, something no one in our family had ever been. I promptly bought an electric guitar - my priorities were sound, as you can tell - but there was still some money left over, so for reasons still obscure to me today I headed downtown to the camera stores near Pawn Shop Row on Church Street and purchased a 35mm camera.

We were a Kodak family. The Kodak Canada plant was just a few blocks from our house, and my mother worked there from the '20s till the late '40s. My sister had a job in the plant as a teenager, and my cousin Terry spent her whole working career at Kodak, retiring in the '90s, a few years before the plant closed. I'd been given Instamatics as gifts when I was a kid but I'd never been bitten by the photography bug, so I can't really tell you what made me think that I needed a camera. Nonetheless, here's a frame from the first roll I ever shot with my first Pentax Spotmatic - the view from the window of our living room out onto the corner of Gray and Outlook:


A pretty terrible shot, but at least I'd developed it myself, in the basement kitchen. This isn't the first shot on the roll, however; that was actually a series of candid photos of my co-workers at Simpson's Toy Town, where I was head stock boy, so I probably bought the camera on my lunch break, loaded in a roll of Tri-X and started snapping, eager to see if the damned thing actually worked. This photo was probably taken the next morning, after I woke up and took another look at my new purchase and decided to finish the roll. There are no leaves on either the trees or the ground, so we're looking at a sunless spring morning in 1985. I don't want to sound too grand, but my life basically started here.

The Spotmatic was an obvious choice for a novice photographer, which is probably how the salesman at Henry's sold it to me - it was simple and cheap, with plenty of inexpensive used lenses made by Pentax or a half-dozen brands like Vivitar, Tamron and Soligor. Once the camera of choice for students, it had been supplanted by the Pentax K1000, which replaced the Spotmatic's screwmount lenses with bayonet mounts. If you watch old footage of the Beatles on their first tour of America, they're all carrying Spotmatics. 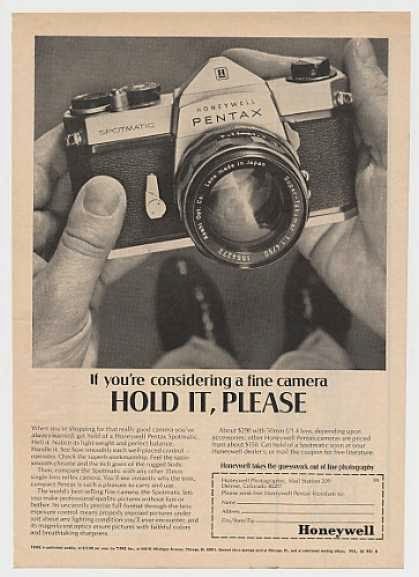 As my friend Jonathan Castellino pointed out to me recently, it was hardly a fine camera; almost Soviet in construction, it was rough and inelegant, with a crude in-camera meter. It didn't take motor drives, and changing the screwmount lenses was time-consuming and clumsy. My first Spotmatic had a nasty metal burr on the film advance lever that left a red mark on my thumb until I took a bit of sandpaper to it. It was all I could afford, however, and I quickly started buying lenses, then an extra body, as I'd noticed other photographers carrying around two or three, loaded with different film and lenses. The Spotmatic was my camera for the first four years of my career.

Sharp eyes will notice that the camera I still own today isn't a Spotmatic, but a Pentax SV - the immediate predecessor to the Spotmatic, launched the year I was born. It's purely mechanical, with no internal meter and no battery, which probably explains why my camera has this piece of surgical tape on the back, with a helpful list of f-stops for different lighting conditions: 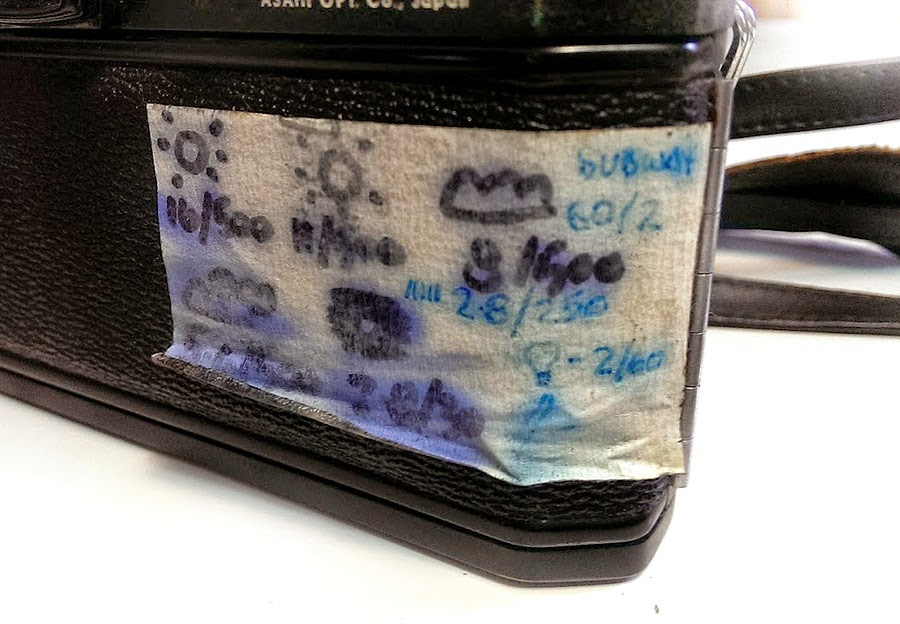 This was the last Pentax I bought; black Spotmatics were rare, which was probably what caught my eye and extracted whatever money was burning a hole in my pocket that day. I liked the idea that it didn't have a meter, requiring me to trust my eye and my intuition - though obviously not so much that I didn't need the cheat sheet. I'd switched to Canon autofocus cameras by 1992 and sold off my Spotmatics and their lenses not long after, but I kept the SV, which I last used on a Christmas trip to visit a friend in London in 1997.

I can't tell you how grateful I am to this simple little camera, and it's appropriate that one of the first images I took with it was the view from the front window of my parents' house. There was a whole world out there, outside Mount Dennis, and I was desperate to see if I could find a place in it. That blurry, grainy photo reminds me of how eager I was to get started, and it was a cheap used camera that would pull me along.
Posted by rick mcginnis at 7:30 AM