WE WATCHED A DOCUMENTARY OVER THE HOLIDAYS ABOUT "FAIRYTALE OF NEW YORK," the Pogues' 1987 Christmas hit, and I was reminded of my very brief, very unsuccessful shoot with Shane McGowan back at the beginning of my career. Besides lodging the song in my head for a week, it got me thinking about all the misfires and duds I've had over the years, a few of them rooted permanently in my memory.

I had been assigned to work with fellow Nerve writer Howard Druckman on a Pogues feature, and we'd had a fairly successful interview with Spider Stacy and James Fearnley from the band. But I knew the story needed a portrait of McGowan, who was conspicuously absent backstage before the show. I asked if a quick shoot could be arranged, and was taken out to the band's tour bus in the parking lot.

A minder - one of those tough but professional road crew who've seen it all - opened the door and told me to wait outside. After a few minutes he emerged with McGowan, who looked about as dazed and confused as a human being could be while standing up and drawing breath, his eyes barely holding focus on me or anything in his vicinity. He was maneuvered into a spot just a few feet from the bus and gave a few dutiful smiles that showcased a set of teeth that gave me the horrors.

I shot just over a half dozen frames, two of which featured Shane obeying the sole instruction I gave him: "Look up with your eyes." After clicking the shot above, McGowan put his sunglasses back on and was steered back into the bus by his minder. I'm guessing I'd had more rewarding portrait sessions around this time, since despite this wholly random encounter, I still decided to pursue photography as a career. 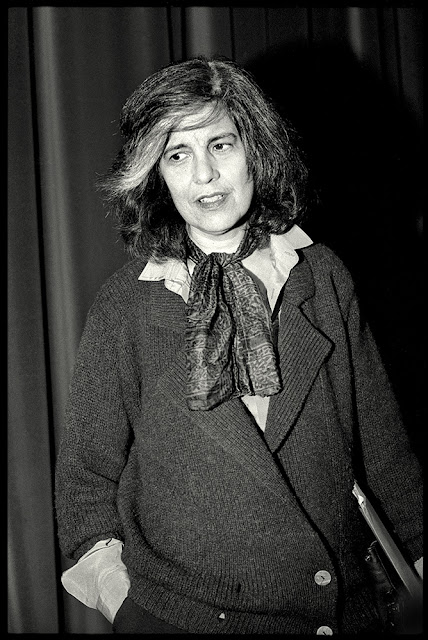 Writer Susan Sontag was a major literary figure when my new girlfriend told me that we had to go see her give a lecture at Ryerson Polytechnic. Eager to take advantage of any opportunity to get a photo of someone famous, I brought my camera along and, when we somehow ended up backstage after the talk, asked Sontag if I could quickly take her photo. I don't know why she agreed, but I've since learned that she liked having her picture taken for some reason, perhaps connected with being the author of On Photography.

I will admit to not remembering anything about her lecture. It was delivered with heavy reliance on the jargon of post-structuralist theory, very fashionable at the time and much favoured by my girlfriend and her circle in film studies at the university. I knitted my brow through most of it, and only got a bit of relief afterwards when I ran into my old college theatre buddy Colin Taylor, also there on a date.

"I haven't a clue what the fuck that was all about," he laughed in his big, stage-trained baritone.

I took about half a dozen frames of Sontag just by the proscenium curtain, my flash held at arm's length on one side while I focused and hit the shutter with the other hand. They looked nothing like the really interesting portraits I'd seen of Sontag so I promptly forgot about them, sandwiched on a single roll of film with live photos of The Stranglers and The Nils, a Montreal punk band I loved.

Today, they seem serviceable - the sort of thing Fred McDarrah of the Village Voice might have offhandedly shot on a busy Friday night covering Manhattan cultural events. I'd care about them more if I still held Sontag in high regard, but since her death over a decade ago, her reputation has receded remarkably without the writer or her supporters to keep it tended. 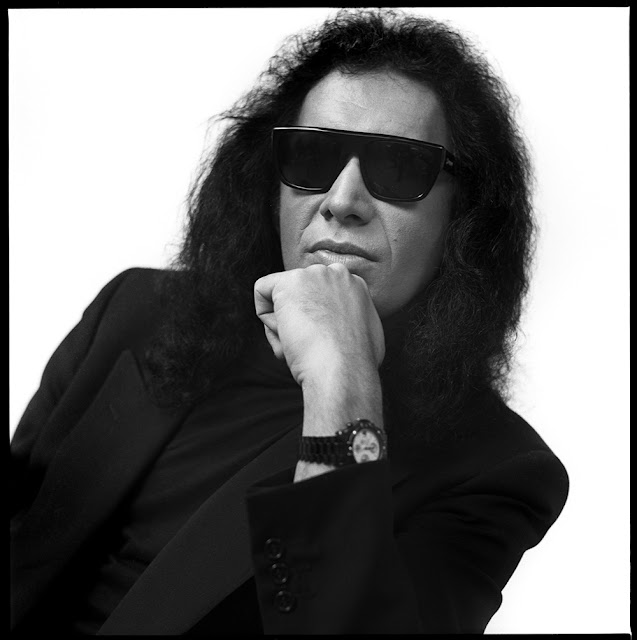 I've had a couple of encounters with KISS bassist Gene Simmons in my career, the first on assignment for Graffiti when I had a regular gig shooting in-house ads featuring celebrities and bands holding copies of the mag. While his band's '70s legacy was cherished by most of my musician friends, KISS itself was considered a joke by the last half of the '80s, despite Simmons' tireless efforts at promotion and merchandising.

He showed up at the magazine's offices very heavily made up, and insisted on posing for most of the shots with a prop - a moneybag that was the logo of his new (and never very successful) record label, Simmons Records. When I was able to get a portrait without magazine or props, he gave what I would have to assume was a blank stare from behind his visorlike shades. Gene only came to life when I took candids of him with most of the female staff at the magazine - including the receptionist, with whom he already seemed to be on more than speaking terms.

I'll admit that we didn't hit it off from the start; Simmons' conservative political views were considered an eccentricity of his - it would be a few more years before they'd provoke outrage. (From the perspective of today, the '80s now seem like a much more politically tolerant time, though they hardly seemed so then.) I probably went out of my way to provoke him, scoffing at his enthusiasm for Armand Hammer, who I thought a pretty weak capitalist icon.

"I bet you call yourself a socialist," he shot back at me. I said I did - I was capable of saying stupid things like that all the time back then, in the absence of anything like a real political education. (My positions have changed considerably, to be sure, but I still think Armand Hammer was a bit of a fraud.) A disaster of a shoot, though worth it for the anecdotes for years afterward. 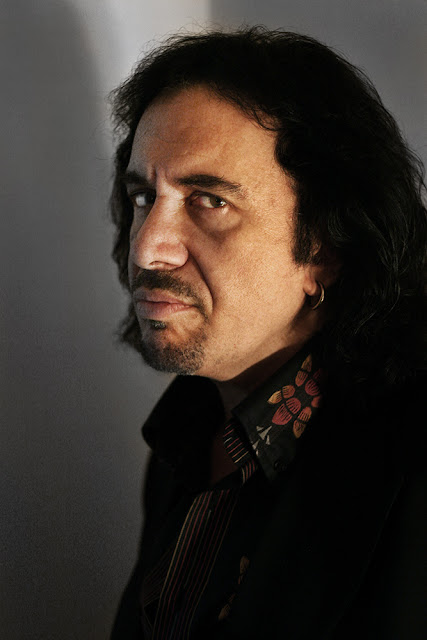 I'd meet Gene again over fifteen years later, after Simmons had successfully kept his band in the public eye long enough for KISS to become actually venerable. Gene had also cultivated his own celebrity well, appearing on film and television frequently, though the apex of his efforts were still in the future with his appearances on Donald Trump's Celebrity Apprentice and his own reality TV show, Simmons Family Jewels.

I watched Simmons bait the reporter from the free national daily with his political views, and got a glimpse of how I must have looked years earlier. While they bickered over George W. Bush and his foreign policy, I hopelessly looked for a spot of light in the windowless room, finally dragging a couple of floor lamps over to a corner of the room and taking the shade off one of them.

Once again in front of my camera, Gene gave me an updated version of his media face, which had shifted from haughty indifference to cartoon menace. I was trying to think of a way to provoke him to do something different when he suddenly rolled his eyes back in his head and mugged ferociously. With a shudder I realized that this was probably the most I was going to get from the man, and quickly shot and reframed his face as often as I could until he looked bored again and signaled that we were done.

A further fourteen years on, I think I've managed to salvage one shot by giving it the full black-and-white horror movie still treatment - one which I think Gene might actually approve, though I could never have handed this in to the newspaper. I've never really seen a truly great portrait of Gene Simmons, though my friend Chris tried manfully to force him out of his posing and mugging. I'd like a re-match with Gene one day; perhaps the third time will be a charm. 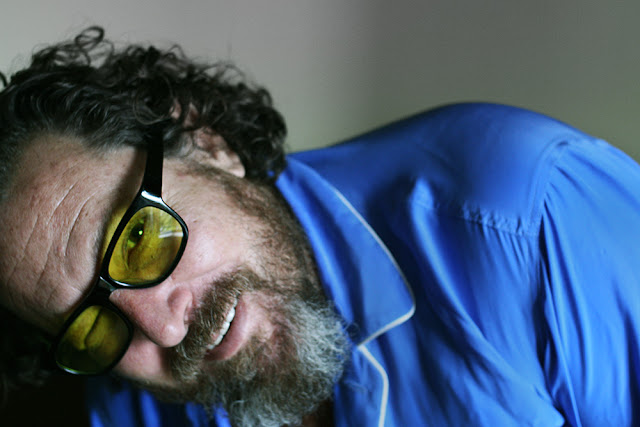 The last really disastrous portrait shoot I remember was with artist and director Julian Schnabel, in a room at the Hotel Intercontinental on Bloor West while working the film festival for the free national daily. Schnabel, who had a critical hit on his hands and was probably feeling pretty cocky, showed up wearing a pyjama top. These photos give some idea of how dim those hotel rooms were, and how hard it was to find a halfway decent spot of light for these very, very brief shoots.

The room had been stripped of all of its furniture except for the headboards of the beds, which were (in the fashion of modern hotels) mounted to the walls. As I moved the camera up to my eye, Schnabel gave a sidelong glance and a smirk to his retinue and began bobbing and weaving in front of me while I tried to keep him in frame. The camera's autofocus struggled to lock onto him, so almost every photo from this shoot except the one at the bottom was a blur.

I'm sure he thought he was being funny, but I felt like I was being disrespected. I had a simple job, summed up with providing a selection of usable and sharp portraits for my employers, and Schnabel decided to either exorcise his boredom or entertain his entourage with a petulant little performance. I was at what felt like the nadir of my career as a photographer at the time, and this reminded me of how all those years learning how to control a shoot and interact with subjects had been somehow lost.

Thirty years of progress and hard work had reversed back to being at the mercy of a subject's whims, without any tactic or strategy of my own to funnel the situation into a decent portrait - a real low point.