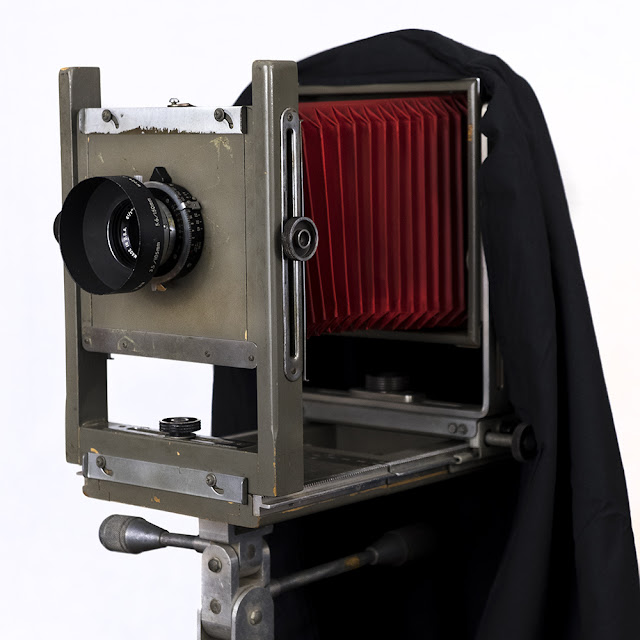 IT WAS PROBABLY THE RED LEATHER BELLOWS THAT GOT ME. I wasn't in the market for a view camera at the turn of the '90s, but the Burke & James with the gray painted wood, probably built before I was born, was hard to miss among the used equipment at the back of the camera store on Queen Street East. It was an impulse purchase, but the focusing screen was cracked and it was cheap - and it had that fantastic red bellows.

As I said in an earlier post, film technology was in its mature stage when I started my career, so you could use gear built decades earlier. View cameras were really the first cameras, mostly unchanged for a century. In the decade after Richard Avedon used a Deardorff to shoot his American West series, they were being returned to use by portrait shooters after decades as the landscape photographer's camera of choice.


I didn't go to school for photography, so I guess I was drawn to the challenge of learning to use a whole new type of camera. I was also a budding Luddite, intent on going into full reverse through the decades for inspiration, so it was probably inevitable that I'd be drawn to this horse and carriage of a camera.

My first shoot with the Burke & James saw me make a classic rookie mistake, failing to compensate for the image circle on my Ilex 165mm/6.3 lens when I'd tilted the lens plane to get the focus shift with my portrait of composer James Tenney. I didn't see the ring of light drop off on the focusing glass at the back of the camera, and wouldn't until the film came back from the developer. A dumb mistake, to be sure, but I didn't really mind it that much then, and have come to like it even more now.

I'd finally figured out lens coverage and tilt shift by the time I shot local band Lowest of the Low in my new, dedicated studio space after my last roommate moved out. Effects like this were precisely why I'd bought the Burke & James, and why I persevered with the technical challenges of shooting with a view camera, prime among which was the mathematical formula required to figure out exposure compensation with the long bellows draw - the distance light had to travel from the lens to the film plane when you shot focused at anything less than infinity. The view camera forced you to work slowly and methodically, taking just a few exposures and planning out compositions carefully beforehand. 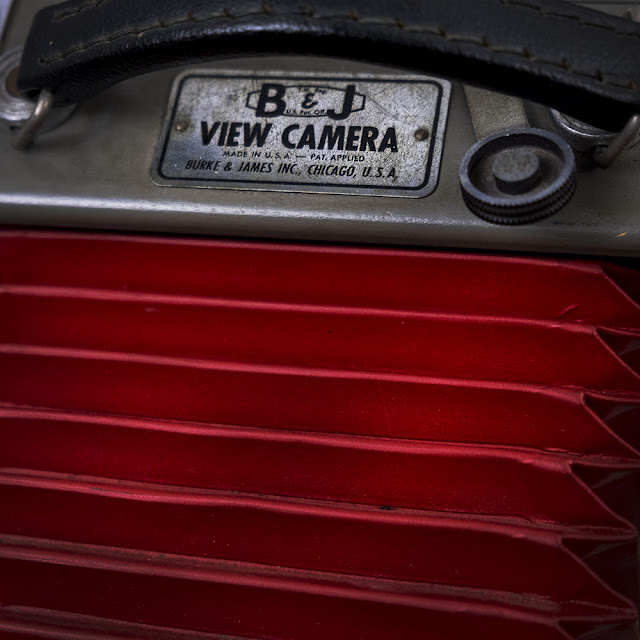 Which is why it was such a great camera for still life work. It got used most of all when I shot my fruit and veg series throughout the decade, and this shot of a bundle of leeks was probably the first (and only) photo I ever sold off the wall at a solo photo show - to the chef/owner of the restaurant that hosted the show.

The apple still life was also in that show, and remains a personal favorite. When I saw this bright green Granny Smith glowing and blurred on the ground glass of the camera I froze; racking back and forth, it always looked better out of focus than sharp, an echo - in my mind at least - of the Apple Records LP labels I remembered in my older siblings' record collections. I still have that framed 30" x 40" inch framed print today, hanging in our living room.


I never used the Burke & James as much as I would have liked. It never left the studio, and only got used for portrait work on those rare occasions when I had the luxury of time and pre-planning. The ultimate workout for the camera - and test of my technical ability - came when I was assigned to shoot the drummer and conga player of a local band for the cover of one of NOW's music supplements.

I sketched the shot out ahead of time and, while I did use my Bronica to shoot back-ups in case it didn't work out, the real work was done with the Burke & James. The final shot threw in everything - corrected and uncorrected strobe and tungsten light, flash and burn, tilt shift focus and even diffusion, helpfully provided by stage smoke that came in aerosol cans. The only unplanned part of the shot was the detail that really makes it - the oval corona of lens flare that radiates out from the cymbal like a sound wave. I didn't see that until the film came back from the lab.


I don't think I'd looked inside the camera's case for at least a decade, until I opened it last weekend to shoot it for this post. Everything was just as I left it, including a half-finished box of Polaroids, the film holders, a tape measure for measuring bellows draw, my notebook for exposure calculation and the dark cloth I had sewn up by the tailor across the street from my studio - the same one who made my bespoke trousers.

It's unlikely I'll get rid of the Burke & James - I'm too sentimental - but of all my old cameras, this is the one that still feels like it holds some untapped potential. You can still buy sheet film, and while a digital back would easily slip into the film stage of a view camera, the technical challenges and sheer expense of manufacturing such a thing means that it's unlikely that anyone will ever offer one for sale.

And while you can roughly approximate tilt shift focus in Photoshop, the Burke & James still offers unique creative possibilities impossible with any other digital camera. I can imagine struggling to load those film backs again one day. I might even get the cracked focusing screen fixed. 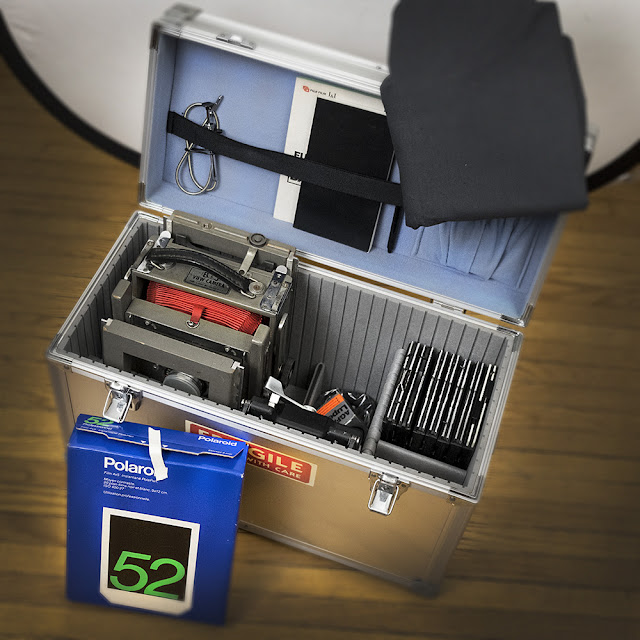