IF YOU ASK MOST PEOPLE, THEY'LL PROBABLY TELL YOU THAT THEY LISTEN TO MUSIC TO FEEL GOOD. Most of those people might be telling the truth, but the rest are lying. In my experience, we listen to music to feel - not just for elation, but for an expression of our strongest feelings, and it's likely that there are long stretches of our lives where we've felt pretty bad.

I listened to Mark Eitzel and his band, American Music Club, an awful lot when I felt pretty bad. About my life, about myself, about my general prospects at a time in my life when it would have served me better to have had access to some conduit to optimism. I don't really regret it; the music Eitzel and AMC made over at least three records helped me explain - at least for myself, in my dark nights of the soul - the desperate emotions that often overwhelmed me in the aftermath of the first major romantic disappointment of my adult life. (And thankfully the only one.)


The band were touring their Mercury record and I was assigned to do some live shots by NOW magazine when they were in town. Being a fan, I showed up at soundcheck and talked them into a brief portrait session in the alleyway behind the club. If I had any ambitions toward having the band act out the enormous emotional service they were performing for me at the time, it certainly doesn't show in these photos.

It would have been absurd to even ask. Mark Eitzel might have had his roots in punk rock, but AMC were a musically sophisticated group across all their lineups, up to the demands of Eitzel's melodramatic and often orchestral songs. I was a particular fan of guitarist Vudi and pedal steel player Bruce Kaphan, but I'm a big guitar geek. The second frame would be a merely serviceable promo handout; the one at the top is a more accurate snapshot of a band going about the wholly joyless ritual of having their photo taken by some local fanboy photog. 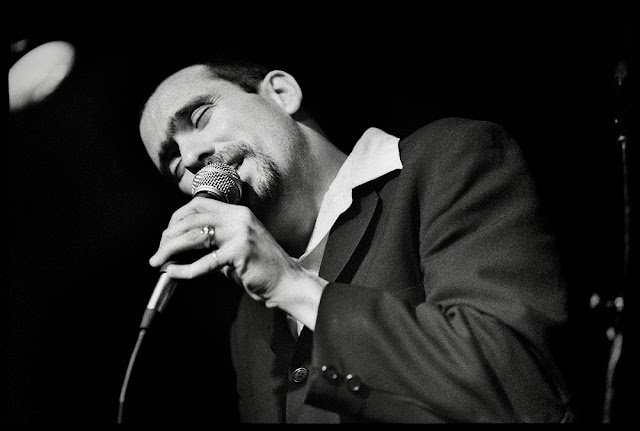 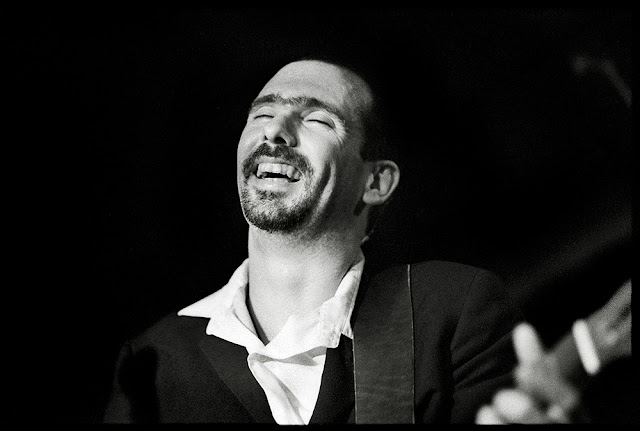 Mark Eitzel is a riveting live performer, recklessly throwing himself into his songs, a "real showman," as he mockingly put the words into another singer's mouth in one of my favorite AMC songs, "Johnny Mathis' Feet." Most of my photos of the band playing that night are of him, and I could have scanned a lot more, not because they're so great, but because at least a hint of Eitzel's electric abandon is captured in them.

I still listen to Eitzel and AMC, but (thankfully) not with the same hungry need to hear someone reflect my emotional state back at me, lending some nobility to my despair. Thankfully I don't feel nearly so desperate any more - despair is a sin, as we Catholics say - and the characters in Eitzel's songs can be appreciated from more of a distance, like characters in a short story. Sometimes I miss having that heartfelt, urgent reaction to music, but I don't miss the lonely, angry person I was when I took these photos.