PERHAPS IT'S BECAUSE THEY DO THEIR REAL JOB ALONE, WITHOUT AN AUDIENCE, writers were among the easiest people to shoot - at least in my experience. Actors expect the lens and, maybe even just unconsciously, withhold that extra bit they only give at work. Writers on the other hand always presented themselves in front of my camera eagerly, as if they'd been waiting forever for someone to ask them to perform.

I had this thought when I dug out these portraits of British novelist Fay Weldon, taken at the same busy 1990 author's festival where I photographed D.M. Thomas, Richard Ford, Marianne Wiggins, Carolyn Cassady, Elmore Leonard and George V. Higgins. I had two contact sheets of shots, one colour and one black and white, and no shortage of decent frames from which to choose. Weldon didn't get out of her chair, but she responded to my simple directions - look to the side, look up, bring up your hand, look up at me with just your eyes - as if she were in close up for a pivotal scene in a movie. 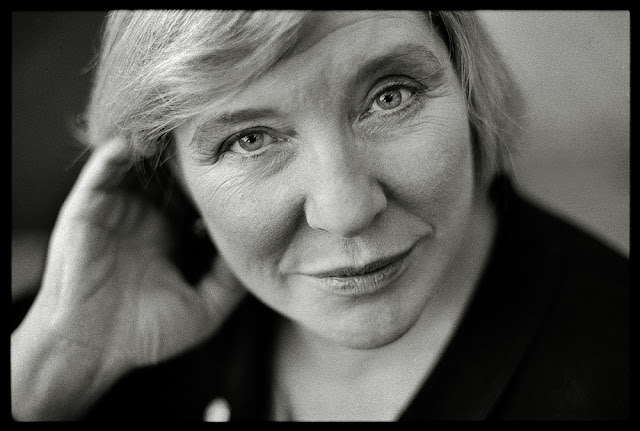 I shot a super fast Agfa colour negative film that was easy to work with in low light conditions and printed with plenty of tight, pleasing pointillist grain. It would have been my film of choice except that it was always hard to get and in any case soon discontinued. I didn't bother with the usual NOW cover format, composing her tightly into one side of the frame with headspace for the magazine logo, so the big question is why, particularly, I bothered shooting colour portraits of Weldon when she wasn't meant for NOW's cover.

Maybe I was being ambitious. The Hollywood movie version of her breakthrough novel, The Life and Loves of a She Devil, had been released the previous year and Weldon's profile was a high as it would ever be. Maybe I was hoping for a portfolio piece, or a future sale to another magazine. I covered all the bases in any case, with colour and black and white and plenty of vertical and horizontal shots to suit any future client.

Back then you shot verticals - portrait mode as our phones call it now - if you were aiming for a cover or a full page. Today, if I knew I was shooting for the internet, I'd only shoot horizontals - landscape mode in cellphone parlance - to fit into the average browser window layout. Most art directors in the heyday of print cropped square format photos to fit the layout, much to my annoyance as a Rolleiflex loyalist; today, finally, Instagram has fostered popular appreciation for the magic of the square.


Weldon is considered a leading light of second wave feminist writers, and has a fine, brusque prose style that serves her stories without being merely utilitarian. In preparation for this post I read her autobiography, which is full of arresting anecdotes and observations. Writing about the portrait that she and her sister sat for with an eminent artist - the painting hangs in New Zealand's National Gallery - Weldon recalls being a fidgety subject and her ultimate disappointment with the result:


She was very nice, though we didn't think we looked at all the way she had painted us. We were more real and lasting on canvas than we were in real life. But we were very polite. We knew instinctively from an early age that the artist's sensibilities are to be protected, lest they give up altogether and walk off into the night.

A lifelong renegade, Weldon has attracted controversy, especially recently as age has amplified her tendency to speak plainly with a growing disregard for dogma and conventional wisdom. I like to think I captured at least a hint of this forthrightness in these portraits of a quietly defiant writer who met my camera more than halfway.