UNTIL LAST WEEKEND, I ADAMANTLY MAINTAINED THAT I HAD NEVER SEEN PRINCE LIVE. I did the same thing with David Bowie, until I began rooting around my files and found proof that my memory is the least reliable thing about me. It would have been nice if I'd remembered these shots earlier this year, but here they are nonetheless.


It's the Act I Tour, early spring, Maple Leaf Gardens, on assignment for NOW magazine. The most elaborate Little Richard marcel wave, the microphone pistol, the hat with the veil of chains. He was between the "Love Symbol" album and Come, and just at the beginning of his long dispute with Warner Bros., his record company.

It's two years after "Diamonds and Pearls" and "Cream," a year after "Sexy MF" and "My Name is Prince," and two years before "The Most Beautiful Girl in the World." He's hardly a spent force - Prince's wilderness years are yet to start in earnest - so why did I completely forget that I saw this show? 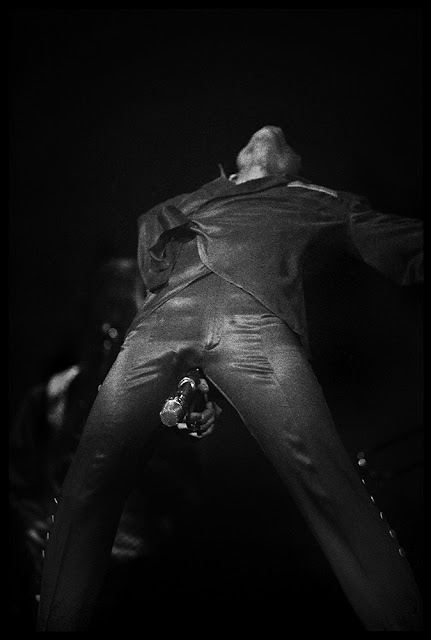 The one thing that I do know is that I have just half a roll of photos of this show - eighteen frames, which means that photographers were likely given a single song to shoot, probably less. With a motor drive on my camera I should have been able to rattle off at least a roll if I'd had enough time, even with a lens change. It's a testament to Prince, though, that so many of them aren't bad (for concert photos.) I shot more than this at a Miles Davis show and got nothing. Prince was definitely a value-for-your-money performer.

Once again, I can only assume that the briefness of the shoot, the fact that it was just a job, sandwiched between a whole bunch of other jobs (the early to mid-'90s were probably my busiest time as a professional) and my own sullenness contributed to the core dump of this particular memory. A with Bowie, I thought I was seeing him too late - a whole decade since the Dirty Mind, 1999 and Purple Rain tours, after all - so I discarded the memory altogether.