I AM JUST OVER FIFTY YEARS OLD, AND NONE OF MY PORTRAITS were made more than three decades ago, but going through my files I can't help but regard some of these old photos as artifacts from a vanished world. These portraits of the English poet and novelist D.M. Thomas are only about as old as Nirvana's first album, but this is the world pre-internet, and sometimes it might as well be a hundred years ago

I was an English major in college before I was a photographer, so I can recall a time when authors were celebrities and books - real books, written for adults - were major cultural events. Any newspaper had a book section fully staffed with editors, and a celebrity-studded event like the Toronto film festival had its stature enhanced when a big name writer like Norman Mailer would make an appearance.

When I was a college lit major there was a heated and ongoing debate about what contemporary books might have been potential candidates to the canon of fiction we were meant to have read in or outside our reading for classes - big names like Chaucer, Shakespeare, Milton, Dickens, Twain, Tolstoy, Flaubert, Austen, Ibsen, Joyce and Kafka. Candidates were proposed and debated and every season's crop of well-reviewed novels would be scrutinized for the qualities that might put them on some future syllabus and, it was presumed, bestow literary immortality.


D. M. Thomas published The White Hotel around when I was sending out college applications, and by the time I started attending classes it was all over the book review pages and literary supplements, and remained prominently displayed on bookstore shelves for the rest of that decade, a controversial but undeniably "serious" book that drew so deeply from the modernist tradition that it was presumed as likely a candidate for some future canon as anything else published at the time. Hell, even People magazine wrote about him. 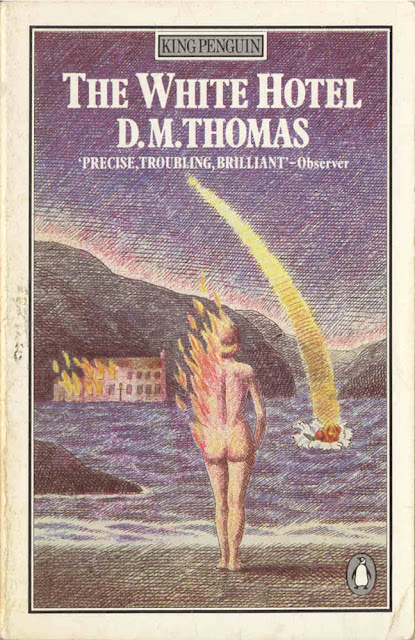 Nearly ten years later I was a young photographer and found myself assigned to take Thomas' portrait when he came through town (likely for the author's festival) to publicize his latest book, a novel about writers in which he appeared as a character, which felt very postmodern, at least inasmuch as we understood the term. I've said before that assignments like this felt like a very big deal for me - as momentous as shooting a movie star or a politician for someone who loved books and, for at least a while, dreamed of being a novelist.


I expected someone a bit more forbidding - as serious and intimidating as you'd expect from the author of a book about Freud, opera and the Holocaust - but Thomas was remarkably wry and self-mocking, making jokes about doing an "author face" while we shot and bantering with the publicists on the sidelines.

I read his memoirs years later and learned that he was working class, from Cornwall, and the lucky recipient of an Oxford scholarship, so perhaps he was simply compensating for that displaced feeling shared by class trespassers, trying to overcome that nagging sense of "imposter syndrome." In hindsight, he was probably still a bit astounded by the lightning strike success of a very unlikely novel, and couldn't hide how bemused he was by it all, even a decade later.

I doubt that Thomas was destined for a cover story, but I took a roll of cross-processed colour in any case, feeling that the subject deserved the extra outlay of cash and time. I don't think these photos have been seen since they were published over twenty-five years ago, and in any case that world of book sections, celebrity authors, writer's festivals and serious fiction as a cultural event has receded even more rapidly into the past.

What hasn't apparently ended are the attempts to make The White Hotel into a movie. Thomas himself has told this ongoing story with immense humour, going back to just after his book was published, when Barbara Streisand bought the rights to make it into a film. Since then an impressive list of directors, including Bernardo Bertolucci, David Lynch (with a screenplay written by Dennis Potter), Terence Malick, David Cronenberg, Emir Kusturica, Hector Babenco and Pedro Almodovar have been linked with the film, along with actors like Isabella Rossellini, Anthony Hopkins and, tragically, Brittany Murphy.

Nobody talks about The White Hotel's place in the literary canon anymore, but then again nobody talks about the canon except as an instrument of hegemonic cultural oppression or, conversely, as some vague cultural ideal we need to defend (but not, apparently, read.) Sometimes I miss that old world.