I DON'T THINK I PREPARED FOR A SHOOT IN THE FIRST FIVE YEARS OF MY CAREER the way I did for the one I did with George Clinton in the early summer of 1991. I'd photographed him with the P-Funk All-Stars two years earlier when they'd come through town, and alongside the Fela Kuti gig I saw in the same venue at around the same time, it was one of the best shows I've ever seen in my life.


I'd taken my camera along and shot a single roll of black and white. This is the best frame. Perhaps I should have shot more but, to be honest, I was too busy dancing. Thanks to my friend and P-Funk mentor Tim Powis I'd become a huge fan of everything Parliament-Funkadelic, which was a sort of natural progression from my interest in the Philly soul records that were hits on the radio when I was a kid and the punk rock and metal I'd come to love later.

Two years later Tim was an editor at HMV magazine, George had been signed by Prince to his Paisley Park label and we had a perfect excuse to do a feature interview with him when he passed through town with the P-Funk All-Stars - the circus-like rotating cast of musicians that he'd been touring with ever since legal troubles had claimed the Parliament and Funkadelic names. 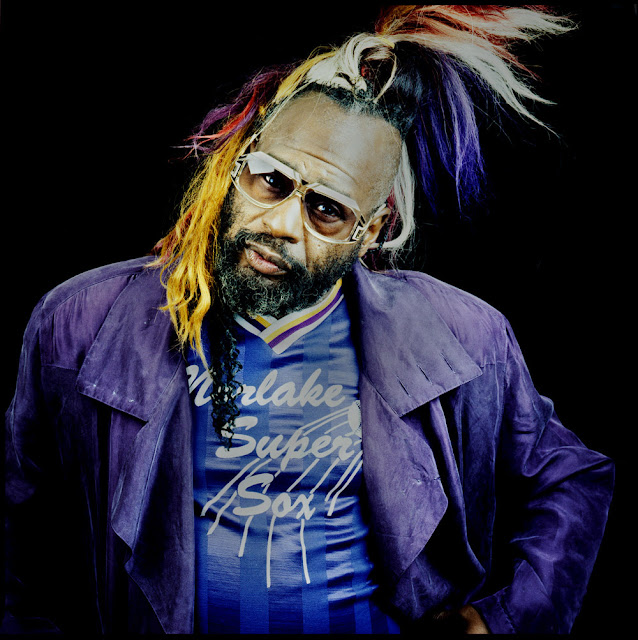 The shoot was in a room off the lobby at the hotel where the band was staying - a strange residential hostel on Church Street that I'd passed for years and had assumed was a slightly run-down apartment building. I brought along my studio camera, the Bronica SQ-a, and a black cloth backdrop that I gaffer-taped to a wall behind George.

I wanted to get the light to drop off sharply around George so I used the two smallest soft boxes I had and placed them on either side of his face. It produced exactly the effect I wanted but I didn't count on his big Cazal shades reflecting the lights in almost every shot - a classic rookie mistake. I shot four rolls of cross-processed colour film, then put a close-up filter on the lens of the Bronica to get some really tight shots, like the one at the top of this post.

I'm pretty sure HMV used the more madcap shots from this shoot, but looking at them again twenty-five years later, I'm fonder of the less antic, more uneasy expressions in the shots above. I'm not sure what sort of direction I gave George to get them - based on the contacts it was more a matter of snapping as fast as he could mug or throw a new shape.

I'm not sure if I did the shoot before or after Tim did his interview, but I do remember Tim bringing up conspiracy theories and George launching into a long, enthusiastic dialogue with him. I didn't dare interrupt - Tim was talking with George Clinton about Freemasons and the Illuminati and I knew that he was having the time of his life. 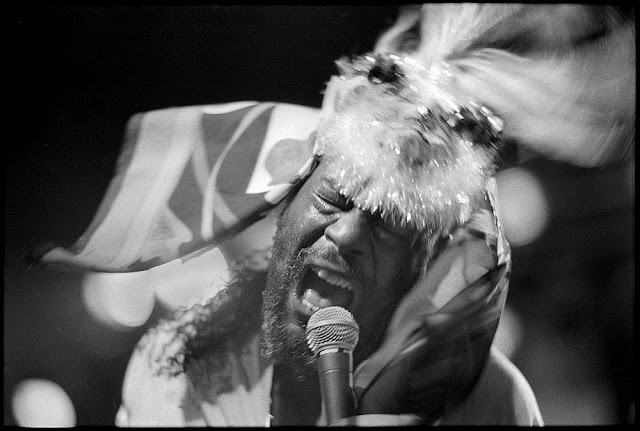 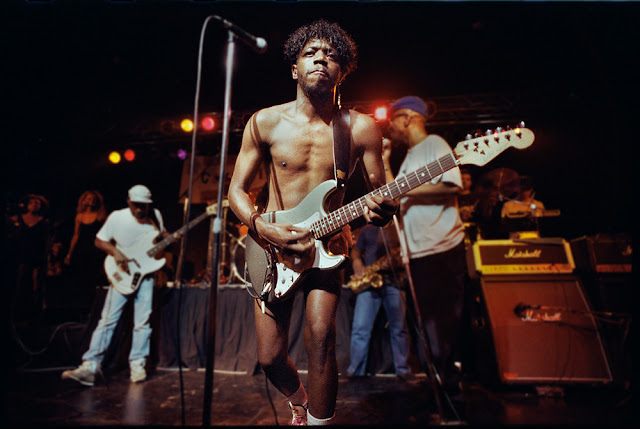 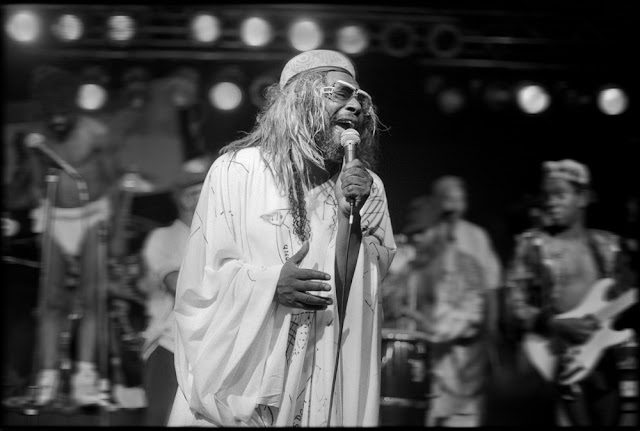 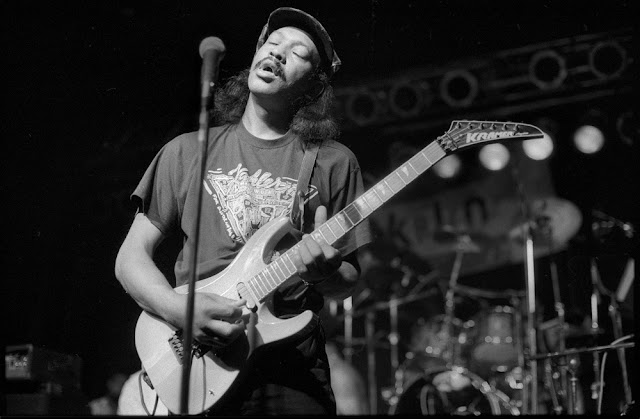 The show later that night was typical P-Funk anarchy. It wasn't as loose as the show two years earlier, which filled the stage with band, crew and family, with an onstage cartoonist doing drawings to illustrate the songs and encouraging the band's kids - loitering around between the amps and the risers and wandering at will - to do the same. (UPDATE: I've since learned that opening act Alix Anthony and his band were pressed into filling in for several All-Stars who were delayed at the border.)

Guitarist/singer Garry Shider - aka "Diaper Man" - had been George's onstage foil for over a decade by this point, and the two of them shared front man duties. It was a typically huge band, with half a dozen guitarists onstage at any time, including Shider, Dewayne "Blackbyrd" McKnight and the return of Eddie Hazel to the All-Stars, which made the whole evening a very big deal. 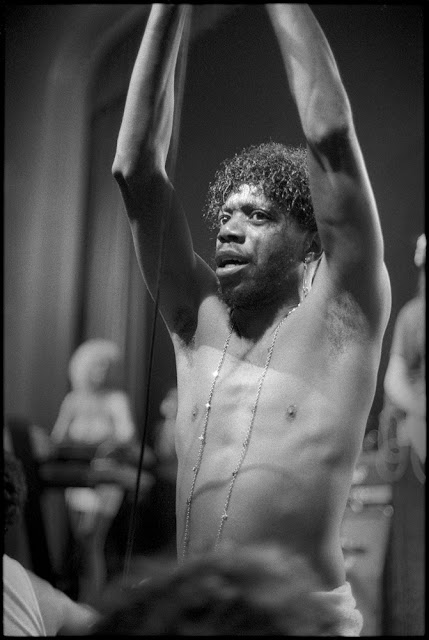 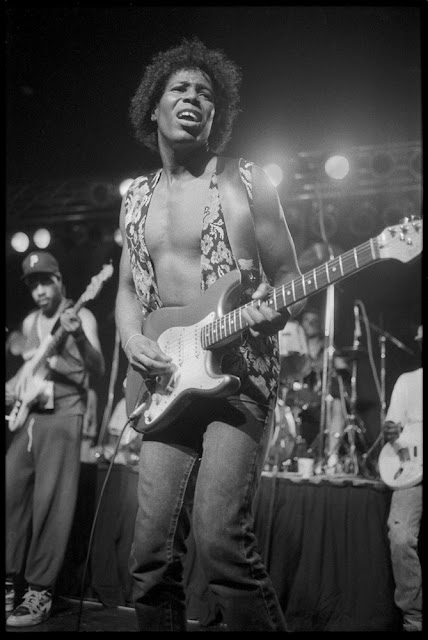 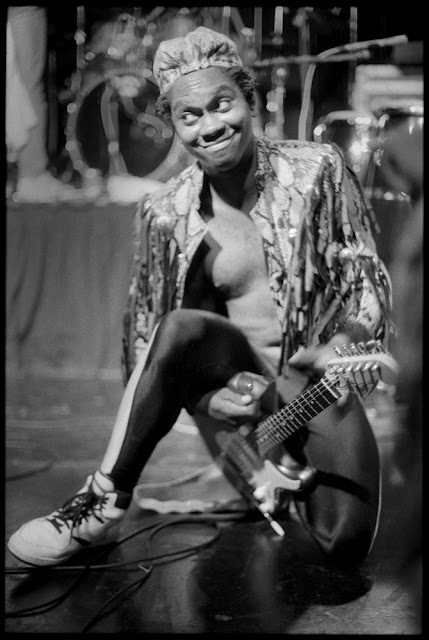 It was a fantastic show, and I shot the hell out of it with my Nikon - nine rolls of 35mm film; I felt greedy for the moment and wanted to have a document of the whole gig instead of the single roll I'd shot two years earlier. I don't think anyone has seen these shots since I took them.

At one point during my shoot earlier that day, George noticed Eddie Hazel walking through the nearby lobby of the hotel. "Hey Eddie!" he shouted. "You've got to wear your shoes, man! That was how you got sick the last time!" George motioned for Eddie to come over and I took four frames of them together. This is my favorite:

At this point I didn't know how my shoot with George Clinton could have gotten better. Eddie Hazel's playing on songs like "Maggot Brain" and "Super Stupid" made them some of my favorite Funkadelic tracks, and while knowing he was on the tour was a bonus, getting a shot of him with George just gilded the whole occasion. I knew Eddie hadn't been well, but no one knew that this would end up being a kind of farewell tour.