Shadowy Men on a Shadowy Planet & the Sadies


IN THE SUMMER OF 1985, JUST AFTER DROPPING OUT OF COLLEGE, I went to see Husker Du play a nasty shithole of a club called Larry's Hideaway. There were two local bands opening for them; one was Norda, a noisy post-punk offshoot of another local outfit called Sturm Group. I didn't like them much. At the bottom of the bill was a group I'd never heard of before - Shadowy Men on a Shadowy Planet.

When they started playing my buddy Rock and Roll Dave turned to me and said, "Hey - surf music! I like it!"

I couldn't help but notice the band's drummer.

"Dude - it's that punk guy who lives near Runnymede subway station," I shouted to Dave over the music.

Indeed, punks were scarce enough on the ground in Toronto that seeing one in your neighbourhood was something worth noting, and I'd spotted Don Pyle, the Shadowy drummer, on and off for years while waiting for the 71A bus home. In my mind he was something of a celebrity.

Fast forward five years and Shadowy Men on a Shadowy Planet were a local favorite who had developed some fame outside the city as the house band on Kids In The Hall, a comedy series that was basically SCTV for my generation of Canadians. Don was now my upstairs neighbour in the loft building I lived in on Queen West, so organizing a shoot was pretty simple when I was asked to take the band's photo for the cover of NOW magazine. 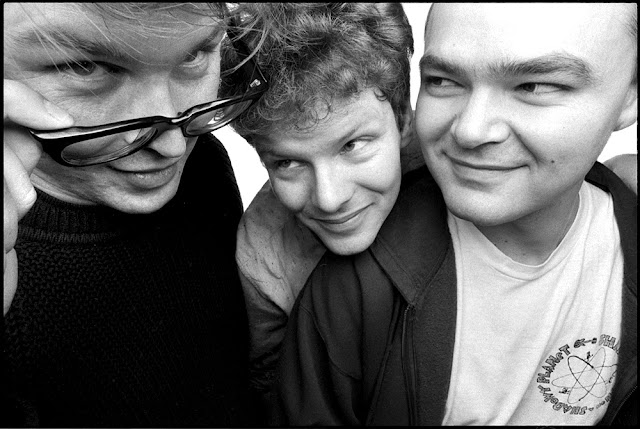 The photo at the top of this post is a frame from the roll of slides I shot for the cover. I can't help but regard it fondly today as it captures a glimpse of a corner of my first studio, in the bedroom of my Parkdale loft, where I had to fold away my futon and push the furniture to the walls to make space for lights and backdrops.

I haven't a clue why Reid Diamond, the band's bassist, is holding those playing cards. He must have had a reason.

The next two frames were shot for the inside of the magazine, to go next to the story. I think I'd just bought a 20mm lens for my Nikon and used it whenever I could. Pretty sure my direction for this shot was something along the lines of "Hey - remember that Cure video where they're locked in the wardrobe?"

In the top frame Brian Connelly, the band's guitarist, is doing something we used to call "the Risky Business." No seriously, we called it that. 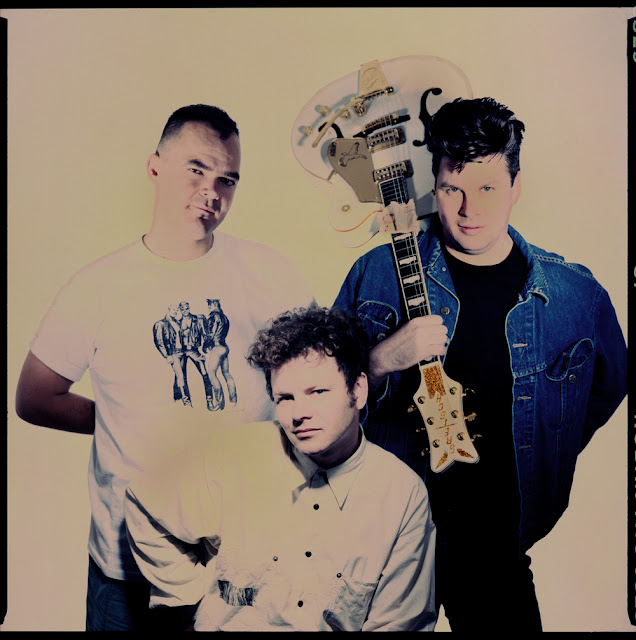 Three years later Shadowy Men had released a new record, Sport Fishin', and their reputation was probably greater outside Canada than locally. (Steve Albini, who had just produced Nirvana, famously said that he'd work with the band for free, and Sport Fishin' was recorded at his Chicago studio.) SPIN assigned me to shoot the band for a feature, so once again I went upstairs and knocked on Don's door.

We shot a couple of rolls in my studio, then went around the corner from our building to Beaty Avenue and did another three rolls in front of a globe that someone had planted in their front yard. I was in the full throes of my cross-processing mania, so I did slide film in negative chemistry and negative film in slide chemistry, and I suppose that's what makes these shots look, to me, as "period" as an Ace of Base remix.

That and Don's Tom of Finland t-shirt. Man, those things used to be everywhere.

The Shadowy Men wouldn't release another record. The band broke up after Brian had a disagreement with Reid and Don about recording with Jad Fair. (Understandable - a lot of people were having disagreements about Jad Fair back then.) Brian would form his own band, Atomic 7, while Don and Reid started Phono-Comb with Bev Breckenridge of Fifth Column and guitarist Dallas Good, who I'd met when he was playing with a local group, the Satanatras.

Sadly, Reid Diamond passed away in 2001. The Shadowy Men reunited briefly for a couple of gigs with Dallas playing bass four years ago, and have reunited again for a joint tour with Dallas' band, The Sadies. They're playing two nights here in Toronto starting tonight, before heading off on dates from Windsor, Calgary and Vancouver to Wisconsin, Illinois, Oregon, Washington and California. 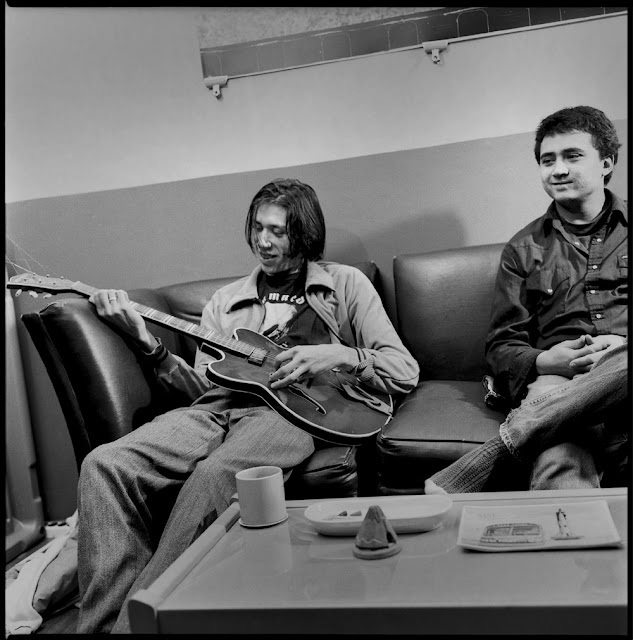 These are photos of the earliest lineup of the Sadies, before Dallas' brother Travis or drummer Mike Belitsky joined, when Andrew Scott of Sloan was in the drum chair. I have no idea who I shot these for, but Dallas, bassist Sean Dean and Andrew are sitting in Don Pyle's living room, upstairs from my place in the Parkdale loft building.

I've hauled my Rolleiflex and a couple of strobes up to Don's, and bounced the lights off the ceiling so I could get something loosely composed and informal - I might have been obsessed with the look of old documentary films from the '60s at the time, but I honestly don't remember. I can't think of much I've ever shot that looks like this; I might have done these for NOW magazine, intending to put them together into a collage, but I couldn't tell you today.

I do recognize the guitar Dallas is playing. It's a Hofner and I used to have one just like it. Is he playing my guitar? Who knows? Maybe. (UPDATE: Nope. Don says it was his and that he still has it.)

Brian continued with Atomic 7 and has played with Neko Case, while Don has worked on a dizzying variety of projects in addition to publishing a photo book documenting the early days of Toronto punk. We both moved out of the Parkdale loft building in 1999 when the landlord turned it into offices.

The Sadies are probably the best band playing and recording in Canada on any day with a 'y' in it, releasing at least ten records under their own name (and more as collaborators) over the last twenty years. They've done it all outside of the major label system, following the example of the Shadowy Men, who refused to let Lorne Michaels buy the rights to their music on Kids In The Hall. If I need to feel proud about Canadian music, I have to try to remember how some of the best of it happened - literally - right next door to me.

Reid Diamond died of cancer in Toronto on February 17, 2001.