THEY'VE MADE A MOVIE OUT OF J. G. BALLARD'S NOVEL HIGH RISE. Back when I took these pictures the idea of a motion picture based on a Ballard book seemed outlandish, even though Steven Spielberg's adaptation of his Empire of the Sun would come out that year. Up until that autobiographical novel, Ballard's work was simply too dark, too strange, too forbidding to cast with movie stars and project on a screen in some multiplex.

If Ballard was to be seen onscreen, it would be something suitably odd and marginal, like the 1971 short film based loosely on Crash, starring Ballard and the lovely Gabrielle Drake, sister of doomed folk legend Nick Drake. I couldn't predict - and still scarcely believe - that David Cronenberg would make a feature film out of Crash barely a decade after I took these photos. Even more shockingly, someone made a film of The Atrocity Exhibition after that and then, with suitable absurdity, a Swede directed a Portuguese movie version of Ballard's short story "Low Flying Aircraft."

And now High Rise. From the looks of things, the world is catching up to J. G. Ballard. And perhaps that's not such a good thing.

Ballard was a literary star when I took these pictures for (I think) Nerve magazine - Empire of the Sun had been a bestseller, the Spielberg movie was imminent, and he had a new novel out, The Day of Creation. I remember being quite overawed by having him in front of my camera; I'd shot a few movie directors and a lot of bands but Ballard was a major writer whose reputation - at least in my circle of morbid deviant friends - was stellar.

The shot just above was a very early attempt at making a high-key portrait, well before I actually knew how to do such a thing with technical precision, so I simply placed him in front of a window in the (I think) Park Plaza Hotel and ended up with what was a painfully difficult negative to print, given my limited skills. I don't know why I didn't print the photo at the top of this post; I can't even tell you if I asked him to close his eyes or whether I just snapped the shutter when he did. Scanning it after picking it out from a very dark contact sheet the other day yielded a very pleasant surprise; I like it a lot.

I don't think anyone has seen these shots in nearly thirty years. 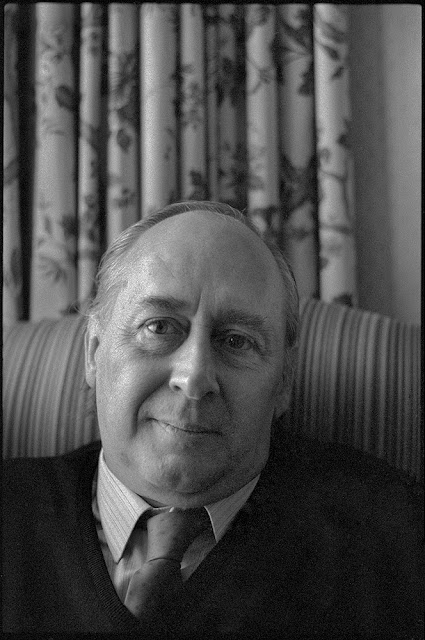 Ballard was quite charming - hardly the stern, even lugubrious counterculture figure I expected, he was very much the middle class English gentleman, remarkably tolerant of a fumbling young photographer. I do remember him being a terrible flirt with the female publicists from his publishing house - a widower when he was just 34, he had a rakish ease with women that probably impressed me as much as his celebrity.

James Graham Ballard died of cancer in London on April 19, 2009.