THE PHONE RANG EARLY AND I DIDN'T WANT TO ANSWER IT BUT I DID. It was Graeme Kirkland telling me he wanted to come over and do a photo shoot, right away. I tried to talk him out of it; it was early, I was tired, and I frankly wasn't feeling that inspired on that particular chilly morning caught between winter and spring.

"No, I just got out of the hospital," Graeme insisted. "I got beat up pretty bad at Sneaky Dee's last night by a bunch of skinheads. I want to get a photo of myself like this."

I don't think I thought about it much.

"Come right on over, Graeme." 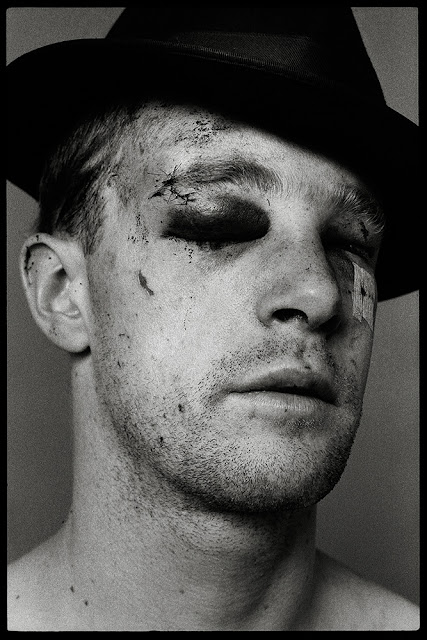 He was a mess. It's a shame I only shot these in black and white because Graeme's bruises were a really intriguing spectrum of purple and red and blue and yellow. (Colour film and processing cost money and I doubt if I had any sitting around the studio in those early, very penniless days.) I don't know how he saw through eyes that were swollen shut. He had a fat lip and stitches and tape holding his skin together and crusts of blood clinging to his face where the nurses in emergency hadn't cleaned it off.

I set up the light - my only light, probably - to give a stark effect, like a police evidence photo. We shot for two or three rolls - long enough to have Graeme shed his bloodstained jacket and shirt and finally wrap the shirt around his head like a turban. I can't remember whose idea that was. I asked him how it happened and he said that he was drunk and hitting on girls and he probably said the wrong thing to the wrong one and that the skinheads waiting for him by the bathroom at Sneaky Dee's were definitely not drunk and knew what they were doing. 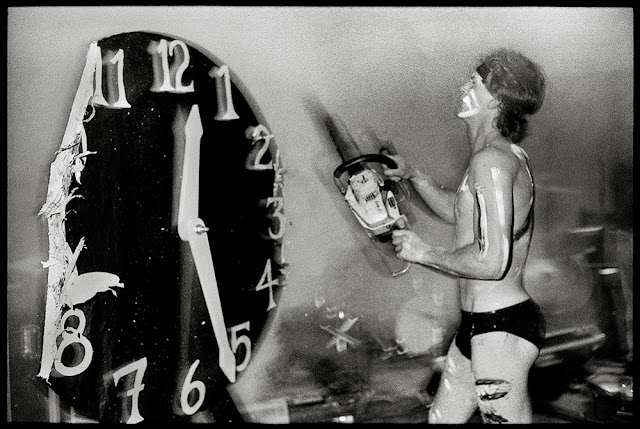 I photographed Graeme a lot back when he was the jazz drummer who knew how to get noticed in a city that didn't especially notice jazz musicians in general. He'd do shows like "Clock Destruction" - a performance piece as much as a show where he played in body paint and briefs and set about a big wooden clock with a chainsaw and a flame thrower. The inspiration, he recalls, was all the deadlines he had to deal with managing his own career. "What if I could be free of it?"

Looking back, it's a miracle he didn't burn down a club.

He also took to busking in a big way, and you'd find him out in the streets playing in all weather - like the snow storm where I photographed him in the shot below. Look closely and you'll see a copy of Sleep Alone, the record with a cover featuring my portraits of him after his skinhead encounter, taped to his tom. It wasn't the most audacious thing that Graeme did by a long shot, and those photos ended up being my own ticket to an encounter with the music industry legend that is Michael Alago, but that's a story for another day.


By the late '90s Graeme felt that he was doing more work setting up shows - booking venues and getting grants and finding players and doing publicity - than actually playing music. "I didn't feel like a drummer any more," he told me. "This is marketing. I had become a businessman."

So if playing music had turned him into a businessman, Graeme quietly decided to pursue that path, and got himself an entry-level job at a securities trading firm. Nearly twenty years later he's a senior investment advisor who's been on teams that have managed over $850 million dollars at a variety of banks and firms. I visited him at his new office in a leafy and venerable west end neighbourhood and convinced him to sit for some new photos after over twenty-five years.

"That was always my deepest goal," he recalled. "I wanted to live something so intense that you wanted to die from it. I still have that in me very deeply."

"I had experiences nobody else has had," he told me. "Doing exactly what I wanted to do." The only thing he regretted, if only for a while, was that he'd never gotten an MBA like all the other struggling traders at that first securities job. He hasn't had a drum kit in years.