AFTER BARCELONA, THE SECOND TRIP MY FUTURE WIFE AND I TOOK WAS TO CHICAGO. She had to cover a housewares convention and I decided to tag along; I'd been to the city at least a couple of times before, shooting covers for NOW magazine, and I liked it. Chicago occupied some sort of middle ground between Toronto and New York City, in terms of size and scale and urban density, and as a result felt very familiar from the first time I went there.

We decided to take the train - VIA Rail from Toronto to Windsor, then Amtrak once we'd crossed the border at Detroit. Along the way we got a nighttime glimpse of the horror that is Gary, Indiana, and an up close encounter with the gentle manner of pre-9/11 American Customs and Border officials. ("Next time you're here ya should learn English," bellowed the lady with the badge and gun at the pair of frightened Japanese grandmothers in our train car. Seriously America, I love you, but you've got to find better people to work as your greeters.)


Our accommodation was provided by a novel precursor to Airbnb - a (now defunct) service that rented out spaces in heritage buildings for tourists. We managed to snag the home of one of the owners of the service - an apartment in the iconic Marina Towers building right on the river in downtown Chicago. (Soon to be made even more iconic by the cover of Wilco's Yankee Hotel Foxtrot record.)

I brought just two cameras with me for the trip - a Rolleiflex, and a disposable Kodak panoramic camera. I'd been a fan of the FunSaver panoramic camera since Kodak brought them out in the late '80s. I'd always wanted to own a proper panoramic camera - a Widelux or a Linhof Technorama or a Fuji GX617 or a Noblex - but I could never afford more than a rental, so I mostly had to console myself with the Kodak. The FunSaver wasn't a true panoramic; it just shot a cropped 35mm frame instead of a stretched negative, but its grainy results were intriguing, and in 1990 I was in a group show - my first ever - featuring photos taken with the FunSaver. 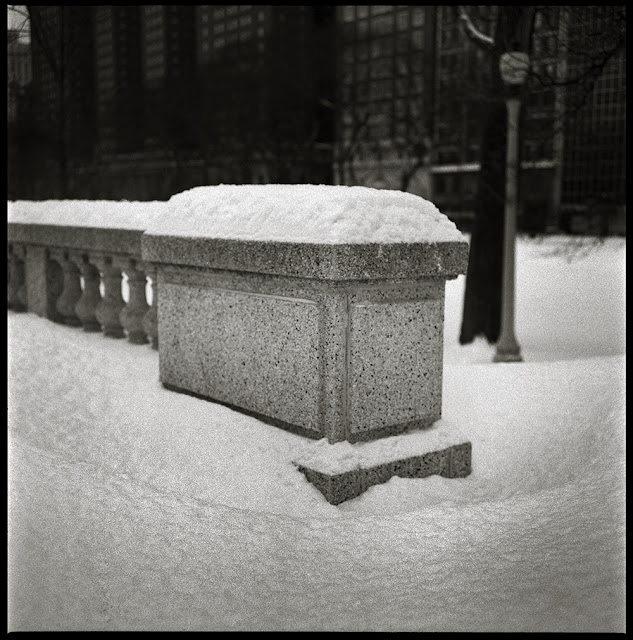 Chicago was in the depths of winter when we arrived, under a fresh snowfall. While K went off to the convention centre for her show, I headed out to Grant Park with my cameras, detouring via the El and the old downtown. Down by the lake the city seemed deserted, and I ended up with some pretty somber shots on my roll. The view at the top of this post, by the way, isn't there any more - the Harrison Hotel is a Travelodge now, and the view to where its sign would have been has been filled in by a big, glass-fronted building.

These photos might make our Chicago trip seem like a bleak affair, but we actually had a lot of fun. We ate dinner at the old Berghoff and Rick Bayless' Topolobampo, and spent an amazing afternoon at the Chicago Historical Society's museum - a model for any city museum. We had dinner at my super successful cousin Donna's massive loft near the El and - at K's insistence (she was writing a story) - did high tea at American Girl Place.

The latter was apparently a test; K wanted to see how I'd deal with such a hyper-girly experience; what I remember isn't the strange looks I got as a man in the very male-free room, but us as a couple eating there without a child. Notwithstanding, I apparently passed the test, which would prove useful a few years later when we became parents to daughters.