IN THE SUMMER OF 1997, THE CATHOLIC CHURCH A FEW BLOCKS FROM MY PARKDALE LOFT BURNED DOWN. I was not a churchgoer, so it didn't really register with me except as something to rubberneck for the months when the charred remains of the building were on view, and during the subsequent demolition. To be honest, I had a lot going on in my life at the time, including some big changes in my business and the early stages of a new relationship with the woman who would later become my wife.

I didn't think about what was going on with Holy Family until reconstruction began two years later. It's not often you see a new church being built, and I was curious about what form it would take as a tall steel frame quickly took shape over the newly excavated basement. My fear that some sort of ugly modern "worship venue" would replace the homely old 1902 building was allayed as the new building began to take the form of what looked like a basilica. (Even as a lapsed Catholic - or perhaps because of it - I was an awful snob about church architecture.) 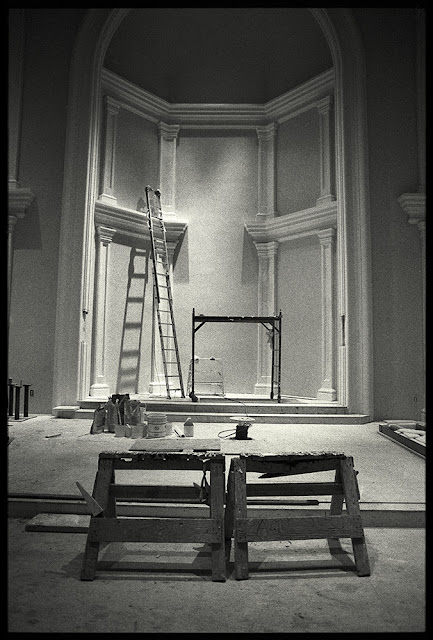 I don't know when I became fascinated with the process of creating a new house of worship, but I somehow managed to get access to the interior of the new Holy Family while I was working on a story about iconic Toronto architecture for eye weekly. I took less than a dozen frames of the interior of the church at the end of a roll, shooting the apse without its altar or tabernacle, with a ladder propped - significantly, I thought - against the wall where a crucifix would soon be hung.

I came back home with an idea to write and illustrate a story about the consecration of a new church, hoping to sell it as a story about a unique kind of space in a city full of construction cranes and redevelopment. I contacted the Fathers of the Oratory, who were in charge of Holy Family and the seminary attached to the building, and got permission to come back again, where I took another roll of the progress that had been made. The crucifix had been hung behind the new wrought iron screen and the unfinished base of the unconsecrated altar, and the organ was being assembled in the choir loft. 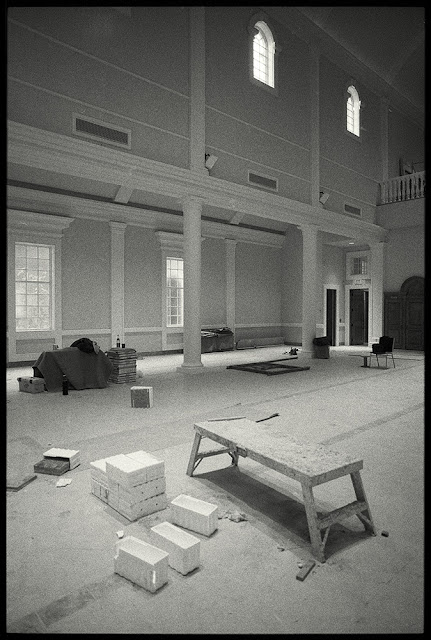 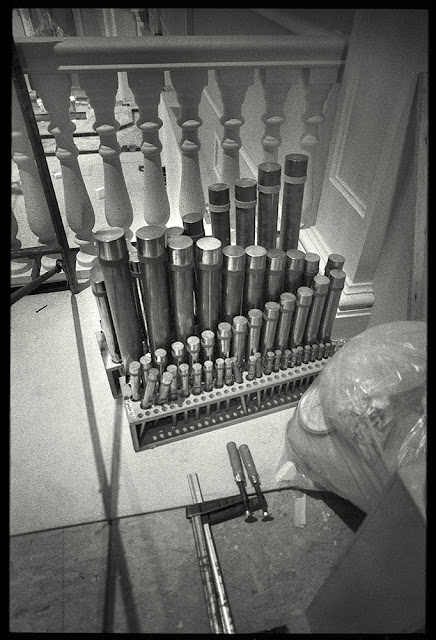 I interviewed the architect, who told me that he had based his design on the Church of the Gesu in Rome, and several of the workmen, who stunned me by saying that they looked at what they were doing there much like any other job. I found it hard to believe; even in my lapsed state, I imagined something inherently spiritual in the creation of a sacred space, even if it was being put together with the most modern of materials - structural steel, engineered concrete and prefab components like the cupola, slotted into space on the roof like a building kit.

At the end of my shoot I had a nice chat with Fr. Dan, one of the Oratorians, then came home, where my girlfriend quizzed me earnestly about what had happened down at the building site. She seemed unusually curious about it all, and said she'd like to go talk to one of the Fathers; I told her that Fr. Dan seemed nice enough, so she made an appointment to see him within a couple of days. It would turn out to be life changing, for both of us.

I never wrote my piece about the rebuilding of Holy Family; my own curiosity had made me overlook the indifference, even hostility, to commissioning stories about religion at any of the small number of magazines or newspapers in the city. My girlfriend's chat with Fr. Dan, however, drew her back into the Church after years away, and pulled me back in her wake. A year later we'd be married - in Latin - by Fr. Dan at Holy Family, and three years later our first daughter would be baptized there.