A CAREER IN JAZZ CAN BE A VERY FRAGILE THING. Gigs are scarce and recording dates scarcer and whole careers can come and go with only glimpses captured in a handful of records and a few photos or newspaper articles. I suppose the precedent for this was set right at the beginning of the music with Buddy Bolden, a hugely influential, even legendary New Orleans trumpeter for whom no recordings exist.

Claude Ranger's career wasn't nearly as obscure as Bolden's, though he was a legendary figure in Canadian jazz, made more so by his mysterious exit from the scene and the fact that he left without any commercially available recordings of himself as a bandleader. When I took these photos of the Montreal-born Ranger in the summer of 1988 he was hardly obscure; after living in Toronto for many years he'd moved to Vancouver, but was still in demand here as a sideman, and had come back to do some dates with my friends Jane Bunnett and Larry Cramer, just after having played on Jane's debut record, In Dew Time.


I photographed him twice, and thanks to my friend Mark Miller I've been able to figure out that one shoot - a dim, shadowy set of photos - was taken at Sneaky Dee's, a little Mexican eatery/club that was located at Bloor and Bathurst before it moved down Bathurst to College and became a legendary punk rock dive. I shot a whole roll tucked into a corner of the stage, trying to get a good shot of Claude in the shadows near the back.


The other shoot was apparently at Clinton's, where I was so desperate to get some good photos of Ranger playing that I brought my own lighting - a single flash on a light stand, bounced into an umbrella - and shot him during soundcheck. Drummers are notoriously the hardest people to get decent shots of during a show, since they're usually at the back of the stage, in the worst light, and moving constantly. I suppose Claude knew this, which is why he agreed to let me do this little staged setup - halfway between a live shoot and a portrait. 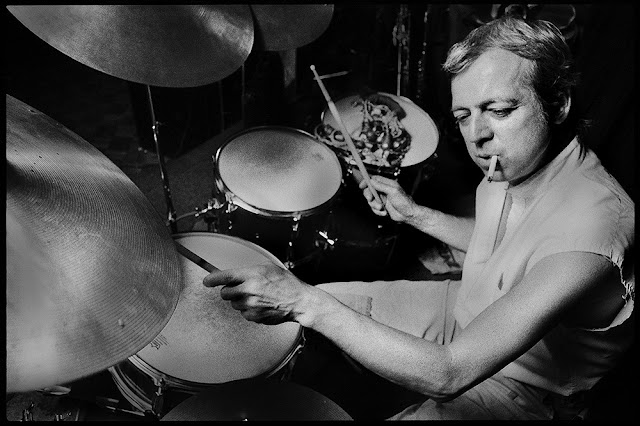 Claude was a monster of a drummer, famous for his stamina and energy and love of improvisation, but also for his ability to keep a cigarette lit in the corner of his mouth for a whole set, lighting each new one off the old butt without breaking stride, even during a solo. My good friend and jazz mentor Tim Powis, also a drummer, was a huge fan, and was probably my inspiration for trying to get some really decent shots of Claude playing.


Claude lived pretty hard, and ended up with health issues that saw his public appearances get scarcer in the late '90s. He played a lot of shows with a lot of people, but few of them ended up becoming records, and so Ranger's career ended up being one recalled only in glimpses and stories. It probably didn't help that he lived in all three major Canadian cities, each with their own discrete, sometimes insular scenes, and seemed to care more about playing concerts than negotiating record deals.

There are more than a few jazz careers like Claude Ranger's here in Canada, and while a lot of them have a tragic component, none of them end so mysteriously as his. It's confounding that someone who made such an indelible impression on the bandstand could simply vanish from the country's musical scene and then from the world.

Claude Ranger disappeared near the Abbotsford area of British Columbia in late 2000.