MY RECENT POST ON SHADOWY MEN FROM A SHADOWY PLANET got me thinking about my old studio in Parkdale again, where I lived for over a decade, and nearly the whole of the '90s. Until my daughters were old enough to get themselves to school on their own in the last year or two, I passed it nearly every weekday, and I don't think I was ever able to walk by without looking up at the windows of my old place.

I discovered 1499 Queen Street West in 1988, on a tip from someone my girlfriend knew about a cheap, big place that came with a catch. The "catch" was that the landlord had been trying to evict the tenants illegally, hoping to turn the big old pool hall/bowling alley into medical condos. The three of us moved in - my girlfriend, her sister and myself - and I suddenly had the luxury of enough space to set up a photo studio and a permanent darkroom.


The shot above was taken in the room I shared with my girlfriend, one of three big, narrow rooms, two of which had windows overlooking Queen Street. If I folded up our futon and moved the furniture to the walls there was enough space to roll out a white seamless and do a group photo like this one - four Toronto chefs shot for NOW's end of year "best of" issue.

Most of the roll I shot was a tight, high-key shot, but I pulled back for the last few frames to show my strobe box and cables, the seamless roll and a bit of the room. You can see my filing cabinet in the corner underneath the window, a big Glenn Gould poster I'd taken home from my job at A&A Records on Yonge Street - my friend Larry Cramer and I holding it down on the roof of his car while he drove me home - and a painting my girlfriend had done. 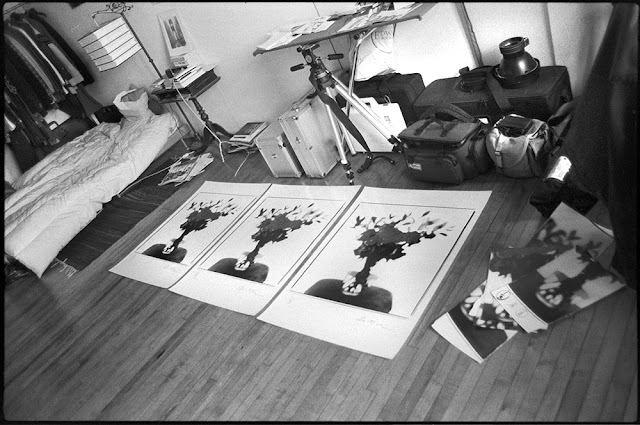 Here's another view of the room, just after my girlfriend had moved to New York for film school. I'd come back from the colour darkrooms at Toronto Image Works with a set of 30" by 40" prints I'd done of my first really decent floral still life and I was overcome by a rare urge to document the moment. My camera gear is in cases against the wall, my leather jacket on the back of my desk chair, and a new comforter on the bed.

At around this time the landlord stepped up his program of harassing us out of the building, hiring a pair of thugs - one of whom was up on a manslaughter charge - as "superintendents," whose main job involved gutting the empty units as loudly as possible, ripping holes in the drywall in the halls, cutting off the heat, writing threatening graffiti on our doors and plugging our locks with toothpicks.

I came home after visiting my family for Christmas to find that they'd hung a speaker through a hole in the floor into the empty unit next to ours, blasting country music radio at top volume. They'd picked the wrong people and the wrong building, though. This wasn't a typical Parkdale rooming house full of out-patients and recent immigrants; my neighbours included an art director and a buyer for a luxury department store whose sister worked for the CBC, the big national broadcaster.

She got them to produce a news segment on the building which scandalized our landlord's investors. He got slapped with a bench warrant for his arrest and the building ended up getting sold to the social service agency on the main floor who'd also endured his harassment for years. The rent - already cheap at $600 a month - went down for a year or two to just over $450 in consideration of the reconstruction work that would have to be done while we lived there.


By the end of the summer of 1993 I was living there alone, and turned the other bedroom into a permanent studio after ripping out a closet and painting the walls white. I must have still been buzzing on all this new space when I shot the Lowest of the Low, a local band with a big following, probably for HMV magazine. I cleared out the room, bounced my strobes off the ceiling and went for the most artless, stripped-down group shot I could make - four men in a room - to celebrate what I saw as the beginning of a whole new phase in my career.

I loved this space. It had its problems - it was too narrow and the windows were on the wrong wall - but it was cheap and it was all mine and I learned to really use artificial light there, spending days playing around with strobes and tungsten movie lights, backdrops and colour filters. Every now and then I couldn't resist the urge to make it part of a shoot, like this photo of D.H.I., a local industrial band I shot for NOW just after I'd set up the room.


I had always loved old Hollywood glamour portraiture by people like George Hurrell, Scotty Welbourne and Clarence Sinclair Bull, and worshiped at the altar of photographers like Irving Penn and Richard Avedon. I dreamed of turning this little space into my atelier, and tried to get my subjects to come there whenever possible. My goal was being able to hole up there without leaving for the winter, using couriers and credit cards to pick up film and supplies and deliver finished shoots to clients. With my cheap rent and low overhead it was almost possible, but I can only imagine now how easy this would have been today, with the internet and digital cameras.

With time I collected more lights and gear, and built flats to help block and modify the light. I bought a 4x5 view camera to get even closer to my retro studio ideal and began wearing suits when I shot. I might have been going a little mad, but it was a long, sustained period of creativity that I still cherish today, even though it distracted me from the fact that, outside my windows, the photo business was starting to contract and change fundamentally.


The shot above is from the peak of that creative period. While shooting the cover of a record for Suckerpunch, a local group, I decided to take out my Rolleiflex and get a shot of the band in the middle of all the studio setup, with my Bronica on a tripod in the foreground. (I can't help but notice a rented Elinchrom strobe on the left - by this point my setups required four or more lights.) I wish I had a way to describe how much I loved having so much control of my shoots; the only way I could have even more was to eliminate the human element and shoot still-lifes.

All good things come to an end, however. In early 1999 we got a notice that the social service agency that bought the building wanted to convert it into offices and affordable apartments for their clients. They gave us months of notice and free rent but my time at 1499 Queen West was coming to an end and with it my studio and darkroom. I was living with the woman who'd become my wife by this point, and we moved around Parkdale for a few years. I'd manage a few makeshift shoots in spaces I'd set up on a rooftop deck or our living room, but I haven't had regular access to a studio since then.


I still miss my old studio. I don't miss the anxious, often depressed man I was for most of the time I lived there, so I can only imagine how much more happily I'd work in one now. Not every photographer needs a studio - my friend Chris Buck has never really considered them a necessity - but I remember how much I enjoyed walking into mine every morning, setting up for an assignment or just a day of tests.

We have an empty garage at the back of our house that I've always hoped to convert into a studio if the money was there. I imagine something like Irving Penn's little shooting space in Paris, with a skylight on the north side. Just a few steps from our garden, it would be the perfect place to shoot still-lifes and maybe - just maybe - the odd portrait.