I AM THE SON OF A WORLD WAR TWO VETERAN. Like many similar sons and daughters, Remembrance Day is a way of honouring the memory of those fathers, even if they survived the battlefield - or, as in my father's case, never went near it, spending the war on this side of the Atlantic, servicing bombers converted into cargo planes. I have taken countless photos of cenotaphs and veterans' graves, but I've only shot Remembrance Day ceremonies twice, at three different places where Toronto honours veterans, living and dead.

I was downtown on another assignment on the morning of November 11, 2008 when I realized that it was a short walk to the cenotaph at Old City Hall. I called the free national daily where I worked and told them I'd head over with my camera and get some shots, hopefully for the next day's front page. We had a new editor and I was eager to be useful; I also wanted to try and document a cenotaph ceremony at a time when it was becoming painfully clear that the generation that fought in World War Two was beginning to leave us as quickly as the veterans of World War One. 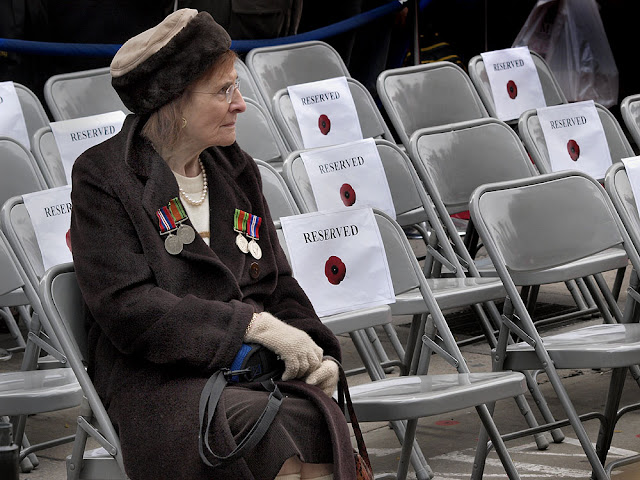 The city puts on a very nice Remembrance ceremony, with soldiers in period uniform, minimal speechifying and very well-managed laying of wreaths. The minute's silence in the centre of the city is a truly moving moment, and I never cease to be amazed at how such a large crowd responds to the occasion with real dignity.


There are always classes of schoolchildren at the cenotaph. I can't help but wonder what they're thinking, and how much they really know about the wars being remembered. As the son of a veteran, growing up with Rat Patrol and Hogan's Heroes in after school syndication, I'm part of a generation that still felt the shadow of World War Two amplified by the geopolitical hangover of the Cold War. Perhaps these kids are luckier than we were; I don't get the feeling that 9/11 casts the same shadow over their lives. I hope my anxiety about what sometimes seems like either indifference or amnesia is unfounded, but I have a bad feeling about it all.

And then there's always this guy:


There's a cemetery behind the wall at the back of our house, and from my office window I can see its centerpiece - processional rows of veterans' gravestones leading up to Edwin Lutyens' Cross of Sacrifice. A remembrance ceremony is held there at sunrise every November 11th, and a year after I was laid off from the national free daily, I covered it for blogTO, taking my daughters along on the way to school.

It's a modest ceremony, in a place full of men who died, often from lingering wounds, weeks or months or years away from the battlefield. This is probably the highlight of the year at what remains of the local Legion Halls, and the old men in their blazers and medals always move me. My father never joined the Legion or even talked about his war, but I always scrutinize each old veteran and scan their lapel and cap badge for some sign of the 168 Heavy Transport Squadron, imagining that one day I might finally meet one who knew my father.


After dropping the kids off at school I headed to Old Fort York, where the dead of not just the World Wars and Korea but the War of 1812 as well are remembered with redcoats and drummers and a short march from the old fort's walls over the common to the nearby garrison cemetery. It's the only remembrance ceremony that acknowledges that the city was once a battlefield, although the bright coats covered in braid might as well be chain mail or Roman armor, as distant as that past feels now. 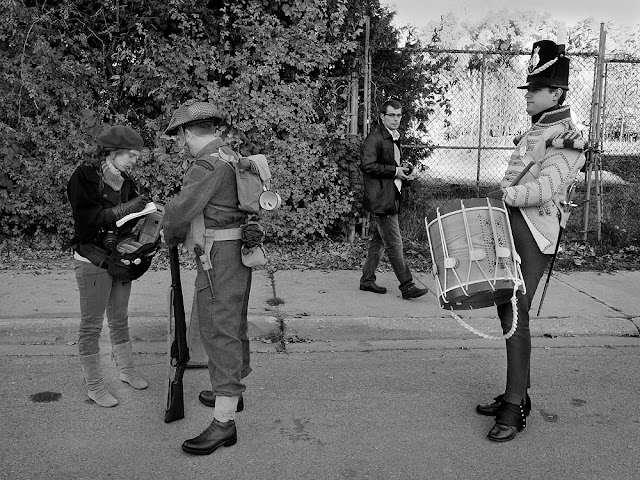 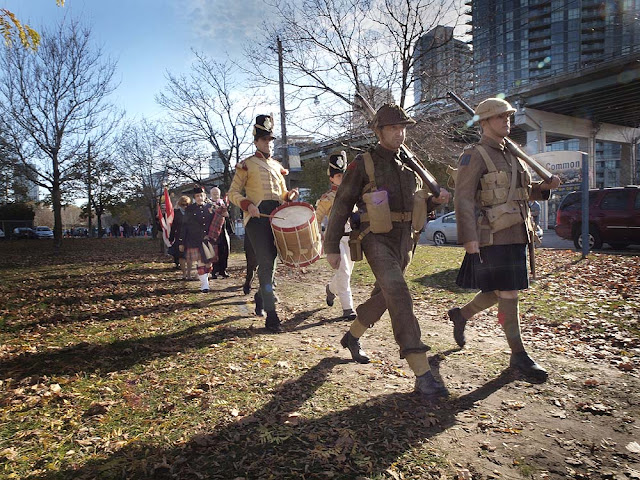 I met this quartet of friends at the end of the ceremony, old pals who celebrate November 11th together. It's been five years since I took this photo, and I wonder if there are still four of them today. The old soldiers are passing, joining the young ones, leaving us with the difficult task of remembering without witnesses.