I HAVE WAITED A LONG TIME TO TAKE THESE PICTURES. John Cooper Clarke - Doctor Clarke, as he refers to himself now, having received an honorary degree - showed up in Toronto last week, four months after cancelling a previous appearance, and thirty-four years after the last time he appeared onstage here.

I went with two friends and my new camera, the Fuji X-30 that is fast becoming my favorite camera ever. (Thanks again, Kathy and Arnie!) I hugged the stage and sweated bullets and shot a few hundred frames, hoping to make up for lost time and missed opportunities by getting as many decent shots as I could. In the end, I don't think I embarrassed myself. 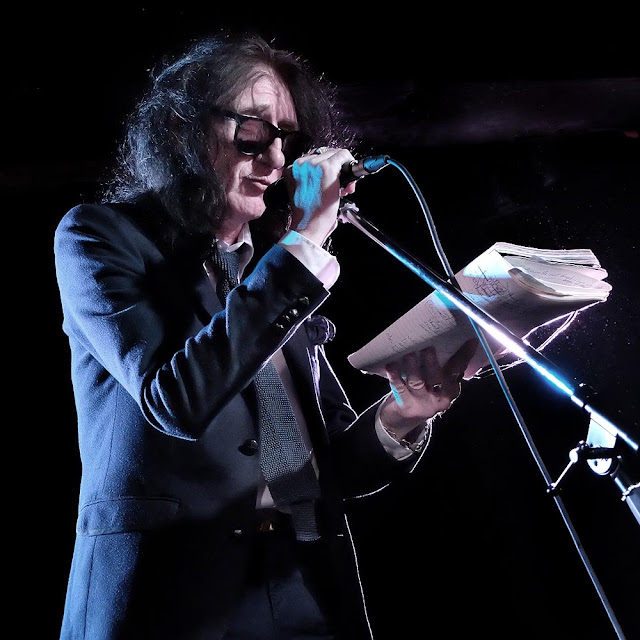 I first heard Manchester's "punk poet" John Cooper Clarke on CFNY-FM back at the turn of the '80s, where they'd play his invective masterpiece "Twat" late at night. Earlier in the day, though, their favorite Clarke track was "Beasley Street," a poem that he delivers at a breakneck pace solo, but which was showcased on the Snap, Crackle & Bop record with a stately musical setting, courtesy producer Martin Hannett and Clarke's "band," the Invisible Girls.

It was written to describe the post-industrial, pre-Thatcher urban decay of urban northwest England in general and Clarke's own Salford in particular, but to me it evoked the declining working class Toronto neighbourhood where I was growing up. Objectively - and with years of hindsight - I have to admit that Salford in the '70s was probably far more dire than Mount Dennis, but when you're young this sort of evocative squalor resonates deeply and romantically. 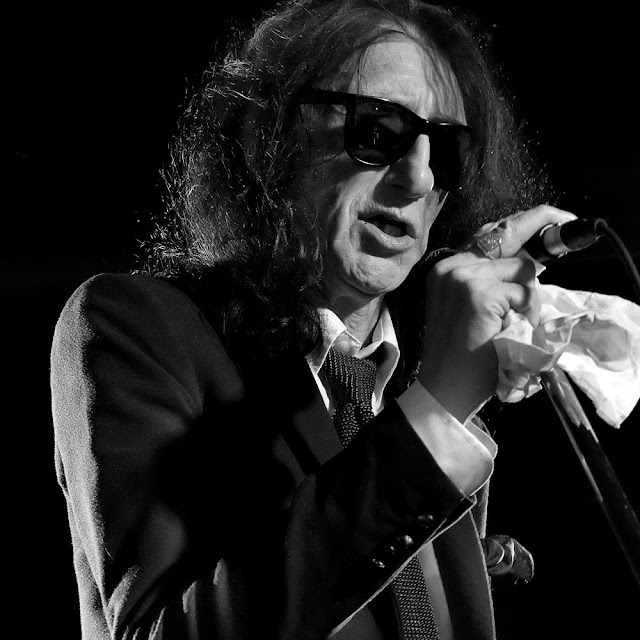 I went nuts with the live shots partly out of frustration; I'd been trying to arrange an interview and portrait shoot with Clarke since the gig was announced earlier this year, and it looked hopeful up until the night before the show, when my e-mail exchanges with Clarke's publicist went suddenly cold. I was desperate to make up for the lack of access with the best set of live shots I was capable of making

The thing is that Clarke has been my wish list of portrait subjects for decades, a list I made with my friend Chris back at the start of our careers. Chris has, I think, ticked off a few of the subjects on his own list; I've been far less lucky, and by now many of the names on my list are dead. Clarke survives, quite against the odds - he had a ferocious drug habit for most of the '80s, a "lost decade" where he wrote nothing - but considering the long interval between his Toronto appearances, I don't give myself decent odds on getting my portrait session. 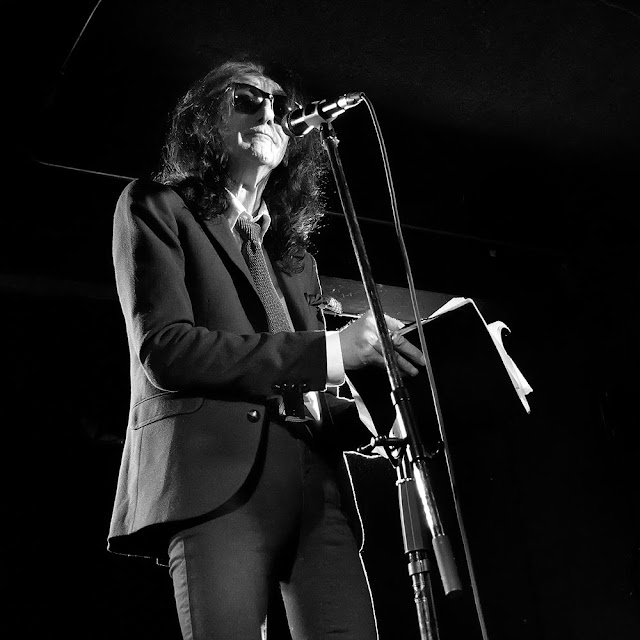 The crowd was, to put it charitably, of a certain age. It was largely the same bunch of aging punks I see at most of the rare gigs that tempt me out of the house - something that I find comforting and a bit pathetic at the same time, and I fully allow that I'm implicated in the blanket description of a "crowd of aging punks."

There were youngsters there, of course, but I have a suspicion that the wrinkly, paunchy, arthritic majority in the room were responsible for the warm reception Clarke's between-poem banter received. That stage patter and schtick made up the majority of his show at the Garrison by a considerable ratio, and it was often bawdy and even obscene, spiked with the wryly cruel humour that's as northern as pie and chips.

In front of English crowds, Clarke has acknowledged that he got his first big break, pre-punk, from Bernard Manning, back when he was doing the northern working man's club circuit. I doubt if a young crowd would have responded to Clarke's humour as happily; it wasn't anything like the "racist" material that made working class comedians like Manning both successful and reviled, but it was a product of a culture where everybody is a target for a jab or swipe, the teller included.

The young - the urban, "educated" young especially - have come of age in a far more anodyne world, where "problematic" jokes are like radioactive material, handled by sanctioned individuals, if at all. They seem to respond to humour with a sidelong glance, to see if anyone else is laughing, their outrage button never far away, but in a room like the Garrison where the oldsters got both the inspiration and the intent of Clarke's gags, they let themselves get swept away. Yay, old punks.