MY BEST FRIEND FROM HIGH SCHOOL HAS A HABIT of using the suffixes "-aroonie" and "-areenie" as a sort of antic affectation. I think he got it from old movies or Looney Tunes. One day, years after high school, he told me he'd run into an amusing, rather eccentric older gentleman at the Squeeze Club, a pool hall and hangout of ours. The man, he recalled with amazement, also used "-aroonie" and "-areenie" liberally when he spoke. It was the strangest thing, he said.

My friend didn't believe that someone - some actual person - had come up with that whole thing. I had to pull out a record and play it for him to prove it. I might have even had to find a couple of passages in a copy of a book I knew he'd never read:


"...we went to see Slim Gaillard in a little Frisco nightclub. Slim Gaillard is a tall, thin Negro with big sad eyes who's always saying 'Right-orooni' and 'How 'bout a little bourbon-arooni.' In Frisco great eager crowds of young semi-intellectuals sat at his feet and listened to him on the piano, guitar and bongo drums. When he gets warmed up he takes off his undershirt and really goes..."

"... Now Dean approached him, he approached his God; he thought Slim was God; he shuffled and bowed in front of him and asked him to join us. 'Right-orooni,' says Slim; he'll join anybody but won't guarantee to be there with you in spirit. Dean got a table, bought drinks, and sat stiffly in front of Slim. Slim dreamed over his head. Every time Slim said, 'Orooni,' Dean said 'Yes!' I sat there with these two madmen. Nothing happened. To Slim Gaillard the whole world was just one big orooni.'"

- Jack Kerouac, On The Road 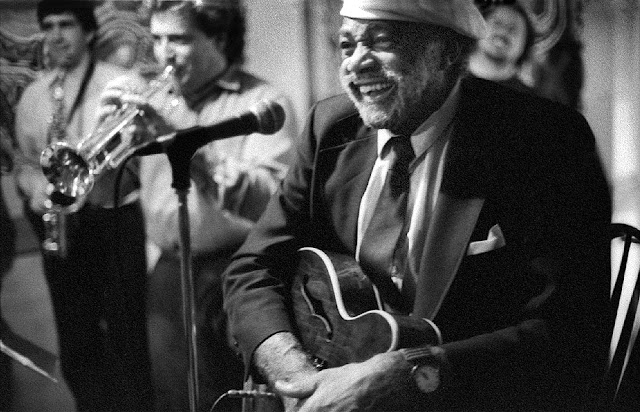 Slim Gaillard came to Toronto in the fall of 1989 for a series of frantically booked and rehearsed gigs organized by my friends Jane Bunnett and Larry Cramer. They had played with him before - I don't know if they backed him up for this show, but it's likely - and were used to the benign chaos Slim brought with him.

I already knew about Slim. I'd read about him a few years earlier and had a dubious British bootleg record that mixed some old radio sessions with some later, Latin-themed recordings. I thought he was fantastic. While I'd been struggling to understand jazz with records like Kind of Blue, Slim's weird, cartoonish pre-bop sides helped me get the music better than anything else.

And so I had to tag along when Jane and Larry told me that Slim would be playing an impromptu gig at Sneaky Dee's, a hole-in-the-wall Mexican eatery on Bloor Street that would later become a legendary punk and alt-rock venue when it moved south to College. (It's still going today.)

I stationed myself at the corner of the stage and shot the very loose, rehearsal-like show, with a band that Larry had pulled together at the last minute. I was transfixed by Slim, who effortlessly made himself the focus of the room, and wondered that the guy who recorded "Cement Mixer Putti-Putti" and "Flat Foot Floogie" was just a few feet away from me. 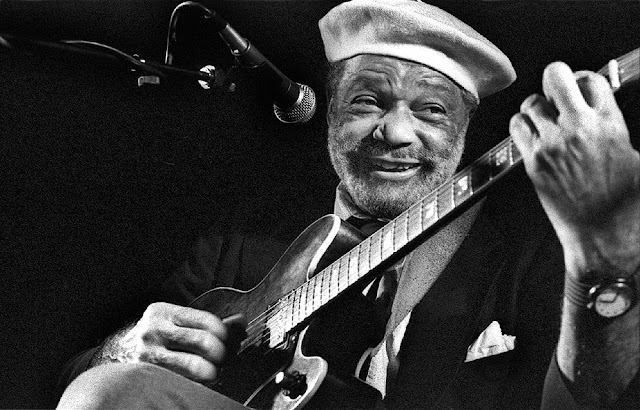 A few days later I got a panicked phone call from Larry asking if they could borrow my electric guitar - Slim wasn't in the habit of traveling with one, and they had a gig coming up at the BamBoo. I can't believe it, but I was actually hesitant; my guitar wasn't a collector's item or anything, but I'd saved up for a while to buy it and money was scarce enough that I wouldn't have another if something happened to it.

I made Larry promise to keep an eye on it all night and to make sure, I asked if I could come along and shoot the show, as a document of Slim Gaillard playing my guitar.

So I ended up with another couple of rolls of Slim live, full of great frames. The camera loved the man. What I can't understand is why, with Slim spending so much time in Toronto, I didn't ask for Jane and Larry to bring him by my studio - just around the corner from their house - for a quick portrait session.

Perhaps it was the customary madness that seemed to surround Slim wherever he went. Perhaps I felt intimidated. Perhaps I assumed that he'd be back in town to play with Jane and Larry again, and that my live shots would be a nice calling card to grease the wheels for a few minutes in the studio. In any case I was very pleased with the photo at the top of this post, and let myself believe it would be a close stand-in for a portrait until I had another shot at Slim. My mistake, and I regret my lack of initiative to this day.