MANY YEARS AFTER I THOUGHT I WAS out of the concert photography business, I ended up working for the free national daily, who decided it would be nice to have their own photos when Madonna came to town on her Re-Invention Tour, promoting her American Life album. It was an object lesson that, no matter what milestone you think you've reached, a paycheque will erase it like the chalk mark on the sidewalk it really was.

So on a summer night I found myself by the back wall of the mezzanine level of the Air Canada Centre with a rented 300mm lens on the paper's digital Canon. At least the monopod was mine. Shooting big ticket concerts, which meant running around in a pit in front of the stage shooting up a performer's nostrils back when I'd started, now meant standing in a small thicket of photographers a few hundred yards away from the stage, peering down at the performers like they were under surveillance.


I might have cared if I liked my subject more. Back in the days of "Into the Groove" I could appreciate Madonna as pop confection with an undeniable resonance, but this was the era of the London-dwelling Madge and her inexplicable Home Counties accent, and the louche girl from Desperately Seeking Susan had transformed herself into a preening, hard-edged celebrity with more than the usual retinue of grating pretensions.


Even after a years-long layoff, shooting a concert wasn't even a technical challenge. Thanks to digital cameras I knew what I was getting as I worked, and in 2004 that still felt thrilling. It was, in any case, the only thrill I'd have that evening. Unmoved as I was by the show - especially at over half a hockey rink's distance - I concerned myself mostly with composition rather than capturing the energy of the show, which in any case seemed wholly lacking, at least where I stood.

Knowing that I'd have to crop the worthwhile frames, I just tried to arrange the bodies onstage and catch some glimpses of the fans, some of whom actually looked as engaged as I wasn't. The rest seemed merely curious to be this close to a pop culture artifact, and often looked like they were inspecting it for seams and flaws. 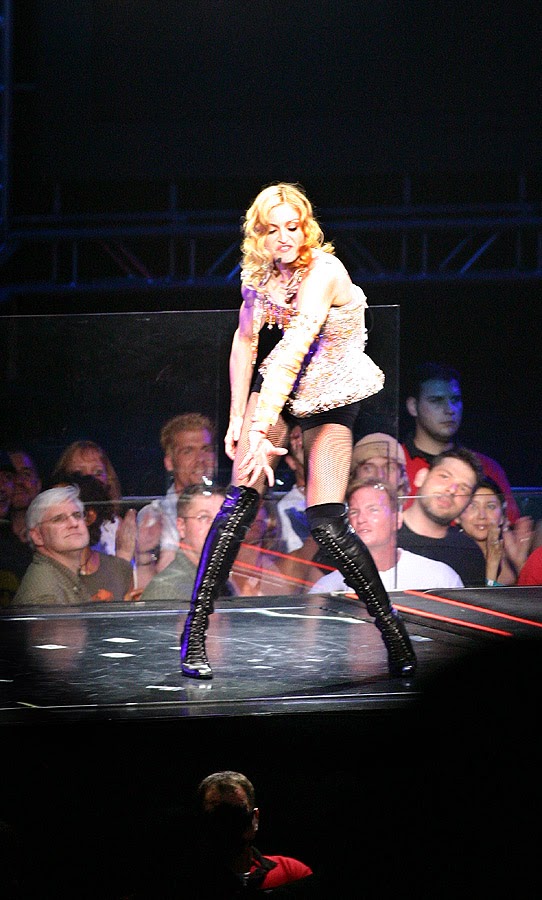 To this day I'm certain that Madonna lip-synced the whole show, and I'm not sure that many of her fans would have been disappointed if it were true. Actually singing seemed beside the point, since a show like this has less to do with musical excellence demonstrated than merely bearing witness to the presence of celebrity.

Looking at it that way, I wasn't really doing concert photography but something else entirely. My milestone - or chalk line, depending on how you looked at it - remained intact, and I was engaged in some whole new sort of photography; one that I couldn't have imagined nearly twenty years previous.