IF YOU WANT TO SHOOT LANDSCAPE PHOTOGRAPHS it helps to have access to a landscape. Sometime in the late '80s my sister and her husband moved north of the city to Caledon, a rural area full of farms and forest that was already developing a posh reputation. They scored a deal, though, with a run-down bungalow next to the Bruce Trail, at the elbow where two roads met, tucked into a little pocket of woods.

I'd bring a camera along on my visits and try to take shots of the trees and fields and wildlife we'd pass in their car. I was - and remain - a city kid, so nature in any form is a strange place, whatever form it takes. But I knew that landscape photography was a major genre and I wanted to see what I could produce now that I had landscapes in front of me. 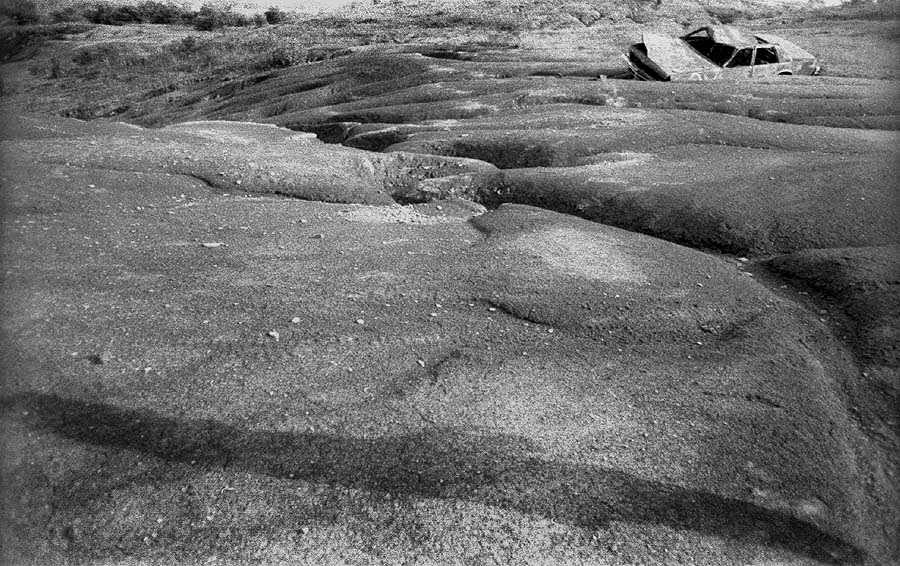 Thankfully Caledon and its environs, pawed over by man for a few generations, had a few attractions that weren't merely pastoral. The Cheltenham Badlands aren't a natural feature - these rolling hillocks of red clay happened when someone cleared away the trees and brush, exposing the earth beneath to erode in the wind and rain. They became a tourist attraction and the backdrop for countless photographers, and I can't think of another place for a thousand miles that looks so lunar. (Or more specifically, Martian.)

The province would end up buying the land over a decade later, but in the '80s it was still the sort of place where you'd ditch your old Chevy (I'm thinking mid-'70s Nova, or Caprice) and set it on fire. The car is gone now, and there's talk of restricting access to the site to prevent all those feet from speeding up what some farmer started in the '30s.

I have never printed these photos until now. I'm rather surprised at how well they turned out, over twenty-five years later, and particularly enjoy the glimpse of the adjacent building through the window in the shot below - an echo of the castle on the hill glimpsed through arched windows in late medieval paintings. The Brickworks are completely closed up and inaccessible now, apparently, much to the frustration of younger photographers I know; sometimes it just pays to be old and in the right place first, I guess.