AFTER THE IMPROBABLE FEAT OF RE-FORMING AFTER 20 YEARS, the Replacements have been getting a lot of press lately, which is a bit rich for those of us who loved the band back in the '80s and wondered why the hell nobody else did. My single (I assumed) experience shooting the Replacements in their heyday was a frustrating, chaotic one, and since I never got the results I was hoping for, most of these shots have never seen the light of day until now.

Thanks to the efforts of fans and the wonder of the internet, I know exactly when these were shot: April 6, 1986, at the Concert Hall (aka The Masonic Temple) on Yonge Street, when the band were in town touring to support Tim. This would be the last tour Bob Stinson would do with the band; after playing on the demo tapes for Pleased To Meet Me later that summer, he either left or was kicked out of the band.

Ironically, my photo of Bob is the sharpest, best-composed one I shot on the afternoon when I tried to get portraits of the band during soundcheck. He's wearing a Damned t-shirt and the tattoo on his forearm reads "LUV HER." Stinson would be dead nine years after I took this shot; it's hard to believe that he's only 26 here.


I don't know if I was on assignment for Nerve or whether I was doing these shots for myself, but whatever hope I had of getting a decent group shot or portrait of individual band members became wishful thinking when I realized that they had no intention of posing together, and that anything I was going to get would be wrestled from four very wary, bored and possibly drunk young men. As I recalled to a friend last week when I was scanning these shots, it was like trying to catch ferrets in a tube.


Drummer Chris Mars couldn't even be bothered mugging, and apart from a few half-hearted gestures he slumped in the shadows, very nearly comatose. I'd owned a camera for barely a year when I took these photos, and I was working at the very edge of my competence. The set-up was basic - a Spotmatic shooting Tri-X; I'm guessing I pushed the film, and the spottiness of the photo above gives you a hint of how thin this negative was, and how much work I've done to make it even faintly readable.


If I couldn't get a shot of the whole band together, I knew I wasn't going to leave until I had a worthwhile shot of Paul Westerberg, This is one of just four frames I snatched of him, and the only one where he doesn't look like he's posing for a Creem magazine Boy Howdy! beer profile. It's far from ideal - his face is just slightly out of focus, but it's sharp enough that I'd take it out of its negative sleeve every few years and try to pull a decent print from it.

Eight years after I took these photos I got a call from Julie Clair at Rolling Stone Press, looking for photos to illustrate a book project that I assume was either (probably) The New Rolling Stone Encyclopedia of Rock and Roll or (shudder) Rolling Stone's Alt-Rock-A-Rama. According the the big ledger, I sent them eight prints on spec of everyone from Metallica and R.E.M. to Henry Rollins, Fela Kuti and Ice Cube.

They were looking for a picture of Westerberg - a solo artist now, having broken up the band in 1991  - and it seemed as good a time as any to try and get someone to publish my photo. I was getting heavily into printing through tissues and filters, so I pulled out the negative again, spent a couple of hours in my horrid little darkroom, and eventually sent them this: 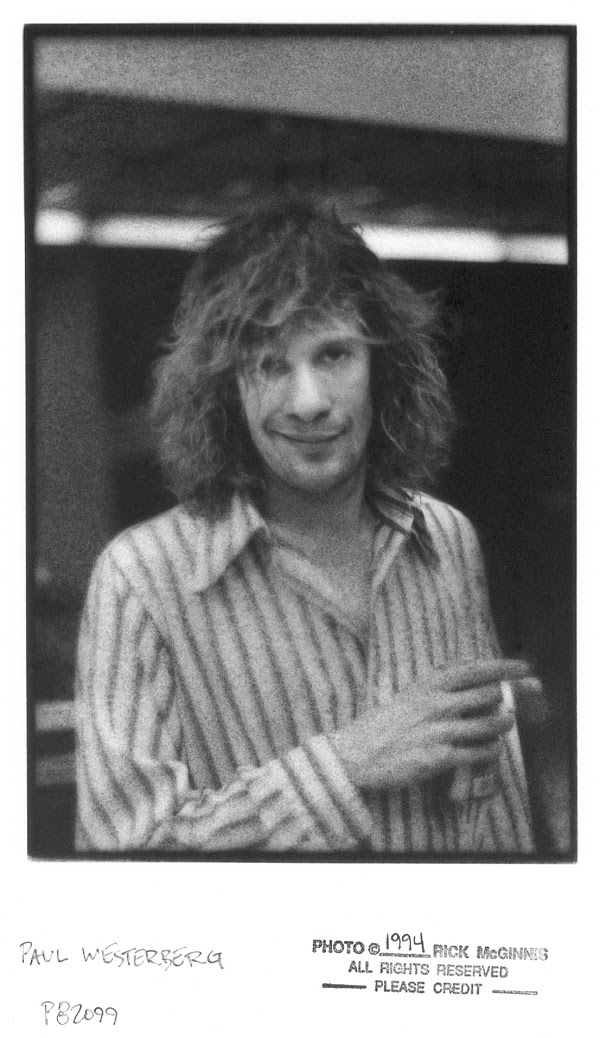 I think I was trying to make the sloppy snapshot quality of the whole shoot a virtue by distressing the image so that it looked like something you'd pull out of a waterlogged cabin or a dead man's storage locker. Not entirely successful, and in any case I have no record that this or any of my photos ended up in the Rolling Stone Alt-Encycloped-O-Rock-A-Rama.

Nearly thirty years later, I prefer the unfiltered version, and while my photos of The Replacements are hardly definitive, they sum up a bleary, slipshod afternoon that would end later that day with me in the mosh pit while the band stopped and started through a typically half-assed set full of fragments of covers and audience baiting. Which is probably why, great as they were, the Replacements were always doomed to a sort of noble obscurity. And why, if you've only ever seen the cleaned-up, reformed revision, you have no idea.


THE REPLACEMENTS RETURNED TO THE SAME VENUE five years later, on a tour supporting All Shook Down, their last album before breaking up, and I was sent to shoot the show for NOW magazine, apparently.

I say "apparently" because until I happened upon these negatives while looking for something else - after I'd written the post above - I had no memory of seeing them again.

I used my Nikon F3 - a huge upgrade from the Spotmatic - and shot two rolls of Kodak T-Max 3200, a high-speed black and white film, which I eventually stopped using for concerts because it produced such blocky, blown-out highlights. Of 70 frames - every one of Westerberg - this was the most successful to scan. (T-Max 3200 was, however, a great film to use for portrait work in flat, low-light conditions, for precisely the reason Kodak warned photographers about it - monstrous, chunky grain.)

Bob Stinson and Chris Mars were both gone by this point, and (as far as I can tell from the tape of the show) the band played a cover-free set full of fan favorites, with Westerberg bantering brightly with the audience. They had pacing they wholly lacked five years previous, and finished the show with a four-song crescendo, beginning with "Bastards of Young" and ending with "Alex Chilton." It was, everyone knew, their farewell tour, and I guess they wanted to go out on a high note.

A much better band, by objective standards, than the one that I'd spent half a day with in 1986, but I remembered that shambolic mess of a show and completely forgot the much better one. Hell, I can't even tell you if I bothered staying for five minutes after I finished my roll.
Posted by rick mcginnis at 7:00 AM