BY THE MID-NINETIES, I WASN'T LEAVING THE HOUSE MUCH IF I DIDN'T HAVE TO. I had an ambition - probably easier to achieve today than twenty years ago - to stay inside from the moment the first snow fell till the beginning of spring. If I could get all of my subjects to come to me, as well as arranging for all of my necessary supplies - film and chemicals, laundry, food - to be delivered, all I'd need to do was have colour film couriered to and from the lab, and prints delivered to my clients.

It would have cost a fortune, which is probably the main reason I never carried it through. It certainly wasn't for lack of desire on my part; today, of course, with digital photography, Amazon, eBay and competing grocery delivery services keeping delivery charges low, I think I might have tried to give it a shot. It's just a shame nobody makes money taking photos any more.


This is a long way of explaining why, starting in the middle of the decade, I began shooting still lifes in my Parkdale studio. It began as a technical exercise - an attempt to figure out high-key tabletop shooting, the sort of thing any competent catalog photographer could do with just a few minutes' set-up. But there was also a nagging worry that the market was shrinking, and that I was relying too heavily on my NOW assignments. I needed to branch out and find new markets.

There were a lot of cooking and lifestyle magazines on the newsstands. I noticed this because, besides spending most of my days reading, I was teaching myself how to cook. I had become what we now call a "foodie" years earlier with my first girlfriend, and instead of spending money in restaurants, I wanted to learn how to make really good food at home, if only so I could avoid leaving the house to socialize and convince my friends to come to me.


And so I bought a piece of milk-white opaque plexiglass and set up a simple backlit tabletop to shoot the ingredients I had in the kitchen. I began with more obviously sculptural items - a Savoy cabbage and some leeks, a pomegranate and a persimmon (though I still haven't really figured out what to do with a persimmon, even today.) A while later I turned my attention to ingredients I was using all the time, like garlic and ginger and summer melons. 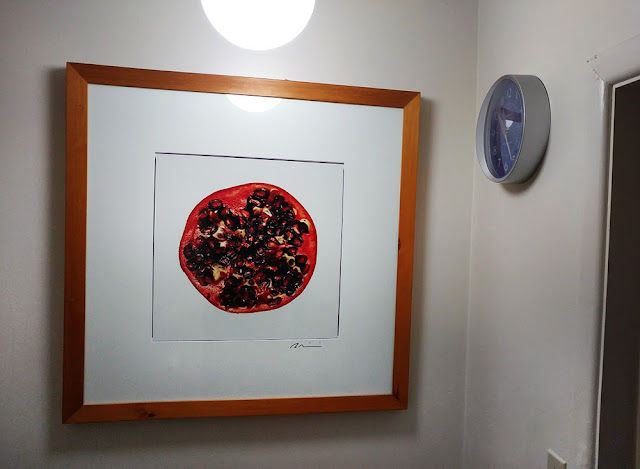 I was pleased enough with all of this work to make fruit and veg still lifes the subject of my first (and only) solo photo show, at an uptown restaurant that's still in business today. It was not a success; despite several phone calls from diners who either wanted me to mark down my (very reasonable) prices ("What if you made a smaller one? Would that cost less?"), I only sold one framed print - to the chef/owner. I'd end up selling another to a friend years later, but the rest have ended up on the walls of our home.


Despite this setback, I was proud of my still life work, and can only blame my own woeful inability to market and publicize myself for not using it to get more work, back in the last moments of the last boom time of magazine publishing. I'd keep doing still life work in my studio - more about that later - and occasionally take over the kitchen table when everyone's at work or school to see what I can do today.

Finally, I should mention that all of these shots were shot with cross-processed slide film. After years of experimenting, I had finally found a way to control the results and produce negatives with the contrast and colour I'd been trying to get for a decade. This little-seen work is probably the technical zenith of my work as a studio photographer. They are also available for very reasonable prices for framing and hanging.