THE ACTRESS SARAH POLLEY WAS JUST EIGHTEEN when I photographed her in my Parkdale studio for the cover of NOW magazine. She was, notwithstanding, a celebrity in Canada, having been a child actress for years before I got the assignment to take her portrait for the cover of the magazine's film festival issue. (She had a prominent role in Terry Gilliam's The Adventures of Baron Munchausen, and was at the festival promoting Atom Egoyan's The Sweet Hereafter, The Hanging Garden and The Planet of Junior Brown, I think.)

She was tiny, very pretty, and a bit nervous, despite her long experience. I was in the throes of my "Victorian studio photographer" period and managed to rent a suitable backdrop for the shoot, the sort of painted scenery you'd find in the studio of someone who shot carte de visites for middle class customers in any city.

I'd borrowed a few other props, including an old Mitchell cinema camera, hoping to get something that played with the film festival theme. I was clearly ambitious that this session turn out well, as I shot a lot of film. 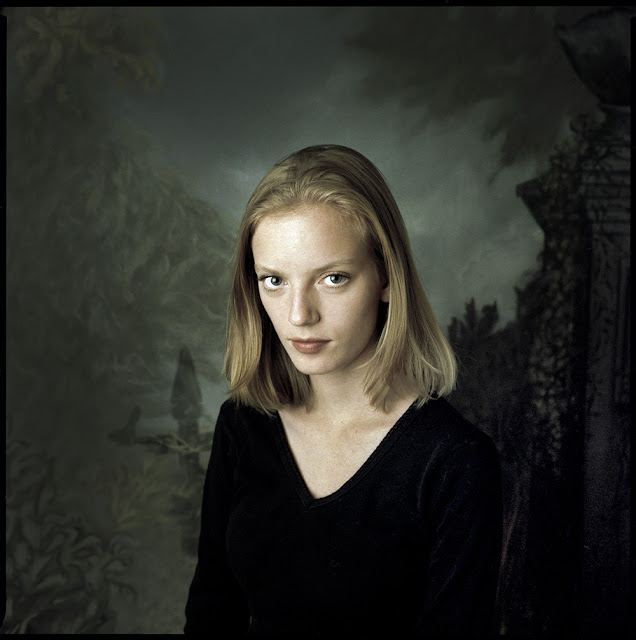 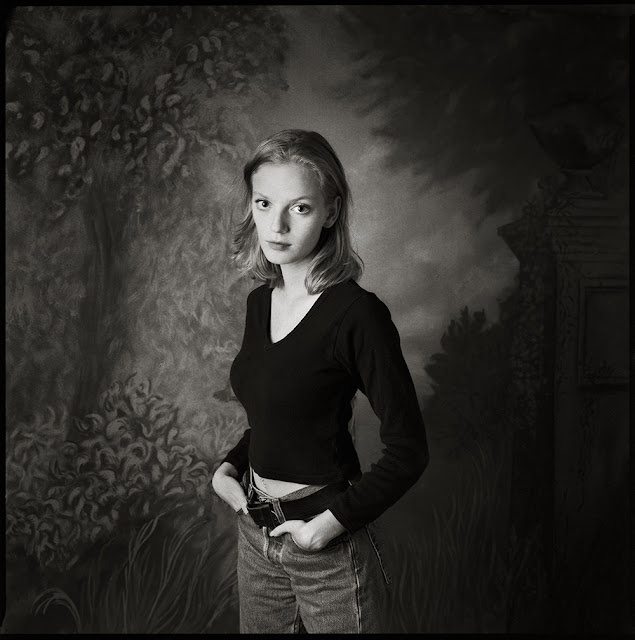 My ambition got the better of me at the time, because the shoot never really seemed to measure up to my hopes for it. Still, when Vogue magazine in New York did a small feature on Polley, she apparently declined to do a shoot for them and told them to use my photos, so it couldn't have been a complete failure. Getting a shot in Vogue felt like a big deal, but if it was, I never did much to capitalize on the credit.

I like these shots a bit more today, probably because experience has given me the tools to print them a bit more as I imagined them. I especially like the shot of Polley in her orange jacket, looking a bit wary and hostile - a frame I would definitely have overlooked back then.

They were the kind of studio portraiture I was desperate to do much more often, but this shoot with Sarah Polley was probably the last time I had anyone really notable in my studio. Less than two years later I'd end up moving out of my Parkdale loft.


I was a little let down with the rolls I shot with Polley amidst my studio detritus and the borrowed Mitchell camera, but this frame in particular struck me while I was going over my contacts, mostly because of something Polley wrote for the New York Times recently, in the wake of the Harvey Weinstein scandal.

Barely two years after I took these photos, Polley's career had taken off in the U.S. and she found herself working on a Miramax film and called in to a meeting with Weinstein that played out, depressingly, much as any meeting a young actress would have with Weinstein. She wasn't quite twenty, had a publicist with her the whole time, and turned down his "offer." By this point Polley already had ambitions away from acting toward directing, and according to the Times piece, this incident played no small part in her later decision to make her career more in Canada than Hollywood:


Harvey Weinstein may be the central-casting version of a Hollywood predator, but he was just one festering pustule in a diseased industry. The only thing that shocked most people in the film industry about the Harvey Weinstein story was that suddenly, for some reason, people seemed to care. That knowledge alone allowed a lot of us to breathe for the first time in ages.


I'd end up photographing Polley one more time, eight years later, when she was at the film festival doing press for a Wim Wenders film in which she had a role. It was in the middle of the "hotel room" period at the free national daily, and while I'm sure I must have mentioned the NOW shoot, I don't recall if she remembered it at all. I positioned her in front of a window with the light behind me and shot a couple of dozen very, very tight frames.

A year later Polley would release her second feature as a director, Away From Her. In the Times piece she says she hasn't taken an acting job in ten years. (Her last credit is Abigail Adams in the HBO miniseries John Adams.) She recently directed a film about her discovery of her birth father, and has written and produced a TV miniseries based on Margaret Atwood's Alias Grace.

Polley has, I think, done well with her decision to move away from acting and Hollywood, but I can't help but wonder what she might have done with the roles and resources available south of the border, in an industry (almost impossible to imagine, unfortunately) without its Weinsteins.