CROSSING THE CANADIAN ROCKIES FOR THE FIRST TIME was probably a bigger deal than it should have been. Nonetheless, I was over fifty when I finally managed it earlier this month, on a travel junket to take the Rocky Mountaineer luxury train from Vancouver to Banff. It's a trip that it seems most Canadian have wanted to take, and I was lucky to do it for work.

I love trains. They're the perfect balance between a car and a plane - you get to cover distances and see the sights while someone else does the driving and navigating. Taking a train with a gourmet kitchen and a glass-domed roof enhances this comparative advantage, of course, and it goes without saying that I took a lot of pictures. 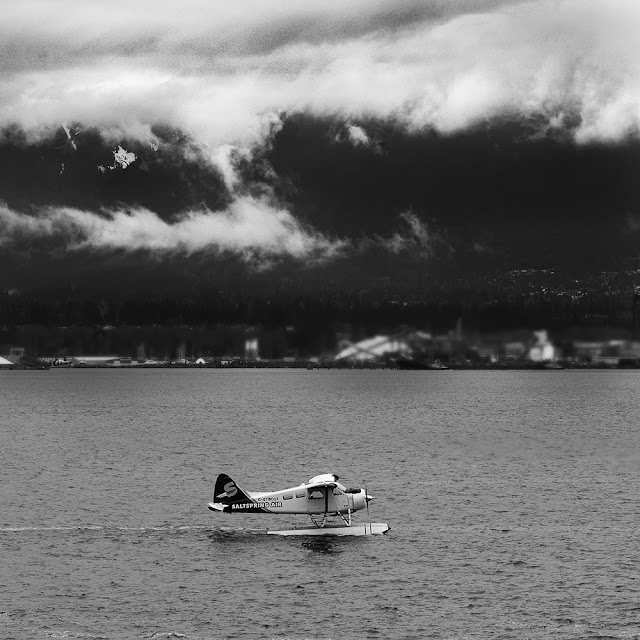 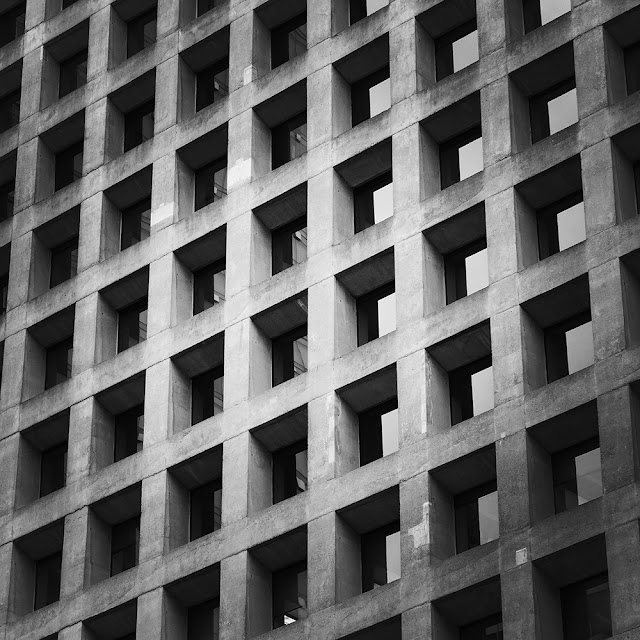 As a city, Vancouver is often described by Canadians as the anti-Toronto - coastal and laid-back instead of lakeside and work-obsessed. That might have been true at one point, but both cities have been experiencing real estate booms for so long that their differences have been minimized; making the money to afford to live there has become enough of a common endeavor that I imagine Vancouverites need to get a glimpse of the mountains every now and then to remember where they are.

I didn't get to see a lot of the town apart from a couple of walks down to the water from my hotel, but my travel media status did get me out onto the roof of the Fairmont Hotel Vancouver to photograph the skyline from behind the magnificent carved gargoyles that have been brooding over the town for over seventy years.


If you've read this blog regularly, you'll know that I got my start as a photographer thanks to Nerve magazine, a ragged little music monthly published by the couple I usually referred to as the aggregate "Dave and Nancy." The end of Dave and Nancy also meant the end of Nerve, and Nancy eventually made her way to Vancouver. I hadn't seen her for years so when I knew I'd be passing through town I had to get together with her again.

While I feel older, grayer and fatter, Nancy didn't seem to have changed at all - still lovely, and full of the same enthusiasm and curiosity that have always made her so charming. We met in the hotel lobby and drank beer on the patio of the Vancouver Art Gallery next door, where I took a quick portrait of Nancy amidst the columns and umbrellas.


An afternoon free also gave me a chance to meet someone whose work has been inspiring not only to my photography but to this blog in particular. When I started scanning my old photos and putting them online almost three years ago, Alex Waterhouse-Hayward's long-running website was the best model for this kind of thing I'd ever seen, so I had to ask if he had an hour or two free when I passed through his (adopted) hometown.

Alex began working as a professional over a decade before I did, and got to experience ten more years of what was probably editorial photography's last golden era. We talked about that, among other things, at his home in Kitsilano, where he and his wife Rosemary were kind enough to invite me for coffee and pastry. At the end of my visit he took me out to his studio, where I asked him if he'd sit for a quick portrait; I shot him looking back through the door of his shooting space to the filing cabinets where he keeps his work meticulously archived. 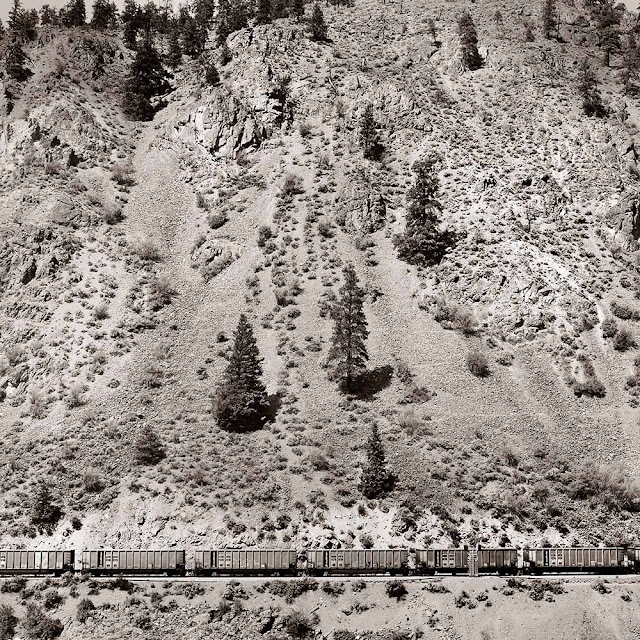 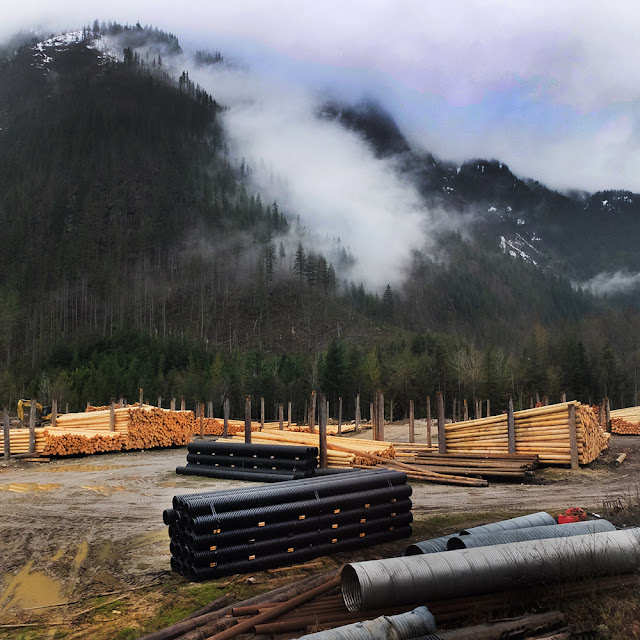 Shooting from a moving train requires a steep learning curve; a steady hand isn't as important as timing - getting your camera out and ready when a new vista sweeps into view, and keeping one eye open for the break in the trees to get an unobstructed frame. There was a lot to shoot, and I had to suppress my street photographer's aversion to the scenic with the justification that I rarely get to photograph anything really spectacular, so it was time to relax into the picture postcard majesty of it all.


I felt much more at home in the Kamloops railyard where the Rocky Mountaineer services their trains - a step off the beaten tourist path that I'd requested to see as part of my story on the effort and logistics that go into a luxury train. We also made a quick trip to Lake Louise after reaching Banff - one of the most iconic locations in Canada, and one that I perversely responded to with this photo of a stone wall buried in late winter snow. 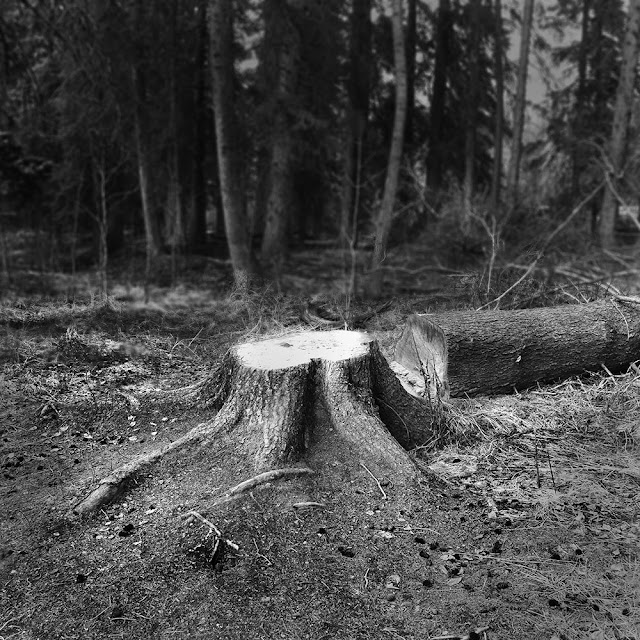 After two days on a crowded train I had an urge to escape crowds, so with an afternoon free I took a short hike on the Fenland Trail just outside Banff. Our host in the town helpfully told me that the recent grizzly warning for the trail had been taken down, so I got to enjoy the crisp, pine-scented air with only the slightest terror of predatory wildlife. We ended the evening of our final day in the mountains overlooking the town; I shot some scenic vistas, to be sure, but inevitably my eye was drawn to something a bit more man-made.

Posted by rick mcginnis at 7:40 AM