SOMETIMES I FEEL LIKE I WAS BORN TWENTY YEARS TOO LATE. The rest of the time it's more like forty years. I've probably felt like this since I was quite young, but by the time I took this portrait of Gena Rowlands at the film festival in the mid-'90s, this regret was a condition of my life.

I posted one of these photos before - a scan of one of the few finished prints I've retained in my files, discovered when I was making the first excavation of my long-ignored archives when I started this blog. As I wrote at the time, I didn't have much recollection of this shoot in particular, but scanning my old negatives now, it seems that the film festival of 1996 was an unusually productive one, where I shot Gena Rowlands alongside Kristin Scott Thomas, Mike Leigh, Katrin Cartlidge and Stanley Tucci. A pretty good week's work, and probably my best that year. 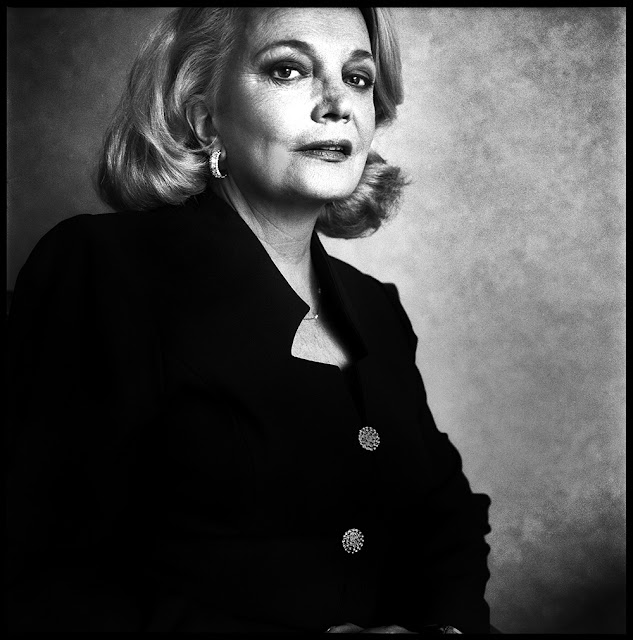 By the mid-'90s I had a standard working method outside the studio - a small, light Manfrotto tripod with a ball head and a little Pelikan case containing two Rolleiflex cameras, a Sekonic light meter, close up filters, a cable release, lens hoods and two boxes of film. As long as the sun was shining and there was a window to pose the subject by, I knew I could get something.

It was a kit that whose technology hadn't changed much in forty years, and while there were some immense changes about to overwhelm photography, both creatively and economically, this was the last moment of an era. Which is probably why I started dressing for shoots in a suit jacket and cuffed trousers; I even had a fedora and a pork pie hat. Since I was working no differently than someone doing the same job in 1952 or 1965, I figured I'd dress the part. It was also, as I noted in an earlier post, a kind of armour - a uniform for a professional, there to do his job.


I'm especially reminded of this with the Rowlands shoot - obviously done for a potential NOW cover, as I shot cross-processed colour as well as black and white. Rowlands, while associated mostly with her late husband John Cassavetes and his very improvised, emotionally fraught and low-budget films, actually began her career in the waning days of the studio system, and arrived in front of my camera redolent of the sort of glamour that was rare by then, and virtually extinct now.

Rowlands had a cool, even icy beauty, and didn't lose it as she aged. Even as a young woman she never seemed like an ingenue; alongside a contemporary like Joanne Woodward she was a woman, never a girl, and brought  a frightening intensity to her husband's films such as A Woman Under The Influence, easily holding her own in the frame alongside Cassavetes and his leading men - Peter Falk, Ben Gazzara and Seymour Cassel - and often blowing them away.

I must have found a very sweet spot of light when I shot Rowlands at the film fest, because it looks almost like a studio shot, right down to the patterned wall behind her. I would have given almost anything to have worked when someone like Rowlands ended up in front of my camera every week, instead of once a decade. But I missed that world by a scant decade or two.

Posted by rick mcginnis at 7:57 AM