ELLEN BURSTYN'S CAREER BEGAN IN TV IN THE LATE '50S but it wasn't until the early '70s and the "Raging Bulls" era of Hollywood that she became a star. She had major supporting roles in films like The Last Picture Show and The King of Marvin Gardens before getting an Oscar nomination for The Exorcist and winning for Alice Doesn't Live Here Anymore.

Just typing the names of those pictures sends me back to the early '70s, when they were the sorts of movies people talked about before bowdlerized versions might make it to TV years later, where they'd play in the late evening slot when kids were supposed to be in bed. They were very adult films, and Burstyn was a very adult actress, playing moms, widows and former beauty queens losing their grip. 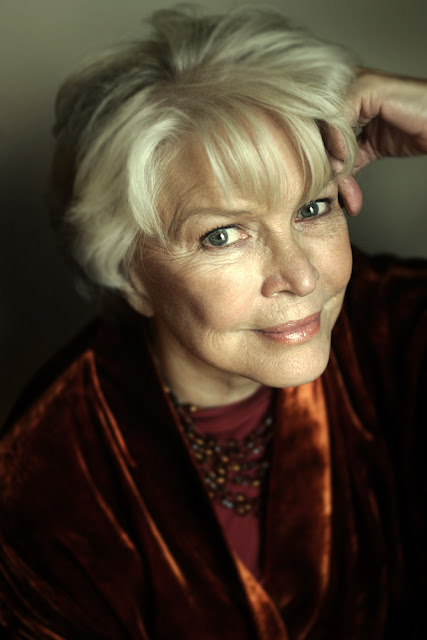 I photographed Burstyn twice, exactly a year apart, at the film festival. I'm not sure what she was promoting the first time; she had roles in four films in 2006, including Darren Aranofsky's The Fountain and the (now-)camp classic remake of The Wicker Man. I'm certain, however, that she was in Toronto doing press for a movie version of Margaret Laurence's novel The Stone Angel in 2007.

For both shoots, I focused on Burstyn making a gesture - running her hand through her hair the first time, then putting her chin in her hand the following year. I'm sure the 2006 shoot was at the old Four Seasons in Yorkville, while the following year's photos were shot around the corner at the Intercontinental.

I've had very few brushes with Golden Age Hollywood apart from my strange afternoon with Mickey Rooney back in the '90s, so actors like Burstyn are the closest I've come, and it's hard to deny that she brings very palpable presence to these photos. The light is much better the second time around, and my camera more direct in its address of Burstyn, so they have an intensity that the first shots lack.

It was shoots like this that got me to slowly realize that, while I might have missed the chance to shoot a lot of major personalities in their prime, there was something rewarding about capturing them later, when they have earned the ability to look down a lens with candour.