THERE'S AN OLD SHOWBIZ SAYING THAT YOU SHOULD BE NICE TO THE PEOPLE YOU MEET going up because you'll meet them again going down. The variation that applies to celebrity portraitists like myself, working below the rarified pinnacle of the trade, is that you'll only get access to people on their way up or down - almost never at that white-hot glossy magazine cover top.

I photographed Hilary Swank, two-time Oscar winner, just as her career had begun in earnest, at the film festival promoting Boys Don't Cry, a film where she played a young woman passing as a young man. She'd been in a holding pattern in Hollywood for a few years, doing TV roles and parts in movies like The Next Karate Kid, and had her character on Beverly Hills 90210 written out of the show - a setback that, serendipitously, allowed her to audition for the part that would win Swank her first Oscar. 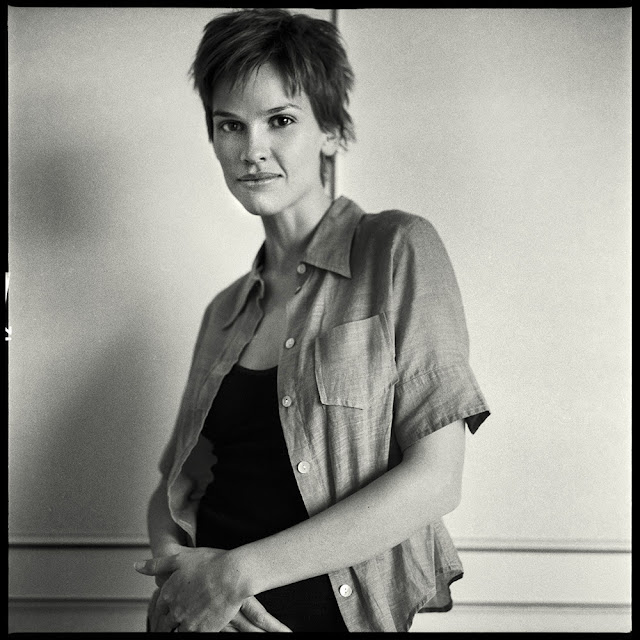 For some reason, we didn't have a hotel room for this shoot, so it was shot in a reception area on one of the meeting room floors of either the Four Seasons Yorkville or the Hotel Intercontinental nearby (I honestly can't remember which.) I have the vaguest memory of this being late in the festival, which explains why the busy hallways of the hotel had emptied out, and we had some privacy for the shoot despite its very public location.

What the spot lacked in privacy it made up for in light - a big bank of tall windows that filled the room with soft daylight. The shoot wasn't scheduled for a NOW cover, as I did it all on three rolls of black and white, but ended up being bumped up to one in the end, when the buzz for Boys Don't Cry and Swank continued to grow after the festival.


I began the shoot with Swank standing, wearing a linen shirt, but quickly asked her to take off the shirt and sit on the carpet. This was already more direction than I usually gave most subjects, but I pushed it even further by asking her to draw her legs up to her chest in a position that made her fit the square frame of my Rolleiflex better.

Swank had apparently lost a lot of weight to play Brandon Teena in Boys Don't Cry, and lived in male drag for a month to prepare for the part. She was clearly only starting to get that weight back when I photographed her, but the young woman I met was remarkably feminine - and very petite. Six months later she'd have been in the care of handlers and PR people and stylists who would have raised alarm bells when some nobody asked her to sit on the floor in a hotel hallway for a photo.