I WASN'T AT TALLADEGA FOR MORE THAN A DAY before I realized that, for many of the people there, the race wasn't the reason they came. There were thousands of people at the track, in the infield and on the campgrounds outside, and it didn't take long to do the sums and figure out how few of them would have a decent view of the track. Clearly, this was about something more than a car race.

It was then that I began taking portraits in earnest, walking up and down the Boulevard with my camera and my flexible reflector, stopping people whenever I thought they looked interesting. I knew that portraits were going to be a big part of my story, but knowing that these people were here mostly because they wanted each other's company for a weekend, I wanted to capture at least a tiny sliver of this ad hoc community.


The Boulevard was Main Street, where campers set up their little compounds with living rooms, bars, kitchens and even hot tubs and stripper poles to face each other. There was almost no point asking permission to take photos here because they'd come to Talladega to put themselves on display. 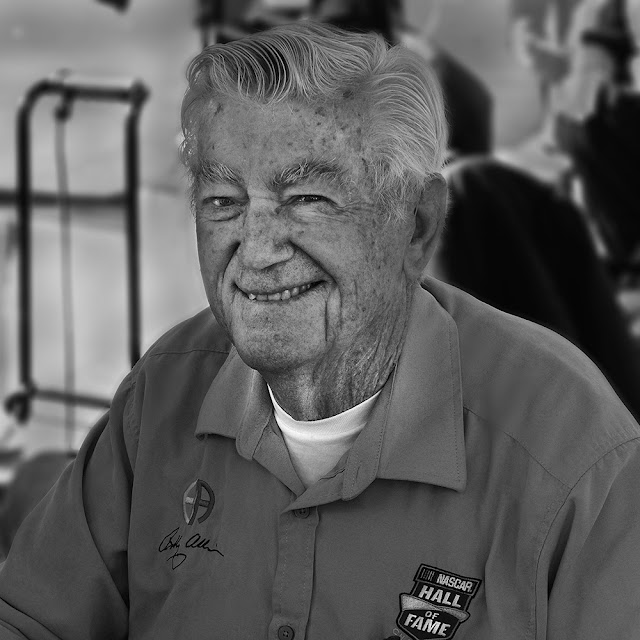 When I discovered Bobby and Donnie Allison doing autographs outside the driver's meeting on race day, I knew I had to try and get something like a portrait, even if it was a stolen few seconds before they got back to the task of putting their signatures on tickets, books, hats, shirts and model cars. I like NASCAR a lot, but my vague memories of it from my childhood are of a wilder, noisier, hairier time, and men like this were at their prime then.


The great attraction of photography for me is the constant challenge, where I'm forced to pivot from landscapes to street photography to still lifes and even sports shooting. Photography is my craft and my trade, but portraiture is something like a calling, and once I begin shooting portraits I don't want to stop.


There were so many great faces at Talladega, and thanks to the nature of the event and some quirk of southern hospitality, nobody turned me down when I asked to take their picture. If I didn't have another job to do and a race to shoot, I could have happily walked around all day with my little Fuji camera and my collapsible backdrop, collecting faces.


My last portraits of the weekend were of my neighbours in the exclusive little RV parking lot just by the start/finish straight. Ricky McGehee and the Craig brothers, Barry and Dennis, were real gentlemen, and I offered them the use of the rooftop deck of my rented tour bus to watch the race while I wandered back and forth around the track during the big race.

I shot these portraits and they asked me how I'd enjoyed myself. I said I'd had a ball, but it was my big disappointment that I'd never had a taste of moonshine. After all, if it wasn't for moonshine this whole huge spectacle wouldn't be here. They looked at each other and laughed and one of them pulled open his cooler and offered me a big cold jar of shine with peach slices swimming at the bottom.

And with that, my trip was perfect.