NOT LONG AFTER I BOUGHT MY FIRST CAMERA I began working for Nerve magazine - learning on the job as I took my Pentax Spotmatic with me to interviews and shows. At some point in the fall of 1985 Dave and Nancy asked me if I'd be interested in writing about a band that were getting some buzz - a cowpunk outfit made up of some local scene veterans called Blue Rodeo.

I have a lingering fondness for Blue Rodeo because they were one of the first bands I ever photographed live in concert. The frames below are from what is probably one of the first half dozen rolls of film I ever shot - stored on the second negative sleeve in the first binder or 35mm negatives on the shelf in my office. 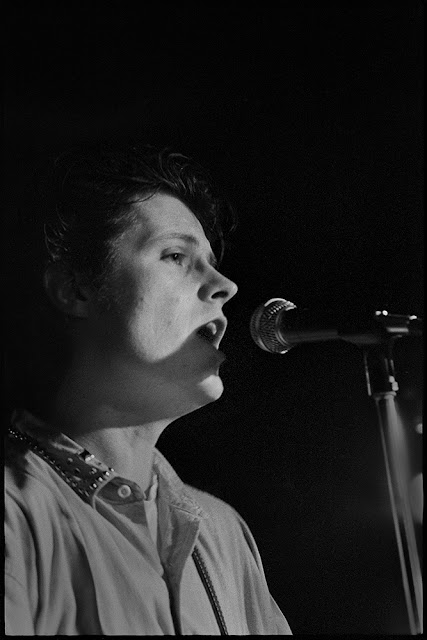 They're pretty primitive work. These shots of Jim Cuddy and Greg Keelor playing an early gig on Queen Street West are among the few on that roll that I'd call reasonably sharp, and I was probably grateful that they were exposed well enough to print. The composition is awful, as I was making the rookie mistake of hitting the shutter as soon as I knew that the face in the focusing circle in the middle of the viewfinder was sharp.

I like to think I got better. Blue Rodeo certainly did. Two years later they released their first album, which stalled briefly before the single "Try" became the cornerstone upon which they'd build a career as an iconic Canadian band, still together today over thirty years later.


Ten years after shooting them at the Bamboo I was assigned to photograph the band for NOW magazine at a downtown hotel where they were doing interviews for their new album. A few members had come and gone from the band at this point, with only songwriter/singers Cuddy and Keelor and bassist Bazil Donovan remaining from the band I'd shot a decade earlier. I don't know why keyboardist James Gray and pedal steel player Kim Deschamps weren't there when I took these photos, but this quartet - which includes drummer Glenn Milchem, who I knew from a half dozen other local bands - would be the core of the band up till today.

(I have a vague memory of shooting the band again before this, in a dim rehearsal space in the city's east end, but so far I haven't found a single trace of that shoot in my files.)

Irene Grainger, my photo editor at NOW, encouraged her photographers to experiment and provided us with ample space in the paper to do things like this - a triptych and a collage, at least one of which ended up in the paper as I didn't bother providing her with a standard single shot of the band. (I never bothered to shoot one, out of a combination of confidence and arrogance.)

These multiple frame assemblages were my way of solving the problem of taking a band photo where everyone looked engaged - no matter how bored or distracted, musicians would be more likely to respond to your camera if you were focused on them, and with a few frames to choose from, you could always put together a more satisfying group portrait from component parts. I'd end up applying it to portraits of actors and shoots in restaurants where I'd gotten bored of shooting the chef. 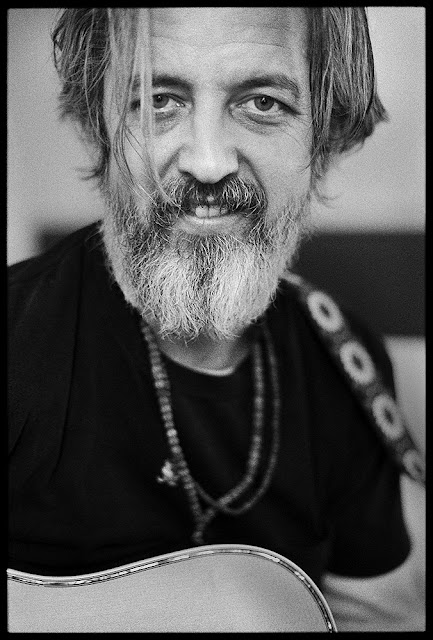 A couple of years later I was in another downtown hotel on assignment for NOW, shooting Greg Keelor for the release of his first solo album. He seemed a bit distracted, sitting on the edge of the hotel bed playing his guitar. I shot him there for a while and got some conventional portraits, then decided to try something a bit risky and asked him to stand up with the window behind him. It was a fuzzy kind of shoot and I wanted to capture a bit of that, and printed the shot with the light smeared and bleary around him.

It wasn't the sort of shot that NOW would run on its low-quality newsprint, so I was probably imagining it as more of a portfolio shot. I did end up bravely printing it for my go-see book, centered on a big black page, as an example of a more informal, documentary style of shooting - the sort of thing I imagined a creative art director might like to see. I never had a chance to test that out as there weren't many of those around at the time, but I still like the shot, and fondly remember Blue Rodeo as the band that was in front of my camera for my halting first shots and my later, restless experiments.