I WAS TERRIFIED ABOUT TAKING THESE PHOTOS. I'd had almost twenty years to think about Patti Smith and my mind had prepared several possible outcomes, most of which weren't happy. I left my apartment the morning of this shoot with half of my studio in the back of a cab, steeling myself for the worst outcomes. And it turned out I was completely wrong.

Patti Smith was just emerging from years of silence and had recently been widowed when her husband, Fred "Sonic" Smith of the MC5, had died of a heart attack. She'd been booked to appear at NXNE, the music festival that the weekly I worked for helped organize, so she was a natural for the cover, which I was assigned to shoot. It was a very big deal.


Back in the day, I was a much bigger fan of Television, the band led by her boyfriend Tom Verlaine, than the Patti Smith Group. I liked "Piss Factory" and "Gloria" and "Because the Night," but I didn't know how to read the whole poet/shamaness thing and often found myself put off by the ardour of some of her fans. (I avoided Dylan for the same reasons, and needed my wife to turn me around on him years later.)

I had a mental picture of Patti being very intense and self-obsessed - the whole New York art diva thing - and waited, bracing myself for this imagined persona in the hotel room of NOW's publisher, Michael, in the Toronto Hilton.

She arrived, very small and almost frail looking, smiling and shaking hands with everyone. I pointed to the chair I'd set up in front of my rented backdrop, next to the biggest soft box I had - the closest approximation of a big, cool window light I could create with my strobes. Patti sat down and turned to me.

"Okay, what do you want to do here? What's your idea?"

I stammered for a second and then said that I was very interested in Victorian portrait photography and Pictorialism, nervously name-dropping Nadar and Stieglitz and Clarence White.

"So you mean Julia Margaret Cameron and that sort of thing?"

Yeah, I said - exactly. Patti looked down for a second, as if she was making a decision, then looked up with a smile.

"Right," she said. "Great. You get it. You'll get more than I usually give most people."


From that moment on the shoot was as nearly perfect as any I've done. I didn't need to coax or describe, as we both had a common catalogue of photos in our heads, and Patti did her best to strike a balance between her own image - created many years ago in front of the camera of her friend and former lover Robert Mapplethorpe, principally - and those old portraits of Ellen Terry and Sarah Bernhardt that we both had in our minds.

I shot colour slide - both straight and cross-processed - and black and white. I did as many rolls as I thought she had the patience to sit for, and then put down my camera and thanked her. She stood up and took my hand with both of hers and thanked me back, then collected her bag and coat and said goodbye to Michael. For a moment, I stood there in the hotel room, ashamed of my trepidation of so many years. 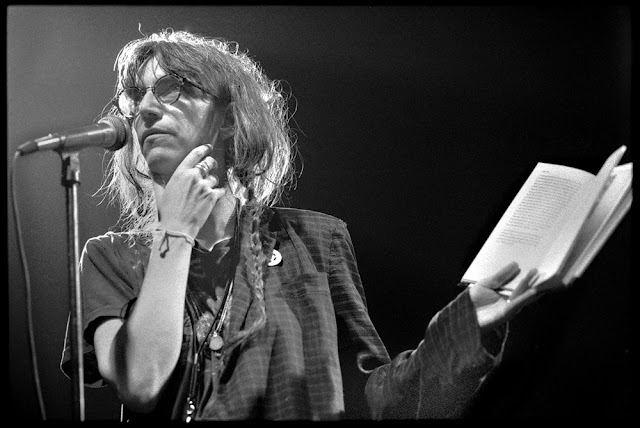 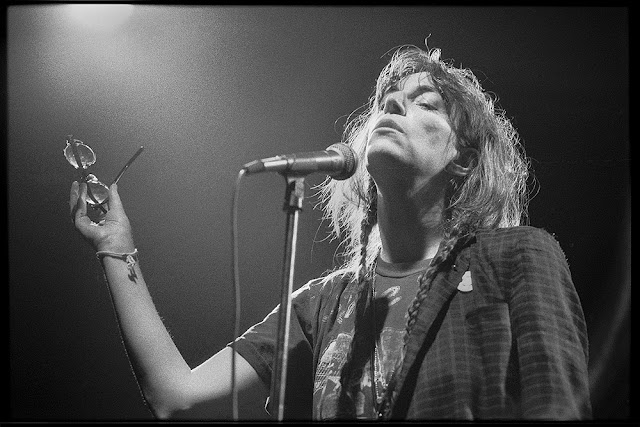 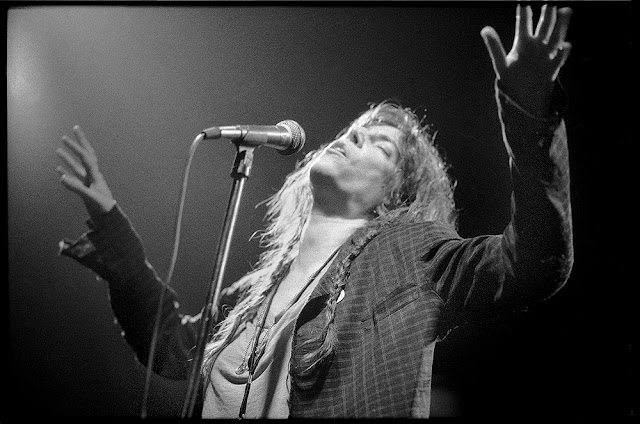 I brought my camera along to her show and took what I thought were some very good live shots, but it was the portraits that I sweated over. I had a very clear image in my head about what they should look like, but two things were letting me down. The first was the backdrop; I'd have preferred something darker or less mottled, but this was the closest thing they had in the rentals at Vistek, and my favorite backdrop - a canvas roll painted with clouds - was out.

The second problem was my own lack of skill in the darkroom. I worked hard to recreate the narrow focus and painterly effects that inspired me in the old photos Patti and I had talked about, but I was defeated by the sharpness of my lens and the brightness of my strobes. Stieglitz and Nadar and Cameron were working with view cameras, of course, and between their long lenses and slow film and the ability to tilt the focal plane, they could create effects that my modern equipment was designed to avoid.


I did my best with what I had and the cover story ran as scheduled. A few weeks later I got a call from Raymond Foye, a friend of Patti's and the publisher of Hanuman Books; he was helping organize her concert in Central Park and asked if they could pay to use one of my photos for a t-shirt to be sold at the event. Of course I said yes.

At around the same time I got a call from Patti; she was waiting to do a shoot with Bruce Weber but needed some publicity shots fast and asked if Arista, her record company, could pay to use mine in the meantime. Of course I said yes. I was, I had to admit, flattered to be Bruce Weber's placeholder.

(This turned into quite an ugly situation, through no fault of Patti's. I sent Arista the shots and an invoice, which they took months to pay. I began calling my contact there and was given the usual excuses until I informed them that, as per my usual terms laid out on the invoice, I'd be sending them updated invoices charging interest until I got the money I was owed. Cash flow was a constant problem for me.

The PR person at Arista called me on the phone and things got harsh. She expressed some outrage that I was even pressing the issue, and said that she had a lot of influence in New York and that I'd have a hard time getting work there if I kept making a stink. This might have scared me a few years previous, but by this point my dreams of a New York career were pretty nearly extinguished, so I laughed and said that for all the work I got from south of the border she could go ahead and knock herself out.

Patti called me again around this time about sending me some t-shirts, and asked how I was doing. I said I didn't want to bother her, but that there was this little problem with Arista and my invoice. She apologized sincerely and said she'd see what she could do. Not long after that I got my cheque.)

These photos of Patti have sat in my files for twenty years. I wanted to put one of them in my portfolio but was unable to achieve the effects I longed for until just recently. Thanks to a very nice new scanner and Photoshop this shoot finally feels like it's finished. I'm particularly fond of the black and white portrait, third down from the top. Thank you for your patience, Patti, and for being so much nicer than I ever could have imagined.