"WHAT DO YOU WANT ME TO DO? Do you want the hat on? The hat off? Just tell me what you want." I was standing on the roof of an abandoned factory with William S. Burroughs, who was being very gracious and pliant in front of my camera, though my only real instruction to him was little more than "Just stand there and be yourself!"

I remember begging Irene, the photo editor at NOW, to let me photographer Burroughs. Local director David Cronenberg was filming the unfilmable Naked Lunch in the old General Electric factory on Lansdowne and the book's author had been flown in for a press conference, where he'd talk up the project with Cronenberg and Peter Weller, who was playing Burroughs' onscreen alter ego.

Even if you were skeptical of the Beats, you'd have read a few Burroughs books back in the '70s and '80s, especially if you were a certain kind of nihilistic punk. His funereal stare and morbid image was a poor fit with the proto-hippie ecstatic poetics of his friends like Allen Ginsberg. Gun-toting and junk-shooting, Burroughs anticipated the hangover from hippie "liberation" in his books, which were grotesque and apocalyptic and very, very appealing to anyone who'd been unable to suppress a snicker while reading Howl.


I showed up at the Naked Lunch press conference still unsure about whether I'd get my five minutes to shoot Burroughs. Just to be safe, I shot three rolls of the man while he talked to the media, carefully framing to fit our restrictive cover format, but I was grateful when it was all over and I was told that I'd be able to get my portraits. Those three rolls were quickly forgotten, and there's no point scanning anything from them today.

I found a spot just outside the press conference room, overlooking the abandoned GE buildings, and shot a roll of cross-processed colour for the cover. Like most of my cross-processed work, it was done to bring out contrast and saturation, but when I scan them today, I find myself dialing back both in Photoshop. This was where Burroughs intoned the words above to me; if you know anything about the man, I'm sure you can hear them, droll and monotone, in your head. 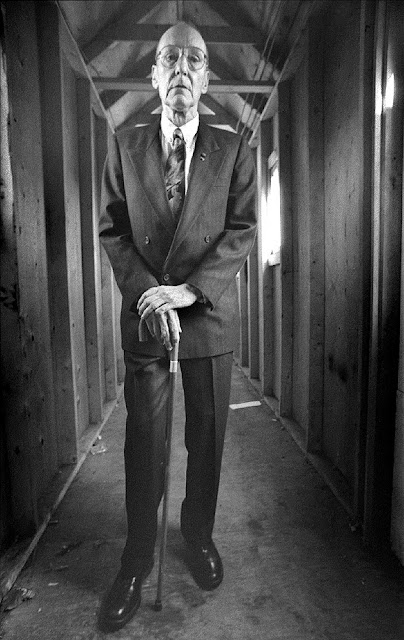 For the full-page inside portrait I'd found a walkway between two of the old factory buildings just nearby. I enjoyed taking the black and white shot that ran with the cover feature much more than the cover shot, for obvious reasons - no strict "head on the side, lots of blank space" formatting, and it ran full page most of the time, which was rare. After waiting for years to get a portrait of Burroughs, I knew this was my chance to get one good image.

Ultimately, I think I enjoyed Burroughs' saturnine personality more than his writing. Listening to him read his Dr. Benway stories, for instance, gave you more of a sense of their grim comic potential. In fact, after you'd heard Burroughs read once, his voice would cue up in your head whenever you opened one of his books. My friend Chris and I used to enjoy impersonating him while quoting back lines like "You've got to take a broooad, general view of things." I wanted to try and capture Burroughs whole image, so I tried to get as much of the man as I could into the frame.

I placed Burroughs in the middle of the walkway with the light from the small, irregularly placed windows on either side lighting him, then shot a whole roll of minor variations - moving closer, then farther away, crouching down, then shooting from slightly above him, all with my wide-angle lens. Like much of my work at the time, I was working from something I'd seen before - a famous portrait that I'd always loved:


Newman deliberately set out to take a sinister portrait of the German industrialist Alfred Krupp. The photographer was Jewish and Krupp had been a friend of Hitler's, making quite a lot of money from the Nazi militarization of the country. Even as a "fan," my feelings about Burroughs were always mixed; I liked his lack of sentimentality and the bleak, nihilistic tone of his work, but it was impossible to deny that this was the man who shot his wife in the head playing "William Tell" in Mexico, used family money to hire lawyers to stall the case, then skipped the country. Then he spent the rest of his career trying to explain away the killing as a sort of creative act that forced him to write.

Up close, I see the thin-lipped, cruel old lady's mouth, and cold grey eyes that survey you with an almost predatory appraisal. There was something infernal about the old man, and even through my youthful fandom I had an urge to capture it on film.

AN APPEAL: This blog is over a year old, and hard use has taken its toll on my old HP scanner, which now only produces clear scans on a narrow strip on the right margin of its glass. I'm on the market for a new scanner, but the only comparable replacement costs several hundred dollars beyond my budget, so I'm asking anyone who's enjoyed what I've been doing here - and wants to see more - if they can chip in and help. There's a PayPal button up near the top, and anything would be appreciated. Also, if you feel moved, please click on my Amazon.com links - a small percentage of anything you buy helps fund this blog. Thank you so much in advance.