IN FEBRUARY OF 2010 I FLEW TO A U.S. MILITARY BASE IN THE MOJAVE DESERT. A friend in the Canadian armed forces was organizing a press junket to Fort Irwin to cover the training of one of the last deployments of Canadian troops to Afghanistan and had an empty seat on the plane. On short notice and unaccredited, it was still an invitation I couldn't resist.

Seven years earlier I had obtained an application to the Canadian War Artists program; I had been fascinated by official war artists and their work for years, and wanted to see if I could contribute to the incredible work that had been done by people like Paul Nash, Charles Comfort and Alex Colville. But my wife was pregnant with our first child at the time and pointed out that it would have been the worst possible time for me to follow this distinctly inconvenient and even remotely dangerous dream.

This, I knew, was the closest I would ever get to my war artist fantasy, so I went to an army surplus store and bought a canteen and a scarf to keep out the dust, checked my gear and boarded a private government jet at a remote corner of Pearson Airport and flew south.


We landed at the Southern California Logistics Airport in Victorville, California. Formerly George Air Force Base, it was a shadowy facility next to blocks and blocks of abandoned military housing - a ghost suburb. At the edge of the runways we could see dozens of mothballed airplanes parked in the sun - an aircraft boneyard for commercial airlines. I was desperate to hike over and take some pictures but was told to stay put and wait for our ride.

We were a mixed crew - a reporter from a Toronto tabloid, another from a senior's publication, and a group of young women with a huge baggage train of flight cases - TV reporters from local affiliate stations all over Ontario who were their own cameraman for the assignment. One of them had cut her honeymoon short to make this junket. Their aggregate ambition dwarfed my own at even the most eager point in my career.

We were only on the road for a few minutes when we passed a sign saying that we were passing Barstow. I looked around and recited "We were somewhere around Barstow, on the edge of the desert, when the drugs began to take hold..." I hoped that someone would get the joke. 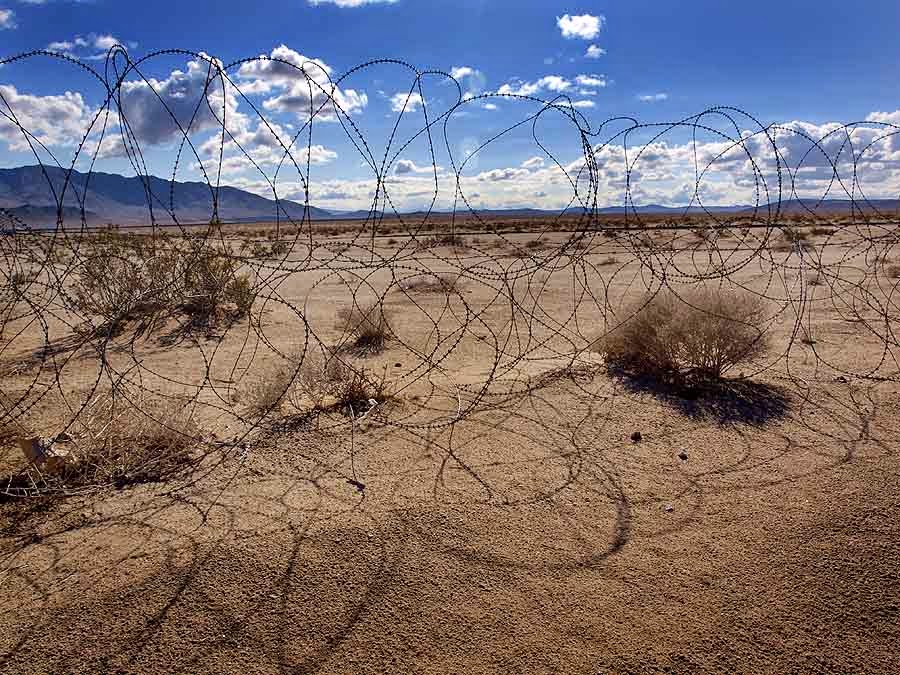 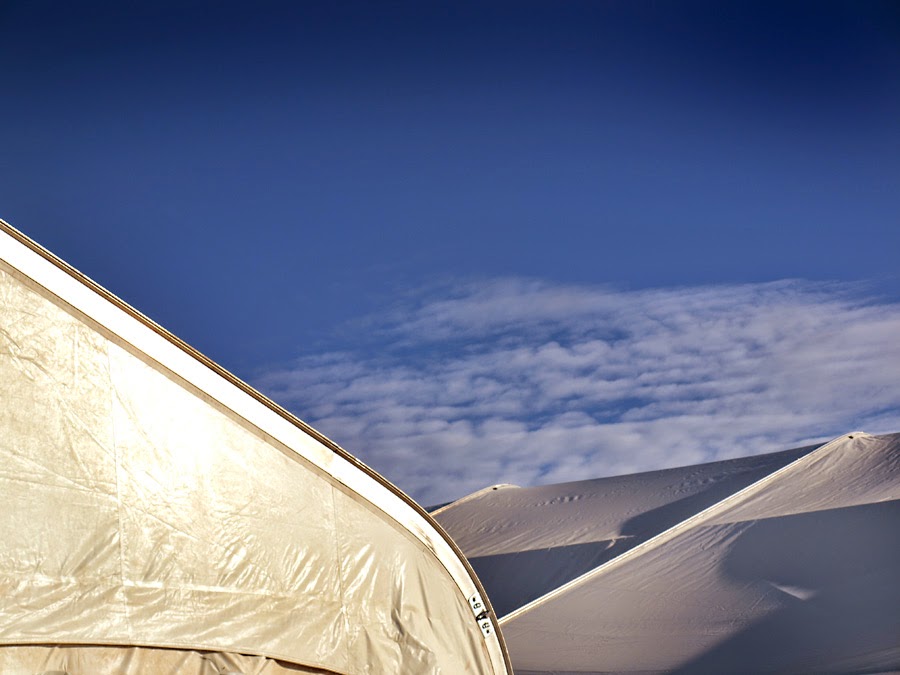 It was my first time in a desert and my first time on a military base, so I spent my first afternoon wandering around with my camera, trying to capture all the variations of sand and sky, with the odd bit of military detritus interpolated between the two.

For a photographer, the first few moments in a new place are almost like getting new gear, as you thrill to the novelty of different light and locations, and at a different latitude, get used to how shadows are cast by a sun that sits in a different place in the sky than your home. It's easy to see why some photographers become addicted to travel, and the constant challenges that refresh the basic circumstances of how you shoot. 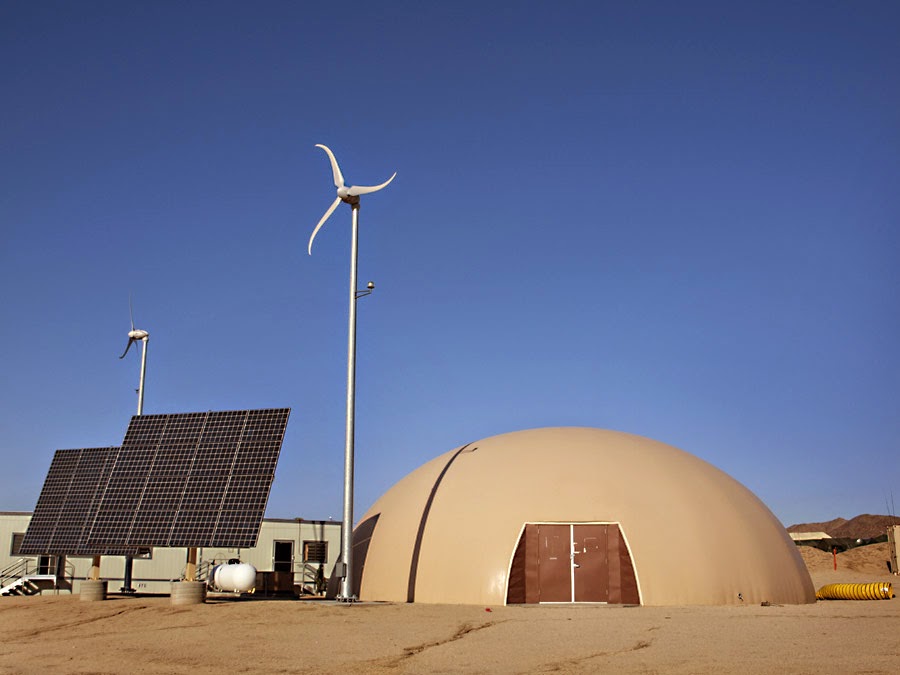 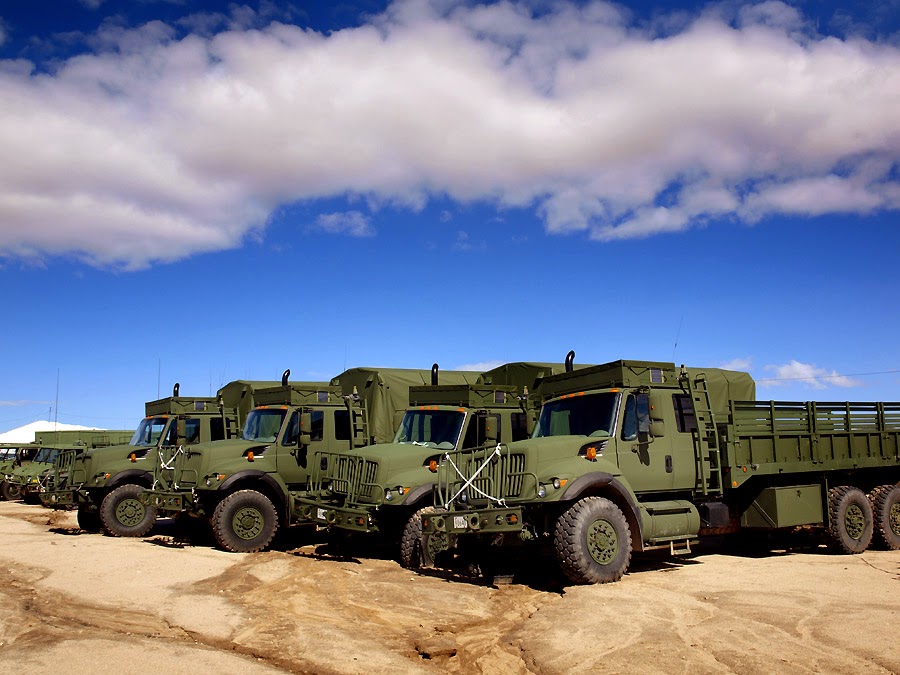 Military architecture is like nothing you'll find anywhere else; modernist dictums about form begetting function are taken to an extreme that would be considered unbearably stark in a civilian context. Even the roads have a brutal minimalism, with only a handful of vehicle types, painted in shades of one or two colours, varied only by how much the sun and use have faded them.

The "training villages" set up by the Americans were particularly graphic - collections of boxes and rectangles in concrete punched through with regular windows. Structures set aside to represent some sort of use - a market, a police station, a mosque - would be ornamented with a simple dome, a sign, or a handful of wooden stalls filled with scant piles of plastic fruit and vegetables. It was a cityscape drawn by a very neat child's hand, filled in with the odd bit of three-dimensional clip art.


For the first day or two you're put on edge by the fact that the only activity busying the hundreds of people around you are drills for war, fully accessorized with guns and trucks and armoured vehicles and the thrum of helicopters overhead. Dressed in civilian clothes, and by comparison only fitfully busy with the business of recording what you see, you begin to feel left out.

It doesn't take long to get used to being surrounded by men with guns, though, and you'd soon find it normal to pick your way through the mess hall stepping over C7 rifles placed on the ground just behind soldiers at their tables. Settling down for the night in a standard issue sleeping bag on an army cot wasn't the most comfortable sleep I've ever had and showering was a communal ritual done in cold dawn light. But the food wasn't bad, and despite dishes that were dubbed "roadkill" and "shit on a shingle," I think I actually gained weight at Fort Irwin.

Everyone at both the main camp and Forward Operating Base King - our simulated FOB closer to "enemy lines" - maintained a laconic demeanor at all times, but the single moment when a buzz ran through the camp was when a rumour began circulating that JTF2 troops, Canada's equivalent of U.S. Special Forces, were around. On a military base, even one engaged in simulated combat, there are garage bands and there are rock stars. 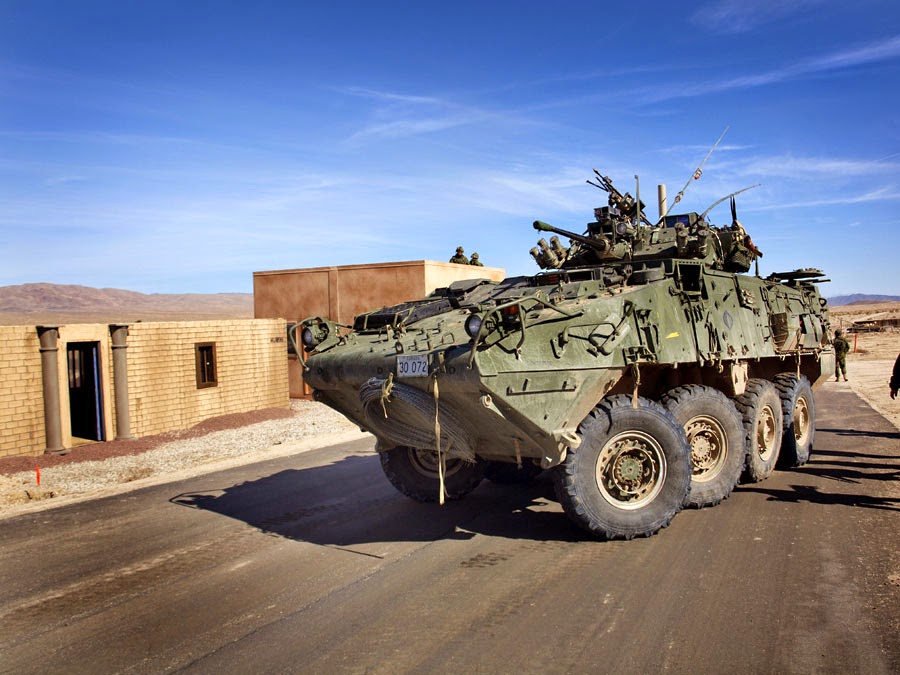 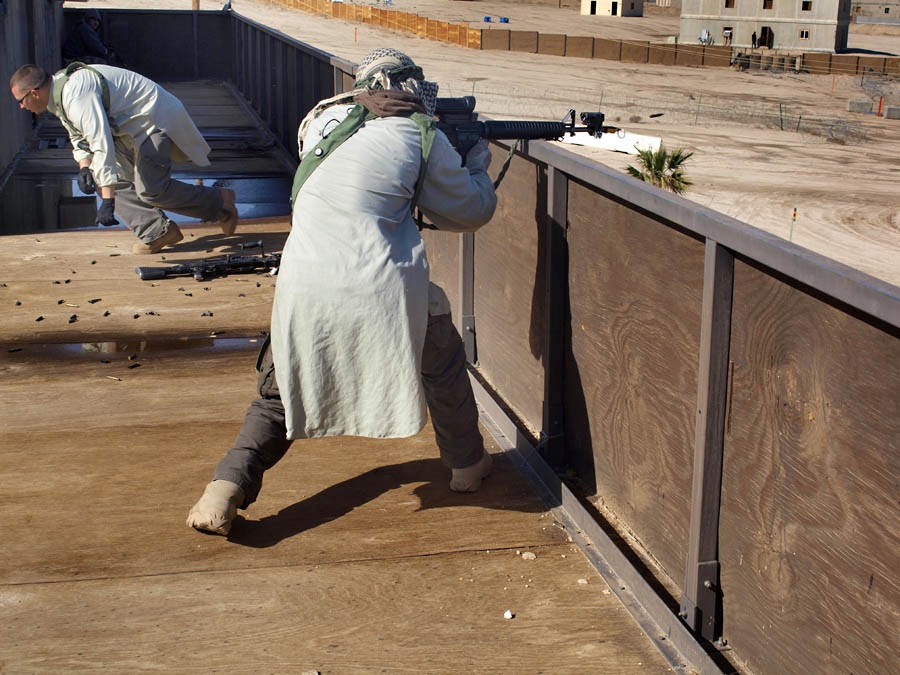 On our second day at FOB King we were kitted out with body armour, helmets and ballistic glasses, loaded into the back of a truck and driven out to one of the villages. We were placed on the corner of a second storey roof and allowed to watch a squadron of Canadians advance into the village behind a LAV III, right into an ambush led by "insurgents" hidden just a few feet away from us.

From our rather conspicuous perch we watched as the Canadians took "casualties," pulled back, counterattacked, then began a sweep of the village. At one moment it looked like real people playing out a video game; at others it looked like chaos.


After the firefight we were ushered into a courtyard where soldiers were holding a council with local elders and officials. They had to learn to use their scraps of Pashtu and the interpreters provided for them, and after it was done we were introduced to the "villagers" - mostly Afghans and Persians hired to play friends and possible foes while U.S. military took the roles that required weapons; police, Afghan military and insurgents. (Though with hindsight the difference has proved to be rather notional in real life.)

One of the men - an Afghan who had recently owned an electronics store in Los Angeles - showed me the shipping containers converted into little apartments where he and the other interpreters lived. He talked about wanting to help the Americans bring law and order back to his country, but talking to him I couldn't help but think about my own ancestors, who left behind another place full of poverty and lawlessness and never looked back.


The soldiers I met ranged from veterans with decades of experience deploying on their third or fourth tour to young men and women about to go over for the first time. They all talked about doing their job, sticking to their training and their duty to their unit. The rigorous code of a volunteer military, which does a decent - but not perfect - job of hiding the undeniable attraction of doing something out of the ordinary, of escaping the mundane boundaries of job and home, of having an adventure, though no one would ever dare to use that word.


Driving away from one of the training villages, we passed a huge field of rubble that covered acres of desert. We were told that this was what happened to old village buildings when they outlive their usefulness.

Our flight back was delayed so we ended up spending more time at Fort Irwin than we expected. I went to the camp PX - in reality a shopping mall - and got an honest-to-heck military haircut. The lady reporters all went to Vegas for a night so I went to see Robert Downey Jr. in Sherlock Holmes at the movie theatre with the other media guys, then played a few games at the bowling alley. On Sunday morning I went to church.

I came home from Fort Irwin with a vicious cold, an hour of interviews and pages of notes, a couple of souvenir t-shirts for my kids and hundreds of photos. I began calling and e-mailing everyone I thought might be interested in the story; some of them got back to me, but most of them didn't.

The closest I got was the editor at the national daily who said that he'd already turned down permission for one of his salaried reporters to go on the junket, and that it would create friction in the newsroom if he bought my piece. After nearly twenty-five years in the business, it was frustrating and depressing how hard it was to get work published. This is the first time anyone has seen these photos.

Posted by rick mcginnis at 7:25 AM